No. 4 Baylor holds on for 71-68 overtime win over Texas Tech 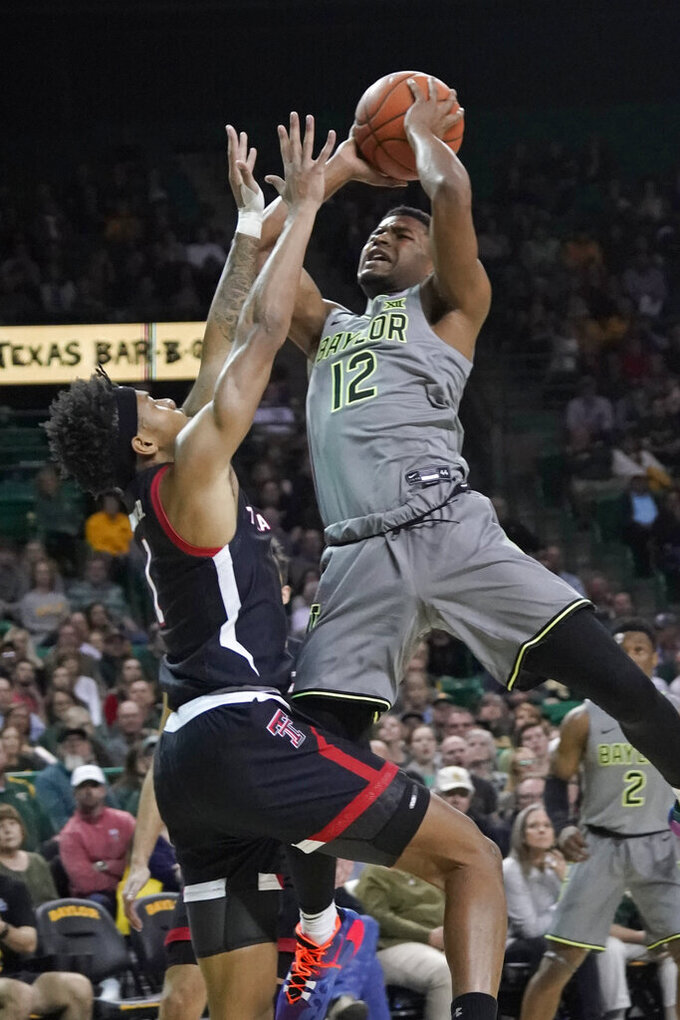 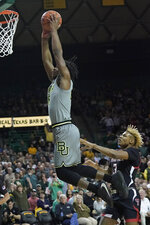 WACO, Texas (AP) — With the shot clock winding down in overtime and a defender in his face, Baylor guard MaCio Teague quickly stepped back behind the line and hit a 3-pointer.

“That was crazy, saved the day like Superman," Bears guard Jared Butler said.

Teague made that big shot with 1:13 left in overtime, and Butler made two free throws after his steal with 11 seconds left as the No. 4 Bears held on for a 71-68 win over Texas Tech on Monday night that kept them in contention for their first Big 12 title and a No. 1 seed in the NCAA Tournament.

After Teague's 3 made it 69-65, Kyler Edwards hit a 3 for Texas Tech to cut the lead to one. The Red Raiders then had a chance to take the lead after Freddie Gillespie missed inside. But short-handed Baylor (26-3, 15-2 Big 12) was able to seal the win after Butler's steal when Chris Clarke tried to make a pass inside over the Baylor guard, who was quickly fouled.

Devonte Bandoo had 18 points and Butler 17 for the Bears, who had lost two of their previous three games after a Big 12-record 23-game winning streak that had knocked them out of the No. 1 spot in the AP Top 25 poll. Teague had 14 points, five in overtime, and Freddie Gillespie grabbed 10 rebounds.

“It was tough losing to TCU (on Saturday). ... Guys are banged up and it was a quick turnaround,” Butler said. “It just takes the will to win, and commitment. There’s nothing you can draw up for this win. It’s just the will to win and that’s what you saw.”

Davide Moretti was tightly defended by Davion Mitchell, despite his four fouls, when he took a wild 3-pointer at the end that wasn't close for Texas Tech (18-12, 9-8).

“I thought our all of our players played with a lot of courage and really wanted to win tonight, gave ourselves a chance to win,” Tech coach Chris Beard said. “And certainly with our turnovers, I thought a lot of those came late, just pressing plays."

The Red Raiders had 20 turnovers, with several key miscues late in regulation and then in overtime.

Jahmi'us Ramsey and Kevin McCullar each had 13 points for Texas Tech, while Moretti had 11. Ramsey made 3-pointers on each of his first three shots early in the game.

McCullar made a 3-pointer from the right corner to put Tech up 60-57 with 1:56 left in regulation, but Baylor quickly got even when Bandoo made a 3 with 1:40 left. But both teams had two turnovers without scoring again until overtime.

Moretti had a bad pass with just under a minute left, with Gillespie coming away with the steal. But Baylor gave it right when Bandoo threw a cross-court pass that went out of bounds even though it looked like the ball may have deflected off Moretti's outstretched fingers — though the ball went to the Red Raiders, as called, after an extended replay review.

So Tech had 36 seconds left, and was deliberate with its possession, but lost the ball inside with 6 seconds left. But Baylor missed the chance for a final-shot victory when Mitchell slipped and lost control of the ball on a drive and traveled with a second left.

Baylor was without starter Mark Vital, their defensive specialist, and Tristan Clark, both because of knee issues. Vital missed initially hurt last week against Kansas State, and then managed to play 21 minutes in Saturday's loss at TCU. He was on a stationary bike late Monday in hopes of maybe getting in the game. Clark missed the second half of last season after knee surgery, and this was his seventh game he has missed throughout this season.

Texas Tech: The Red Raiders, last year's Big 12 co-champion and national runner-up, are 0-25 all-time on the road against top-five AP teams. They have a three-game losing streak. They snapped their only other three-game losing streak this season in December with a win over then-No. 1 Louisville. Their next opponent is No. 1 Kansas.

Baylor: The Bears still have a chance for their first Big 12 title if Kansas loses a game this week, they are also still in contention for a No. 1 seed in the NCAA Tournament.

Texas Tech had 22 personal fouls, nine more than Baylor, leading to significant difference in free throw attempts. The Bears were 15-of-23 on free throws, even after missing their first five after halftime, while Tech was 9-of-11 from the line.

“The free throw differential and the foul differential was really the difference in a game,” Beard said. “I trust these Big 12 officials, they're all really good at what they do. But I'll have to go back and watch the film and see exactly what was going on. We were trying to be very aggressive on offense as they were too."

Texas Tech closes the regular season Saturday at home against No. 1 Kansas.

Baylor travels to West Virginia to close out its season Saturday.