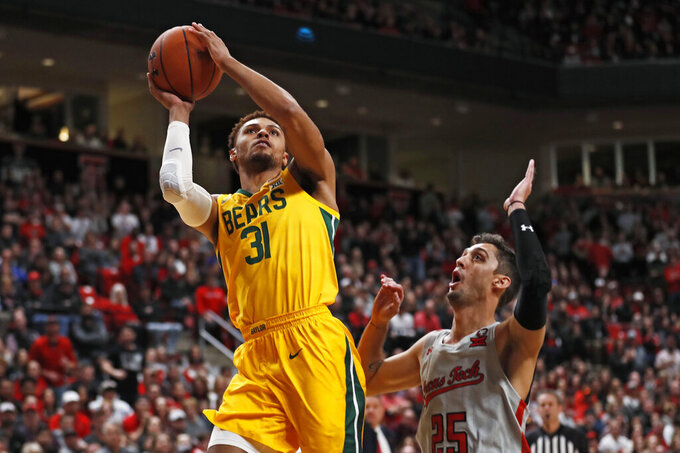 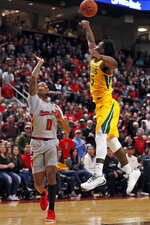 LUBBOCK, Texas (AP) — Davion Mitchell scored 14 points, Mark Vital grabbed 13 rebounds and No. 4 Baylor stretched its winning streak to 11 games with a 57-52 win over No. 22 Texas Tech on Tuesday night.

Texas Tech (10-4, 1-1) lost at home for the first time in nearly a year. The Red Raiders had won 15 consecutive home games since a loss to Iowa State last Jan. 16, and are 58-6 at home under fourth-year coach Chris Beard.

Freshman Jahmi'us Ramsey led the Red Raiders with 20 points, and Kyler Edwards had 10.

Jared Butler, Baylor's leading scorer had only five points — more than 12 below his season average. But he made his first basket on a layup with 3:48 left, and then added a jumper 42 seconds later for a 51-45 lead.

The rest of Baylor's points came at the free throw line, with five in the final 24 seconds. That included after a technical foul against the Red Raiders for reaching across and touching the ball before an inbound pass.

In a defensive game, Texas Tech had a 9-7 lead on a Ramsey layup with 12:39 left in the first half. Baylor then scored the next eight points, including two baskets by Gillespie, and never trailed again.

Baylor: The Bears went into a hostile environment and took care of business. Baylor focused in on their mismatches and never looked back. They used their size advantage for a 44-25 rebounding margin.

Texas Tech: The Red Raiders saw their weakness exploited as the Bears controlled the paint. Texas Tech doesn't really have a big man inside. Ramsey had 20 points on 7-of-17 shooting and Davide Moretti struggled to eight points on 3-of-11 shooting — 0-for-6 on 3s.

Baylor is at No. 3 Kansas on Saturday.

Texas Tech plays three of its next four games on the road, the first coming Saturday at No. 17 West Virginia.