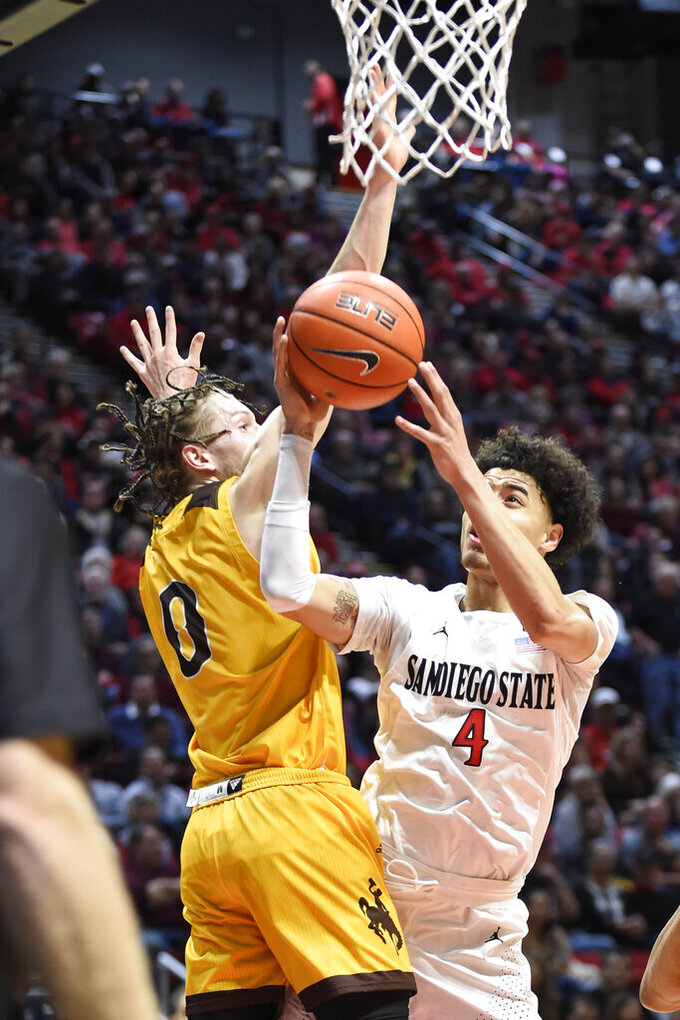 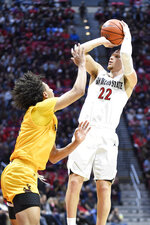 SAN DIEGO (AP) — With transfers Malachi Flynn and Yanni Wetzell once again leading the way, No. 4 San Diego State improved to 20-0 to match Kawhi Leonard's 2010-11 team for the best start in school history.

Like that team, though, this squad wants a whole lot more.

Flynn scored 18 points and Wetzell dominated inside with 14 points for San Diego State, which opened with a suffocating defense to beat Wyoming 72-55 Tuesday night.

“It's good to realize we're up there with arguably probably the best team here,” said Flynn, a junior guard who transferred from Washington State. “But like we've said previously, they didn't stop there. They went on to a Sweet 16. We've got a lot more work to do to even be in the conversation with that team still."

Matt Mitchell agreed, saying the comparison with Leonard's team is “great notabilty to be up there, but we don't get a banner for 20-0. We've got to keep pushing."

SDSU also matched the longest winning streak in school history, set with that opening run in 2010-11 and matched by the 2013-14 team, which also reached the Sweet 16.

The Aztecs played tight defense from the start, sparking an offensive outburst that gave them a 20-9 lead. Flynn and Mitchell hit early 3-pointers and Flynn stole the ball for a coast-to-coast slam dunk. Mitchell had a three-point play and a 3-point shot.

Coach Brian Dutcher rested four starters midway through the first half, allowing Wyoming to close to 20-15 after Hendricks scored nine straight points, making two 3-pointers and making three free throws after he was fouled taking a shot from behind the arc.

With all five starters back in after a timeout, SDSU went on an 11-2 run to pull away. Flynn started it with a step-back jumper and Wetzell, a graduate transfer from Vanderbilt, had three layups, including one after a steal by Flynn. Jordan Schakel added a 3.

SDSU took a 20-point lead with five minutes to go, but Dutcher wasn't happy with a few things, saying Wyoming had a hand in dictating the low-possession game.

“We gave up some second shots I didn't much care for," Dutcher said. “I told them, I was pretty heated in a timeout or two and I told them, ‘I'm mad and it has nothing to do with this game. There are going to be possessions down the road when we're in a one- or two-possession game and those things can't happen. So understand when I tell you this, I'm happy we're ahead and I'm happy we're playing pretty good, but we have greater goals ahead of us and we can't make the mistakes we're making right now.' “

Dutcher, an assistant to Steve Fisher on the 2010-11 team, said it's a “tremendous honor to be compared to such a great team. But this team has it's own identity and it's own goals and it feels good, but they don't hang banners for 20-0, only for conference championships and we're trying to win a Mountain West title and that's our goal right now."

SDSU got a scare when Aguek Arop apparently tweaked a shoulder injury midway through the second half and didn't return. Dutcher said. Arop told the team afterward that he was fine."

“They truly play well together, and they have a special talent in the kid Flynn. His presence on the floor really makes a difference.”

Dan Gavitt, NCAA vice president of basketball and Mitch Barnhart, Kentucky’s athletic director and vice chair of the Division I men’s basketball committee, attended the game. They are in Southern California for the NCAA convention, “so we saw this as a great opportunity to come down and see the Aztecs,” Gavitt said at halftime. “I’ve watched them about five times on TV this season, but it’s great to get to see them in person."

SDSU started the day at No. 2 in the NCAA NET Rankings, which replaced RPI as the primary method for NCAA Tournament seeding. ESPN.com projects the Aztecs as the No. 1 seed in the East Region and CBSSports.com has them as No. 1 in the Midwest.

SDSU moved up three spots to No. 4 in The Associated Press Top 25 on Monday, matching the highest position in school history. The Aztecs were No. 4 briefly in 2011 before their 20-game winning streak ended with a loss at BYU, and they dropped to No. 7.

Wyoming: The Cowboys are last in the MWC. They were swept by SDSU in the season series. SDSU beat them 72-52 in Laramie on Jan. 8.

San Diego State: The Aztecs remain without center Nathan Mensah, who missed his seventh straight game with a respiratory ailment.

San Diego State is at UNLV on Sunday.