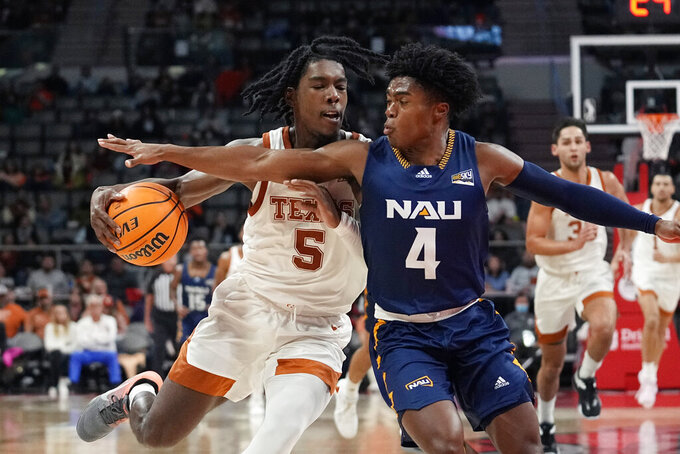 “Maybe as important as the game tonight was bringing Texas and our brand and our program down to the Valley, and I thought that was awesome,” Longhorns coach Chris Beard said.

Carr had 10 of his points when Texas (4-0) scored 17 in a row for a 41-11 lead late in the first half. Dylan Disu had an alley-oop dunk on a pass from Tyrese Hunter to start that five-minute stretch before Carr had back-to-back 3-pointers.

Texas played for the first time since its 93-74 dismantling at home last Wednesday over then-No. 2 Gonzaga. The Longhorns moved up seven spots in the new AP Top 25 earlier Monday, while the Bulldogs dropped four spots to sixth.

Xavier Fuller had 15 points for Northern Arizona (2-4), which finished with more turnovers (21) than made field goals (17).

“I look at our players as a basketball family, and in the first half, I thought we got punked. I was honest, and we got after them at halftime," Northern Arizona coach Shane Burcar said. “The score is irrelevant to us, but I think they got the message. ... We need a few more players to step up and be a little bit more edgy. They all got the message.”

“We played really well in the first half, and in the second half, it was not our better 20 minutes,” Beard said. "I was really impressed with Northern Arizona how they kept chipping away and basically played real basketball in the last 20 minutes. So lots to learn from for our guys and we’ll embrace that.”

The game was played in the home arena of the NBA G League's Rio Grande Valley Vipers, which is about 300 miles south of the Longhorns campus home in Austin, and not far from the U.S.-Mexico border.

The game was part of the Leon Black Classic honoring the former Longhorns player and coach who passed away last year at age 89.

“One of the all-time great coaches, great men, great former players, great assistant coaches and obviously great head coaches that our program’s ever had,” Beard said. "And a trailblazer in our sport, gave so many opportunities, first black players to play at Texas. It’s just awesome to honor coach and his family.”

Northern Arizona: The Lumberjacks of the Big Sky Conference led only once, when Fuller made a floater on the game's first shot. That lead lasted 18 seconds before Texas scored eight points in a row.

Texas hosts UT Rio Grande Valley on Saturday on the Austin campus, but that game won't be played at the new Moody Center. It will be at Gregory Gymnasium, where the Longhorns played home games until 1977, and their home when Black was head coach from 1967-76.