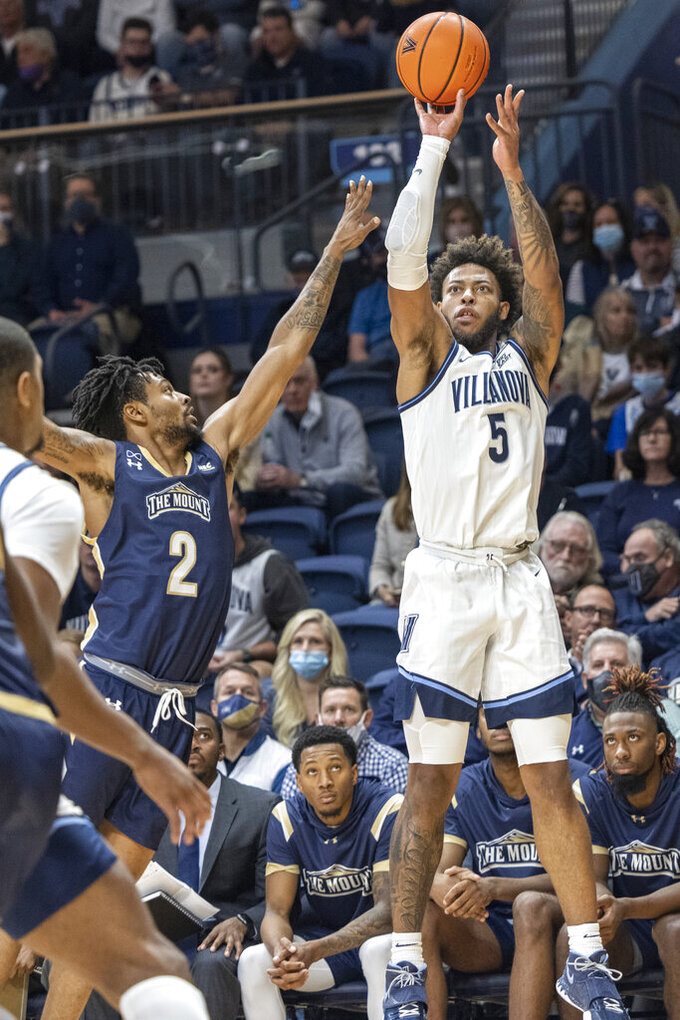 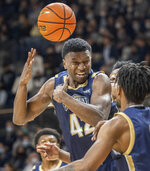 VILLANOVA, Pa. (AP) — Jay Wright pulled a stat sheet over toward Collin Gillespie and whispered at the star guard for No. 4 Villanova, pointing at a couple of gaudy numbers.

Gillespie and Justin Moore combined for 12 assists and no turnovers on Tuesday in a season-opening 91-51 win over Mount St. Mary's.

Gillespie scored 13 points in his first game back since suffering a torn MCL in his left knee. Moore hit six 3-pointers and scored a career-high 27 points for the Big East favorite Wildcats. Brandon Slater and Jermaine Samuels each added 17.

Villanova needed the tune-up headed into a stacked nonconference schedule that includes the Bruins later this week. They'll play for only the sixth time and first since 2010.

“I think we're ready to play a team like that,” Wright said. “They're a great team. It doesn't mean we're ready to beat them. But I think it's a good time for us. This older group, they've been kind of beating each other up in the offseason for a while.”

Gillespie, who played on the 2018 national championship team but was injured last season on senior night, decided to return for a fifth season thanks to the rule that grants players an extra year of eligibility. He was cleared for workouts in August and made the AP preseason All-America team.

He hit an early 3-pointer on Tuesday and received the loudest ovation of the game from a raucous student section that's back this year and locked arms and swayed during pregame introductions.

“Today was just another day playing with my teammates,” he said.

And just another Villanova beatdown in the opener. The Wildcats, who according to FanDuel Sportsbook closed as 25.5-point favorites, opened the game on a 10-0 run and were never threatened. They hit 16 3s against only six turnovers.

The Mount made the NCAA Tournament’s First Four last season on the strength of a defense that allowed just 62.2 points per game. The Wildcats hit that mark with 11:50 left in the game, as Moore got a 3 for a 62-35 lead.

“We weren't looking for me specifically,” Moore said of his big game. “We were just trying to come play together and set the tone defensively and that helped us get into our offense.”

Wright won his 613th career game — and first as a Hall of Famer. Wright helped lead Team USA to an Olympic gold medal as an assistant under coach Gregg Popovich, then the 59-year-old Wright was inducted into the Naismith Memorial Basketball Hall of Fame. Not a bad summer break.

“They made us pay today,” coach Dan Engelstad said. “I think the lights, the crowd, we didn't settle in for a little bit. It took us a couple of minutes. But once we settled in, I thought there was some really bright spots, some good moments. You could see what we already know, that we do have a very good basketball team that can play at a high level.”

Villanova has late November games in the Hall of Fame Tipoff Classic against No. 18 Tennessee, and then a game in the same tourney against either No. 19 North Carolina or No. 7 Purdue. Villanova also plays Syracuse in the Jimmy V Classic in December at Madison Square Garden and then a Dec. 12 rematch at No. 8 Baylor.

Villanova: The Wildcats moved to 20-1 under Wright in season openers and have won the last 19.

The Mount: Host Washington College (Maryland) on Thursday and return to Philadelphia on Saturday for a game at Saint Joseph’s.

Wildcats: Play at No. 2 UCLA on Friday night.