No. 5 Baylor preseason B12 favorite for Drew's 20th season 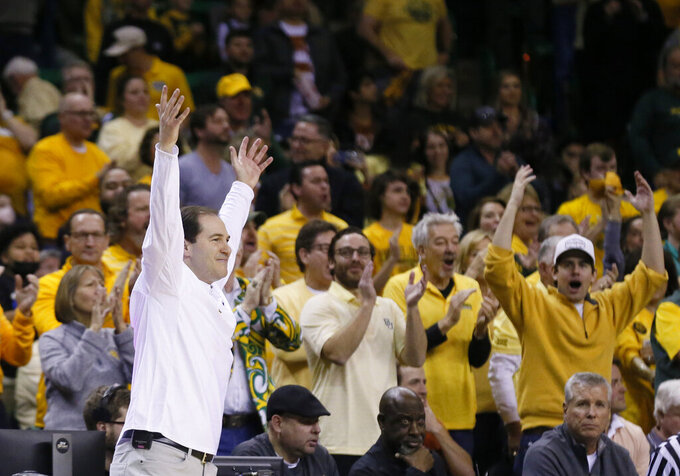 FILE - Baylor coach Scott Drew tries to fire up the crowd during the first half of the team's NCAA college basketball game against Texas on Feb. 12, 2022, in Waco, Texas. Drew goes into his 20th season at fifth-ranked Baylor, which has become a perennial NCAA Tournament contender is the preseason Big 12 favorite after being part of the conference’s last two regular-season titles. (AP Photo/Ray Carlin, File)

When defending its national championship last season, Baylor lost a top newcomer to an injury in the first scrimmage. A lingering foot injury eventually shut down a leading scorer, and the player known as “Everyday Jon” suffered a devastating knee injury.

Through all of that, after the departure already of a talented trio of guards from the title team, the Bears still won a share of their second consecutive Big 12 regular-season crown and were a No. 1 seed in the NCAA Tournament. They overcame a 25-point deficit in the second half of their second-round game not far from home before falling in overtime to the eventual national champion.

Even with another restructured roster, Scott Drew goes into his 20th season as the Baylor coach with his fifth-ranked Bears the preseason Big 12 favorite.

“Really like the returning upperclassmen,” Drew said. “The new guys are really bought in, and really great additions. The chemistry has been tremendous, and our staff really enjoys going to practice every day, working with our guys because they want to get better. Couldn't ask for more.”

Leading scorer Adam Flagler (13.8 points per game) and big man Flo Thamba (6.2 points, 5.6 rebounds in 20 minutes per game) are the only returning starters. Guards LJ Cryer and Langston Love were cleared for practice, though post Jonathan Tchamwa Tchatchoua is still recovering from surgery to repair multiple torn ligaments in his left knee.

The Bears added transfer forwards Jalen Bridges (West Virginia) and Caleb Lohner (BYU), and their highest-ranked recruit ever: Keyonte George, a Texas kid who was a five-star guard at IMG Academy in Florida and was picked as the preseason Big 12 freshman of the year.

Cryer was in and out of the lineup because of his surgically repaired right foot, but still led the team in scoring (13.5 ppg) when he played his last game in mid-February. Drew expects Love, the 6-foot-5 guard who tore his ACL in the first scrimmage before last season, to have a big impact on the program though he will need some time to get back to game speed.

“He’s a tremendous competitor," Drew said. "He’s a connector. He brings people together — everybody, upperclassman, new players, staff have such respect for him.”

The versatile Flagler is set to take over at point guard.

“We all know he’s a great shooter, scorer, but he’s going to have an opportunity to show that he can run a team," Drew said. "He can play on and off the ball, but he really takes care of the ball and he really does a great job pitching ahead in transition. ... Guys like playing with someone who moves the ball like he does.”

During their championship season, the Bears had the selfless trio of standout guards Jared Butler, Davion Mitchell and MaCio Teague. Baylor now has another pretty talented backcourt with Cryer, Flagler, George, Love and Dale Bonner, the transfer from Division II Fairmont State who turned into a key rotation player last season.

Baylor lost a pair of one-and-done players, with forward Jeremy Sochan and guard Kendall Brown being NBA draft picks after their freshman seasons. Point guard James Akinjo was also there only one season after being a graduate transfer from Arizona.

All the newcomers were part of the Bears' summer trip to Canada for GLOBL Jam, where they represented the United States and advanced to the finals after upsetting host Canada.

“I just feel like we came together as one early,” said George, who averaged 22.8 points in those games. “So we're better than a lot of college teams right now.”

Baylor will be in Sioux Falls, South Dakota, on Dec. 2 to play second-ranked Gonzaga in a rematch of the 2021 NCAA championship game that the Bears won 86-70. After three consecutive home games to open the season, they go to Las Vegas to play No. 18 Virginia on Nov. 18, then No. 8 UCLA or No. 23 Illinois two days after that. Their Big 12 opener is at Iowa State on New Year's Eve.