No. 5 Duke rolls after Citadel coach taken to hospital 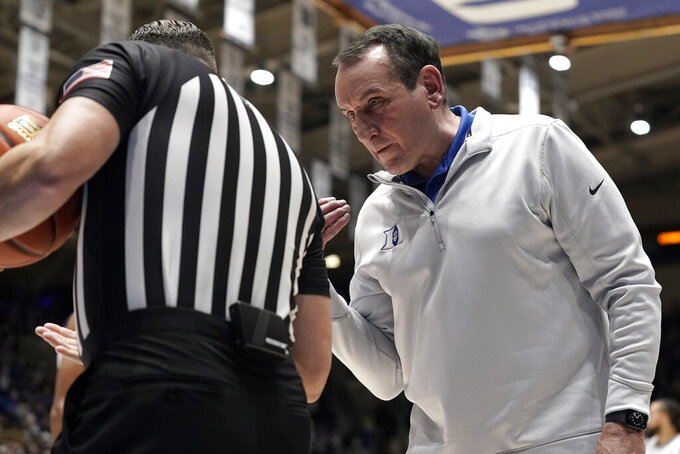 Duke head coach Mike Krzyzewski speaks with an official during the first half of an NCAA college basketball game against Citadel in Durham, N.C., Monday, Nov. 22, 2021. (AP Photo/Gerry Broome)

DURHAM, N.C. (AP) — No. 5 Duke beat The Citadel 107-81 Monday night after Bulldogs coach Duggar Baucom collapsed on the court barely a minute into the game and was taken to a hospital.

Baucom fell along the sideline and was taken to Duke University Hospital. The 61-year-old Baucom was conscious as he was helped out of the gym by medical personnel.

“All things considered, he’s as good as he can be,” associate head coach Jake Castleberry said. “He was coherent the entire time. ... He just said he was in pain.”

Team spokesman John Brush said later that Baucom was in good spirits and would remain in the hospital overnight. He’ll return with the team Tuesday morning to Charleston, South Carolina.

The Citadel’s Hayden Brown scored off an offensive rebound just before play was stopped for Baucom, who is in his seventh season at the school. Castleberry took over on The Citadel’s bench.

The Bulldogs dealt with the incident by refocusing quickly.

“When you go to school at The Citadel, you face some pretty challenging stuff,” Castleberry said. “As scary as that is and as ... terrifying. They know they got to push through. That’s what you’re taught day-in and day-out.”

Freshman forward Paolo Banchero scored a career-high 28 points and Wendell Moore Jr. had 22 for Duke (6-0), which completed a five-game homestand with five double-digit victories. It was the Blue Devils’ last tuneup before Friday night’s clash with top-ranked Gonzaga.

“Paolo was really strong with the ball,” Duke coach Mike Krzyzewski said. “We’re a different team when he’s like that.”

Mark Williams added 14 points, Trevor Keels had 11 and Jeremy Roach had 10 for the Blue Devils.

The Citadel made 18 baskets from 3-point range, setting a Cameron Indoor Stadium record for an opponent. Duke has made 18 3s twice in the building.

“So our team is going to have that memory with them for the rest of their lives,” Castleberry said.

The Bulldogs took 34 attempts from 3. Brent Davis made five and Brown had four.

“I didn’t think our defense was horrible on the 3,” Krzyzewski said. “They just knocked them down.”

Brown and Davis both scored 19 points and Stephen Clark had 16 points.

Duke had 25 assists compared to three turnovers. The Blue Devils were 27 for 29 on free throws.

The Blue Devils finished with a 46-29 rebounding edge, with Banchero and Moore each pulling in eight.

The Blue Devils opened the second half on a 15-6 surge to extend what had been a 52-42 halftime lead. Banchero had 13 points by the break.

“When Paolo is playing like that, we’re going to be one tough team to stop,” Moore said.

The Citadel: Duke kept its previous four opponents to less than 60 points, a mark The Citadel reached with 10:16 remaining. But the Bulldogs, who opened the season by winning at Pittsburgh, weren’t able to defeat another Atlantic Coast Conference opponent.

Duke: The Blue Devils have had plenty of chances to work out their kinks the past couple of weeks. They won’t play at home again for another three weeks. They posted a season-high point total.

Banchero, a top NBA prospect, spoke to reporters for the first time since he was charged with aiding and abetting impaired driving during a Nov. 14 incident that involved teammate Michael Savarino, who’s Krzyzewski’s grandson.

“My teammates had my back, so it wasn’t too hard for me,” Banchero said. “I’m not going to say it wasn’t on my mind the past two games. It was. I feel like today was bounce-back game for me and I felt good out there.”

He had his two lowest-scoring games (10 and 11 points) since the incident prior to Monday.

Savarino was charged with driving while impaired and driving after consuming under the age of 21. He has been suspended from team activities.

“We all learned from it,” Banchero said. “I can’t really say much about it. We learned from it and we handled it as a team. We’ve moved on. We want to get on with our season.”

Duke: vs. No. 1 Gonzaga on Friday night in Las Vegas.