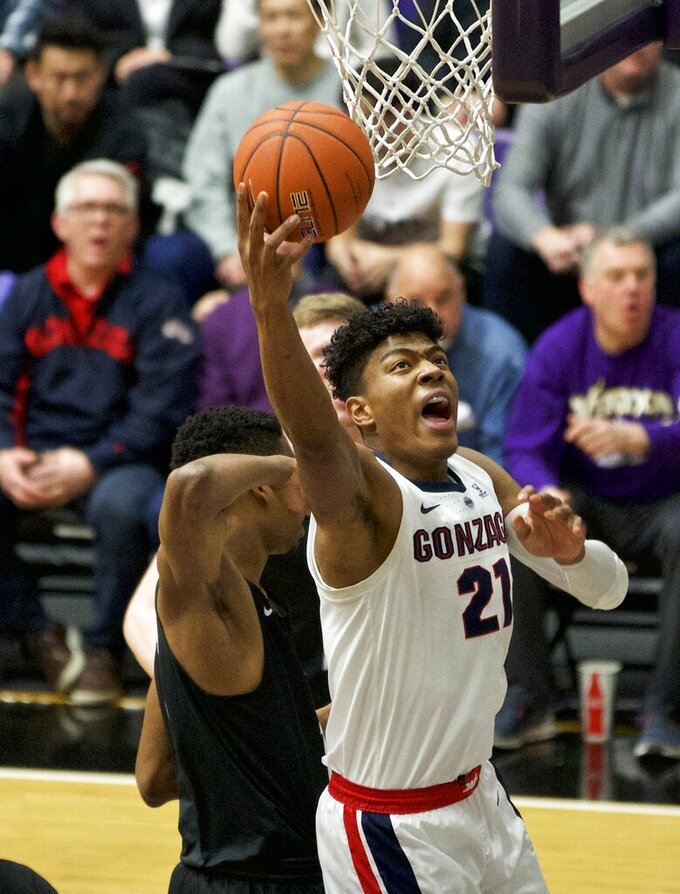 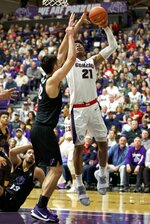 PORTLAND, Ore. (AP) — Rui Hachimura said it felt like Gonzaga was a bit hurried in the first half against struggling Portland before settling down for a more typical Bulldog win.

"Before the second half, we talked about passing more and using our teammates. I think the second half we did pretty well with ball movement," the 6-foot-8 sophomore said.

Hachimura had 17 points and nine rebounds and No. 5 Gonzaga extended its winning streak to nine games with an 89-66 victory over Portland on Saturday night.

Zags coach Mark Few said he thought it was something of an uneven win.

Geno Crandall's 3-pointer made it 69-49 with just over eight minutes left in the game, and seven of the Bulldogs finished in double figures.

The Bulldogs were coming off a 73-55 victory at home over Loyola Marymount on Thursday night. Gonzaga's two losses this season came in December when they dropped back-to-back games to No. 3 Tennessee and No. 13 North Carolina that knocked them out of the No. 1 spot in the AP Top 25.

Shaver had back-to-back games with more than 20 points going into Saturday's game. He had 21 in the Pilots' 76-55 loss at home to San Diego on Thursday.

"The formula is there, I'm hoping this is kind of a springboard for us. I think our guys understand the importance of how hard we've got to play, how much energy we've got to bring and how we've got to help each other," Porter said.

Gonzaga stretched the lead to 20-11 on Killian Tillie's layup. Tillie, a 6-foot-10 junior who averaged 12.9 points per game last season, was playing in his fifth game since his return from ankle surgery just before the start of the season. He finished with 10 points.

Portland closed to 22-15 on Shaver's layup, but the Bulldogs went on an 11-2 run capped by Hachimura's jumper to go up 33-17 with just under six minutes left in the first half.

Gonzaga led by as many as 18 points and ended the opening half ahead 41-26. Hachimura, who went into the game averaging 20.2 points a game, led all scorers with 11 points at the break.

Shaver's 3-pointer got the Pilots to 48-36 in the second half, but Brandon Clarke's dunk stretched the margin for the Bulldogs to 57-39.

The game was a sellout and there appeared to be more Gonzaga fans at the Chiles Center than Pilots fans. Among them was former Bulldog Zach Collins, who now plays for the NBA's Trail Blazers.

Gonzaga: Gonzaga's winning streak on the road in conference games is the longest in the nation. ... Gonzaga and Marquette are the only programs with both their men's and women's teams ranked among the top 15. Gonzaga's women are ranked No. 13, the best in team history. ... The Zags, who have won 17 of the last 18 conference titles, went into the game outscoring WCC opponents by 26.3 points.

Portland: The Pilots do not have a senior on their roster. ... Former Portland State coach Tyler Geving joined the Pilots as an assistant under Porter this season.

Gonzaga freshman Matt Lang saw some playing time in the waning moments of the game and smiled broadly when he scored a layup and made a free throw for the hometown crowd. Lang is a Portland native who went to Jesuit High School. It was his seventh appearance in a game this season.

"I didn't think I'd get a chance to get in because it was so late. Then I saw the opportunity to crash the boards offensively and I just went for it and took it by instinct and finished it," he said.

Few went big at times during the game, going with Hachimura, Tillie and Clarke.

"They'll come in there some, but until they can start defending better as a group, I mean, we probably won't use it that much," Few said.

Hachimura said he expects that the group will make progress as the season goes on. "I think they're going to play us more like that," he said.