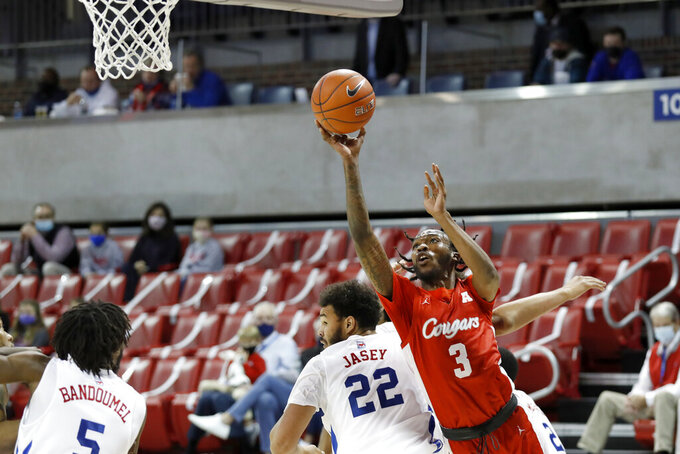 DALLAS (AP) — Houston coach Kelvin Sampson spent a lot of time at halftime talking to his team about rebounding and being aggressive. The No. 5 Cougars responded.

“The second half, I just liked our execution, I liked the ball movement and I liked our rebounding,” Sampson said. “We looked like a Houston basketball team.”

Quentin Grimes hit a go-ahead 3-pointer to ignite a 10-0 run to start the second half, and the Cougars rebounded from their first loss with a 74-60 victory over previously undefeated SMU on Sunday night.

The Cougars (8-1, 3-1 American) had 28 of their 45 rebounds after halftime, with 11 offensive boards and 15 second-chance points after the break. Justin Gorham had 13 of his 19 rebounds in that span.

“One of the hallmarks of this team is you stay on the attack, especially on the road,” Sampson said. “We scored 21 points (overall) on second-chance points. That's who we are.”

SMU coach Tim Jankovich said he was disappointed after spending so much time before the game emphasizing to his Mustangs (6-1, 2-1) how well Houston rebounded.

"That’s the reason we lost. It wasn’t for no other reason,” said Kendric Davis, SMU's top scorer with 23 points. "We guarded the first shot great. They just got too many offensive rebounds.”

That 3-pointer by Grimes from the top of the key to put Houston ahead to stay on the first shot after halftime and Justin Gorham then made a 3. Grimes also had a layup and two free throws in that game-turning run in just over 2 1/2 minutes.

Feron Hunt had 12 points and 12 rebounds for SMU, and Ethan Chargois scored 10 points.

Grimes, Houston’s leading scorer at 18.5 points a game and second in the AAC only to Davis’ 19.2 coming in, was scoreless with only one shot before halftime, when he played only eight minutes after two early fouls.

SMU had its largest lead after Chargois followed his missed 3-pointer with assists on back-to-back baskets that made it 30-25 with 2:39 left in the first half, though they led by only one at the break.

Hunt rebounded the missed 3, got the ball back to Chargois up top for his quick pass to Davis, who hit a tiebreaking 3. Chargois then had a steal, but instead of going all the way to score, he did an underhand scoop to bank the ball off the backboard to Hunt for an emphatic dunk.

Yor Anei, the transfer forward from Oklahoma State playing only his third game for SMU, had a bad pass with about 3 1/2 minutes left in the first half. Jamal Shead stole the ball and fed an alley-oop pass to Gorham, but he was fouled hard by Anei when going up for the shot. The two big men were tangled up after coming down hard on the floor. Jarreau elbowed Anei after he got up, and there was some other shoves. Jarreau and SMU’s Darius McNeill were both assessed technical fouls.

Houston sophomore guard Caleb Mills has stepped away from the program for personal reasons. Mills had been limited to four games because of COVID-19 and an ankle injury. Asked if Mills would play again this season, Sampson said he didn't know.

“I care more about Caleb than I do whether he plays or not. ... That’s irrelevant to me in the big picture. I want him to be comfortable,” the coach said. “Between COVID and his injuries, he’s just had a lot of stuff going on.”

Houston: The Cougars are one-tenth of a second from still being undefeated. They lost Tuesday night on the road when Tulsa made two free throws with 0.1 left.

SMU: The Mustangs had been 4-0 at home this season, and had won 19 of their previous 21 at Moody Coliseum.

When the Cougars moved up to No. 5 last week, it was their highest ranking since the Phi Slama Jama days with Hakeem Olajuwon when they were No. 5 in the final poll of 1983-84, the same season they lost to Georgetown in the national championship game. With three Top 10 teams losing games Saturday, including No. 3 Kansas, Houston may not fall too far — if at all — after coming back with a win over an SMU team that had been undefeated.

Houston plays five of its next six games at home, starting Wednesday night against Wichita State.

SMU plays the second of three home games in a row Thursday against Cincinnati.