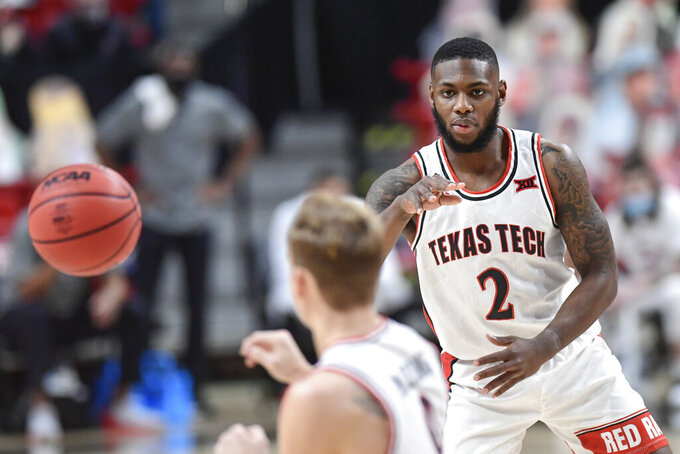 Texas Tech's Jamarius Burton (2) passes the ball to Mac McClung (0) during the first half of an NCAA college basketball game against Kansas in Lubbock, Texas, Thursday, Dec. 17, 2020. (AP Photo/Justin Rex) 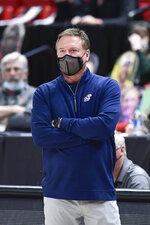 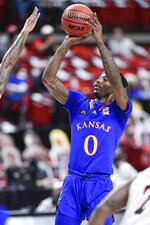 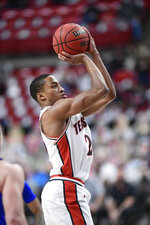 LUBBOCK, Texas (AP) — Ochai Agbaji got wide open again to take an inbound pass and made the go-ahead layup with 13 seconds left to extend a three-decade streak for No. 5 Kansas.

Agbaji finished with 23 points, the last coming after the inbound pass from Marcus Garrett, in a 58-57 win over No. 14 Texas Tech on Thursday night, giving the Jayhawks a victory in their conference opener for the 30th season in a row.

“We ran a play to get Ochai open and he was actually open initially, but the defender was jumping over the ball where I couldn’t get it to him (for a lob). ... I was able to look around, and Ochai was still open,” Garrett said.

“Unbelievable play,” coach Bill Self said. “If we were going to win the game it was fitting that Ochai made the play to win the game because that was probably as efficient a game maybe that anybody has played for us in a long time against a team that really guarded, and their emphasis was to guard him.”

Agbaji was 8 of 11 from the field, including four made 3-pointers, with only one turnover in 34 minutes.

“I think what happens with Kansas, there’s lot of screening going on underneath the basket,” Texas Tech coach Chris Beard said. “You’ve got to find a way to switch under and force people to hit jump shots to beat you, not layups.”

Texas Tech (6-2, 0-1) had one more opportunity after a timeout with 6.2 seconds left. But Terrence Shannon Jr., who had 20 points and nine rebounds, had his mid-range jumper blocked by Jalen Wilson to end the game.

Garrett had 10 points, 10 rebounds and four assists for Kansas, which has never lost a Big 12 opener, and last lost a conference opener during the 1990-91 season in the old Big Eight Conference. The Jayhawks have won 18 of those 30 openers on the road.

“We’ve got a lot of numbers like that ... 18 in a row on the road, that’s something that I don’t know if anybody in America can say they have a stat like that,” Self said.

Shannon finished with four 3-pointers, doubling his previous season total, including one with 34 seconds left that put Tech up 57-56.

Mac McClung led Texas Tech with a season-high 21 points, the third 20-point game for the transfer from Georgetown. But he finished 5-of-16 shooting and had only two free throws in the final 18 minutes.

“This was Mac’s first Big 12 game. It was obvious,” Beard said. “Garrett’s their best defender on the perimeter, they were switching up who Garrett was on. There was a lot of things going on out there in tonight’s game.”

Christian Braun was 0-for-5 shooting and had only two points for Kansas, but grabbed 10 rebounds and had a huge play for the Jayhawks to keep the ball and set up that final inbound play. After David McCormack's miss with 14 seconds left, Braun went after the offensive rebound, and was able to knock the ball off McClung out of bounds.

“Him keeping that ball alive was one of the very best plays,” Self said. “That’s what winners do.”

Kansas: The Jayhawks last season became the first Big 12 team to go 9-0 in conference road games, and their current 10-game streak is the second-longest in league history. Kansas has won seven in a row since opening the season with a 102-90 loss against No. 1 Gonzaga. They were held to a season-low in points while shooting 40.4% from the field against the Big 12′s top scoring defense — Tech had allowed only 51.2 points a game.

Texas Tech: The Red Raiders had only seven turnovers and forced 16 Kansas turnovers, and had 16 second-chance points off 13 offensive rebounds. Those kind of numbers would usually help lead to a win, but the Red Raiders were undone by their own shooting struggles — 32% (20 of 62) and inability to make plays late.

“Sometimes you just tell your team in the locker room, ‘Hey, let’s put ourselves in position the next game. Great fight tonight.’ I don’t feel that way about tonight’s game,” Beard said. “I think a lot of it was self-inflicted. Nothing disrespectful to Kansas obviously, but I thought we had chances to win the game tonight and we didn’t win the game.”

Kansas is at home to play No. 8 West Virginia on Tuesday night.