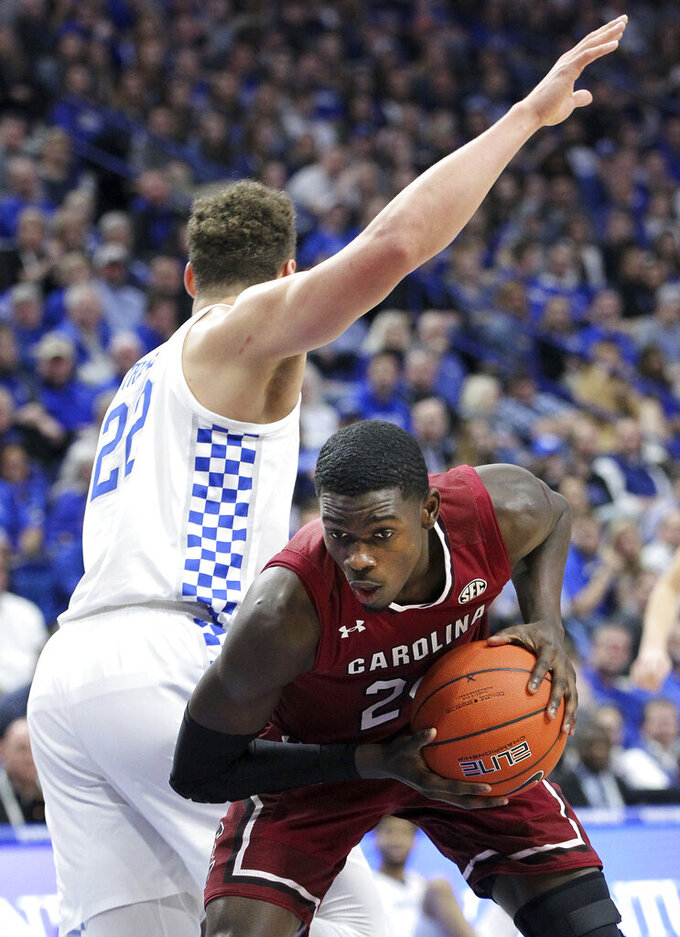 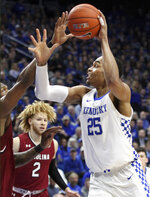 The Wildcats (19-3, 8-1 Southeastern Conference) shot just 41 percent but held the Gamecocks to just 28 percent in the second half and 36 percent overall. It was the seventh time in eight games they've held an opponent below 40 percent. Kentucky outscored 17-4 over the final 5:14 to lead 39-28 at the break and stretched its advantage to 29 with 3:23 remaining.

Washington fell short of his fourth consecutive double-double but posted his fourth 20-point game in the past five. He also had five rebounds and two steals.

"Defense is a big part of why we're winning," Washington said. "We're stopping teams and forcing them to get out of their game plans, and it's great to stop teams like that."

Tyler Herro, Reid Travis each added 11 points for the Wildcats, but freshman forward EJ Montgomery might have been the happiest contributor after the kind of performance coach John Calipari suggested was possible.

Montgomery came off the bench to post career highs of 11 points and 13 rebounds, his first career double-double. Kentucky dominated South Carolina 50-27 on the glass and forced 19 turnovers leading to 26 points.

"I just kept my head up, stayed focused and kept working," said Montgomery, who had an assist, block and a steal in 20 minutes. "I knew my time was coming, and I guess today was the day."

Added Calipari, "This was a game for him to prove it against a really physical team."

The Wildcats stayed within a game of the conference lead in the process and improved to 28-2 at home against the Gamecocks (11-11, 6-3).

A.J. Lawson and Tre Campbell each had 12 points for South Carolina, which lost for the fourth time in six games.

It was also the Gamecocks' fourth defeat this season against a top-five opponent, and this one quickly slipped away early in the second half. After consecutive layups by Chris Silva and Lawson, they missed their next 10 attempts and 17 of 19.

"We continue to struggle with physicality," he said. "They screen and (lack of physicality) has been our problem all year. Rebounding is just a stat that represents physicality.

"We're not a physical team (and) anytime we play a team that plays with any kind of physicality, we don't answer the bell."

South Carolina: The Gamecocks held their own for a while in the first half, even with leading scorer Chris Silva on the bench with two quick fouls 12 seconds apart. He finished with four points, four rebounds and four fouls. Things fell apart late in the first half and they could make little from the field in the second. They also struggled at the line, making just 5 of 14.

Kentucky: It wasn't a pretty game offensively, just effective when it had to be. Most importantly, the Wildcats gave no ground on the boards or in the paint against an opponent that usually gives them a tough game.

"We played good today," Calipari said. "I loved our toughness, especially from our young guys."