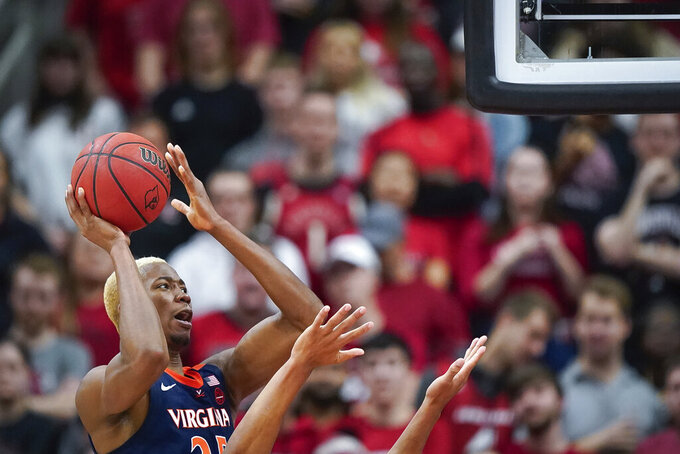 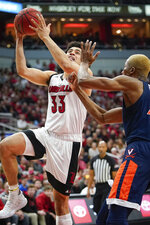 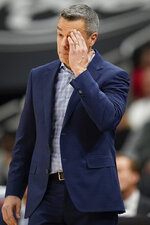 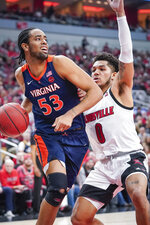 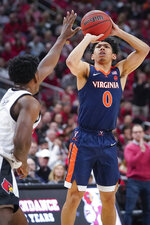 LOUISVILLE, Ky. (AP) — Louisville's latest quest to end its frustration against Virginia appeared close to slipping away again as the Cavaliers had momentum and a late lead.

It took the No. 5 Cardinals just 38 seconds to reclaim it for good by forcing action down low, getting to the foul line and converting frequent opportunities. That helped them finally end a run of losses to Virginia and extend their current hot streak.

Steven Enoch scored 13 points, including the go-ahead free throws with 2:47 remaining, and David Johnson, Ryan McMahon and Malik Williams combined for eight more from the line to lift Louisville past Virginia 80-73 on Saturday for its 10th consecutive victory.

The Cardinals (21-3, 12-1 Atlantic Coast Conference) led most of the way before the Cavaliers stormed back to go ahead 70-68 on Kihei Clark’s two technical free throws with 3:25 left. Johnson’s jumper tied it before Enoch's two free throws put Louisville ahead for good.

Williams and Johnson each made one from the line before later adding two each to seal a hard-fought victory against Virginia after nine consecutive losses. McMahon sandwiched two in between as Louisville finished 21 of 24 from the line after shooting none in the first half.

“We've had a bunch of chances to beat them, and somehow they always find a way to win,” forward Jordan Nwora said. “It was good just being able to finish the deal today.”

Nwora had four 3-pointers and 22 points for Louisville, which finished shooting 51% despite hitting just 37% in the second half. Williams was 7 of 8 from the line for 13 points including the final two with 11.9 seconds left.

Louisville also outscored Virginia 26-18 in the paint on the way to posting a season high against the nation's top scoring defense. The Cavaliers entered allowing just 50.4 points per game and holding opponents to 36% shooting, which held form in the second half as the Cardinals hit just 7 of 19 and 1 of 7 from beyond the arc.

Louisville kept pounding and drew 15 second-half fouls before hitting free throws that ultimately made the difference against a team that had won four of five on the Cardinals' home floor.

“It was really tough,” Williams said of the Cavaliers. “They're a disciplined team, a pack(-line defense) team like us, so it's hard to penetrate the lane. I think we did a good job, with Steve posting deep and getting the ball inside and looking for late windows to get the ball inside.”

“It was just one of those games where it didn't look good early because of how they were shooting,” Virginia coach Tony Bennett said. “Our guys hung in there and usually our defense keeps us in there. Well, this time our offense had to keep us in there.”

While Virginia is known for not allowing many points, it also doesn't score a lot in averaging just 56 a game coming in. The Cavaliers posted a season high against Louisville, including 43 after the break.

Virginia: The Cavaliers’ defense initially succeeded in pushing Louisville out to the perimeter, but had their hands full accounting for several Cardinals who can shoot. They clamped down in the second half while its shooters began firing in the second half, especially Woldetensae. But they frequently put Louisville on the line.

Louisville: Nothing was going to come easy against Virginia, and that showed as the Cardinals couldn't stop Woldetensae from outside. But they didn't wilt despite missing shots, adjusting their strategy by drawing fouls that they converted. That cleared a big mental hurdle against the Cavaliers they initially tried not to focus on but was relieved to put behind them.

“I just give our guys credit for staying with it," coach Chris Mack said. "I don't think there is one way to beat Virginia. You just have to survive their identity.”

Virginia hosts Notre Dame on Tuesday night in the only regular season meeting between the schools.

Louisville visits Georgia Tech on Wednesday in pursuit of a season sweep and improve to 7-0 on the road in ACC play. The Cardinals won the previous meeting 68-64 on Jan. 22.