No. 5 Texas gets Beard first win, 92-48 over Houston Baptist 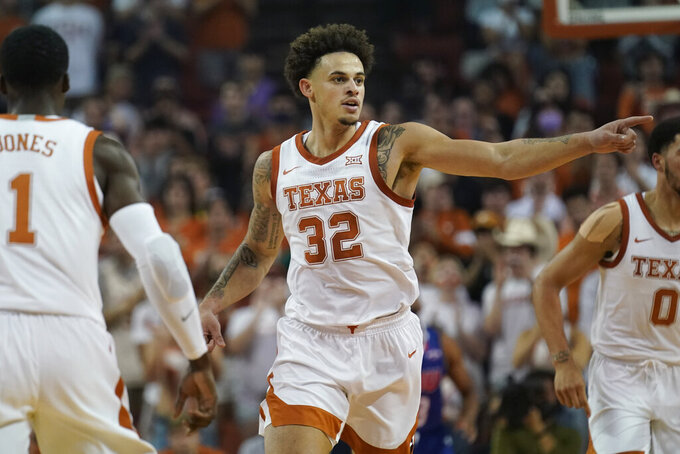 AUSTIN, Texas (AP) — Chris Beard is doing everything he can to pump new energy into Texas basketball.

He rebuilt the lineup with all-star transfer talent. He promised a campus party if the students packed their section in the stands for the season opener.

And after No. 5 Texas routed Houston Baptist 92-48 on Tuesday night behind 13 points from Tre Mitchell — with five others scoring in double figures — Beard invited the students onto the court for a team photo.

“Our guys were dialed in and played well tonight,” Beard said. “It was a great crowd. There was a buzz in our locker room. Special thank you to the students, they turned out.”

Beard came from Texas Tech, where he led the Red Raiders to the NCAA Tournament final in 2019. He took over for Shaka Smart, who didn't win an NCAA Tournament game in six seasons at Texas.

Beard quickly dove into the NCAA transfer portal for as much talent as he could find, and what he landed quickly built big expectations. Texas’ ranking to start the season is the program’s highest since the Longhorns were No. 3 to start the 2009-10 season.

And the transfers made the immediate impact that was expected.

“It was fun to play again ... Over time, I think we could grow into something special," Ramey said. “We have a lot of leaders on this team.”

Texas led 43-27 at halftime. Jones opened the second half with a 3-pointer, then had a steal for a fast-break layup. Consecutive 3-pointers from Ramey made it 54-29 and quickly turned the game into a blowout. Texas shot 64%.

Dispatching Houston Baptist is one thing. A much bigger test awaits: The Longhorns play Saturday at No. 1 Gonzaga, which lost to Baylor in last season’s NCAA Tournament final (and beat Dixie State by 34 on Tuesday night).

“I like our shooting this year. Shot selection this year is going to be a big part of our journey," Beard said. “I think our offense could be something special come February and March.”

“Texas is everything they are advertised ... deep, talented and athletic,” Houston Baptist coach Ron Cottrell said. “The days of rebuilding a program (slowly) are over. You can kiss that goodbye, It’s build a team every year. Chris has done a good job as anybody.”

One of Texas’ big transfers isn’t yet ready to play. Forward Dylan Disu from Vanderbilt led the Southeastern Conference in rebounding last season at 9.2 per game and averaged 15 points, but missed the last eight games of last season with a knee injury.

Jones is in his sixth season in the Texas program. He was diagnosed with leukemia in January 2018 and sat out the rest of that season, then played only two games of the 2018-2019 season. He was granted two medical redshirts, and because NCAA rule changes caused by the pandemic, he would still have another season of eligibility next year. He led Texas in scoring last season with 14.6 points per game. He'll turn 24 in December.

Houston Baptist: Cottrell is in his 31st year and will have to wait a few games to reach the 500-victory milestone. He’s still at 497.

Texas: Beard inviting the students to the court for the photo was just the latest in his efforts to engage fans who have been mostly indifferent for years. He's also scheduled a game later this month to be played in the old Gregory Gym, the small arena in the heart of campus where Texas used to play 50 years ago. That game will be for students only. Texas has sold nearly 9,000 season tickets, a program record.

Texas: At No. 1 Gonzaga on Saturday.