No. 6 Alabama holds off Mississippi State 64-59 to win SEC 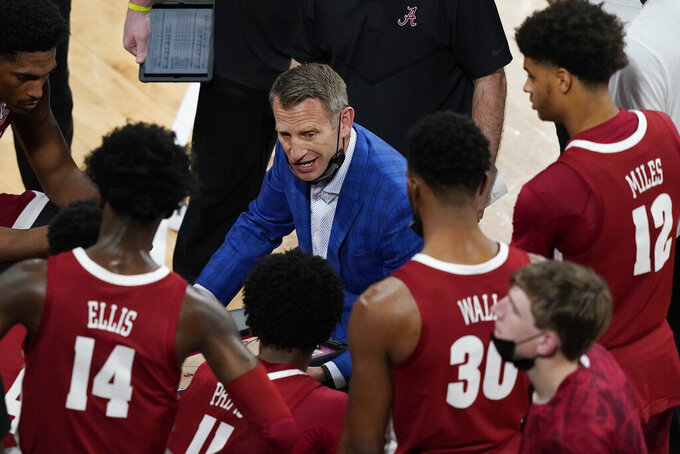 Alabama head coach Nate Oates speaks to his players during a time out during the first half of an NCAA college basketball game in Starkville, Miss., Saturday, Feb. 27, 2021. (AP Photo/Rogelio V. Solis) 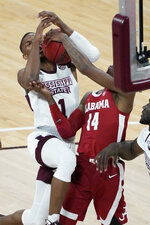 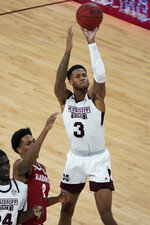 STARKVILLE, Miss. (AP) — For the first time in 45 years, Alabama is the Southeastern Conference champion in football and men's basketball.

Jaden Shackleford scored 10 of his 15 points in the second half, and No. 6 Alabama beat Mississippi State 64-59 on Saturday night to clinch its first SEC regular-season championship since 2002.

The men's basketball crown comes just two months after the powerhouse Crimson Tide football team claimed the conference title on the way to winning the national championship. It's the first time both programs won titles in the same academic year since 1975-76, and ending a 19-year drought in basketball was cause for celebration.

“I went in there and they dumped a bunch of water on me,” second-year Crimson Tide coach Nate Oats said of the joyous postgame locker room. “They were already celebrating before we got off the floor. They were fired up about it, they knew what was at stake. It’s big. It doesn’t happen very often.”

D.J. Stewart Jr. made four free throws for MSU in the final minute, but Alabama went 5 for 6 at the line down the stretch, including two successful attempts for John Petty Jr. with 11.9 seconds to go. Alabama held on despite shooting just 32%, including 25% from beyond the arc.

Jahvon Quinerly had 19 points for Alabama, including 15 before halftime that helped the Tide snap out of a cold shooting start. Herbert Jones grabbed 14 rebounds, helping Alabama to a 45-40 advantage on the glass.

Stewart scored 15 points for the Bulldogs, who had won their past two games. Deivon Smith had 12 points and 13 rebounds, and Molinar scored 11 points.

Quinerly's effort keyed a huge bench advantage for Alabama, which dominated Mississippi State 36-5. ... The Bulldogs made just 1 of 12 3-pointers and missed all six after halftime.

Alabama: Quinerly’s scoring provided a huge boost for the Crimson Tide, who started 3 of 16 from the field and were 1 of 10 during one first-half stretch. They went cold for a while in the second but came up with several key offensive rebounds to maintain possession and run down the clock before Rojas’ big 3.

Mississippi State: The Bulldogs had plenty of good looks in the first half that just didn’t fall. The second half began much better and they were able to get close, but couldn’t get that one key basket or stop Alabama on the glass. They also committed 16 turnovers for just 12 Alabama points, but those loomed large in a tight game.