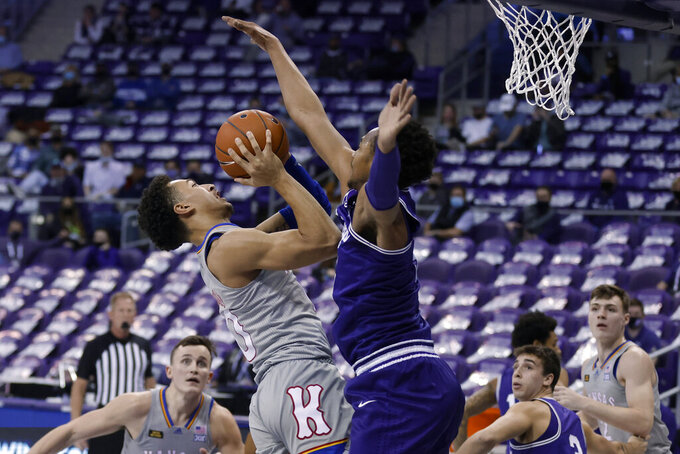 FORT WORTH, Texas (AP) — Not even Kansas coach Bill Self was going to look for something nitpick about the No. 6 Jayhawks after an impressive bounce-back game played without their senior starting point guard.

David McCormack had a season-high 20 points to lead five Kansas players in double figures, and the Jayhawks beat TCU 93-64 on Tuesday night to match their own Big 12 record by winning their 11th consecutive conference road game.

It came only three days after a 25-point home loss to Texas that matched the most lopsided win by an opponent in the 65-year history of Allen Fieldhouse.

“Not to be full strength and kind of have guys rally around that after the way we played Saturday,” Self said. “We did a lot of things that should give us confidence going forward.”

Marcus Garrett didn't play in the game close to his Dallas home, still dealing with symptoms after taking a elbow to the head while going for a rebound against Texas. Freshman DaJuan Harris Jr. made his first start at point guard, scoring seven points with seven assists and only one turnover in 27 minutes.

Ochai Agbaji, while dealing with a sore hamstring, added 19 points for the Jayhawks (9-2, 3-1 Big 12). Jalen Wilson scored 16, Tristan Enaruna had a career-high 12 and Christian Braun 10.

Chuck O’Bannon Jr. had a career-high 18 points to lead the Horned Frogs (9-3, 2-2), who had their five-game winning streak snapped. R.J. Nembhard had 14, below his Big 12-leading scoring average of 18.7 points and ending his streak of four 20-point games in a row.

TCU was within 28-24 after scoring seven consecutive points in 41 seconds, that spurt capped by Nembhard’s alley-oop pass to Kevin Samuel for a dunk after PJ Fuller’s steal. The Jayhawks called timeout, then responded with a 12-2 run that put them up by double digits the rest of the game.

“They punched us in the face early, and we certainly didn’t respond throughout. I didn’t see it coming,” TCU coach Jamie Dixon said. “I don’t know how it occurred and why we played like we did.”

Wilson started the KU spurt with a 3-pointer, and the freshman from nearby Denton also had a breakaway layup after getting a rebound on Mike Miles' 3-point attempt that didn't even make it to the rim. A strong inside move by the 6-foot-10 McCormack around TCU big man Samuel stretched the lead to 40-26 with just over five minutes left in the first half.

The Jayhawks still led by 14 at halftime before McCormack had five free throws, one as part of a three-point play, and Agbaji made a 3-pointer in a quick 10-2 run to start the second half.

“As I told the guys, I think the biggest message I gave them was like, ‘Hey, Kansas, I think they felt like us right now the other day.’ We need to respond like Kansas did,” Dixon said. “They came out and just took care of business and dominated in every area.”

TCU: A frustrating night for the Frogs, who were looking to build on the momentum of their winning streak. Miles was averaging 14.8 points per game, already with three 20-point games. The freshman point guard was scoreless while missing all eight of his shots, but had only one turnover in his 28 minutes.

Kansas is home Saturday against Oklahoma.