No. 6 Kentucky pulls away from Florida 66-57 in SEC finale 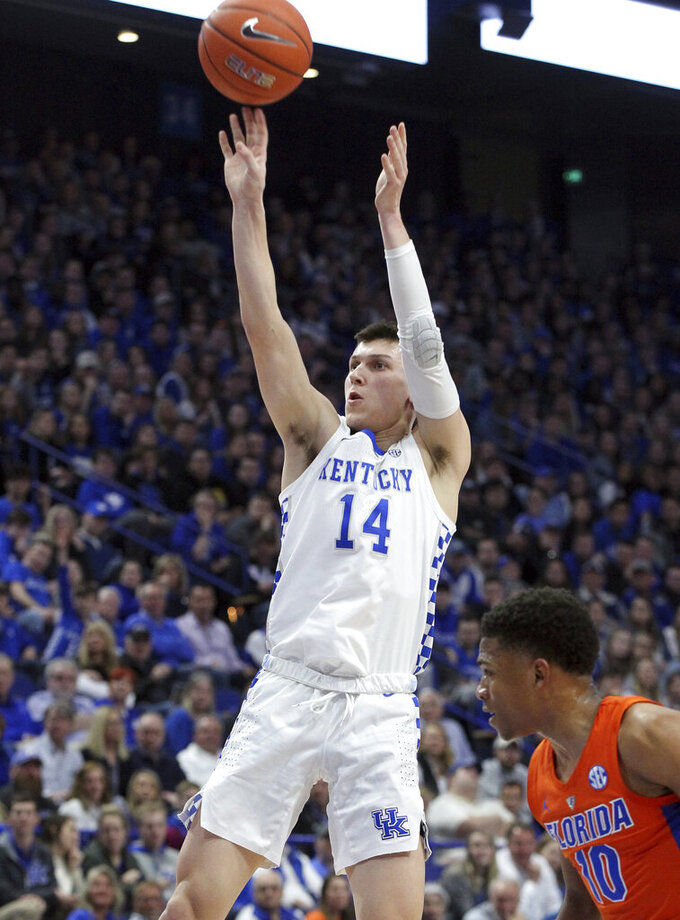 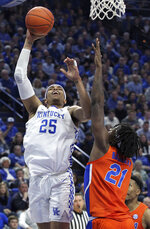 LEXINGTON, Ky. (AP) — Free throws seemed destined to be the saving grace for No. 6 Kentucky before it finally strung baskets together.

Tyler Herro made his share of both, and that combination was important in putting away Florida.

Herro scored 16 points and led a big second-half run that helped the Wildcats overcome the Gators 66-57 on Saturday.

Herro had six points during a 15-2 spree, hitting a couple of shots in the lane and adding two free throws, to give Kentucky a 54-42 advantage. The Wildcats capped the seven-minute burst by scoring 10 straight points.

"I saw some lanes going to the basket," said Herro, who made 6 of 11 from the field.

Herro hit all four free throws as Kentucky made 26 of 32 from the line. Florida finished 6 for 11 on free throws.

"Me and PJ (Washington) ran a little two-man game when they went man to man. We had to take whatever they gave us, but once they went man I felt like I had some lanes to drive," Herro said.

Added coach John Calipari, "Tyler made some unbelievable plays. We made some shots and again, we're a good free throw shooting team."

Washington added 15 points as Kentucky handed Florida its third consecutive loss. The Wildcats finished tied for second with Tennessee but clinched the No. 2 seed and a double bye for next week's SEC Tournament in Nashville.

Kevarrius Hayes had 19 points and Jalen Hudson 13 for Florida, which overcame a nine-point first half deficit to lead 31-30 at the break. A 5:12 drought in the second half did in the Gators, who also made just 3 of 18 from long range.

"We just really struggled from the 3 and didn't convert again at the foul line," Florida coach Mike White said.

Reid Travis missed his fifth consecutive game with a sprained right knee but was honored before his home finale with reserve guard Jonny David, who started and played the first couple of minutes.

Though Calipari wouldn't speculate about Travis' availability for the SEC Tournament, he didn't sound worried.

"Here's what good, it's not an ACL (anterior cruciate ligament)," the coach said. "He sprained his knee. He's going to be fine."

Kentucky took a step toward getting back in the Top 5 with the win that took more work than expected.

Florida: The Gators held their own for a while in the second of consecutive games against Top 10 schools but couldn't finish with a win. They committed just six turnovers, outscored Kentucky 32-22 in the paint and appeared to make the Wildcats play at their pace for a good stretch. They then went cold and weren't able to recover in shooting 44 percent.

Kentucky: The Wildcats got through the home stretch 4-1 without Travis. But it required a wakeup call they survived by getting hot midway through the second half. They shot just 41 percent, but those made shots were huge in clinching the game and second place.

"We knew we had to pick up the intensity and make a statement coming into the second half," Johnson said. "We need to get some separation."

Florida will play Arkansas on Thursday in the second round of the SEC Tournament in Nashville.

Kentucky plays the Mississippi-Alabama winner in Friday's quarterfinal at the SEC Tournament in Nashville.