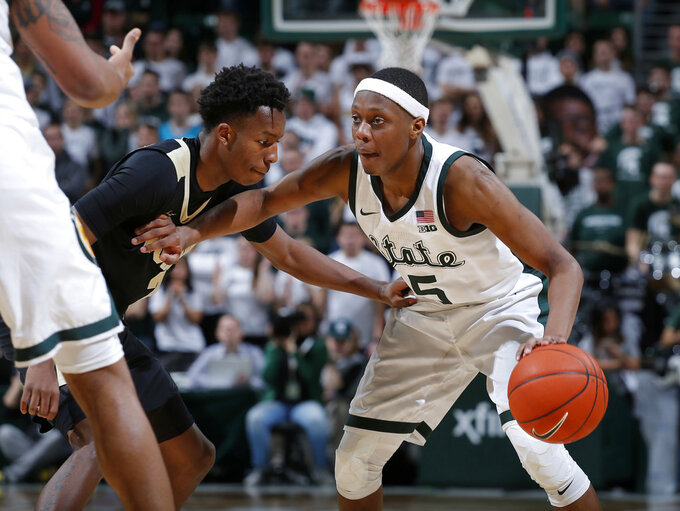 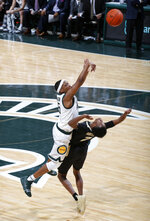 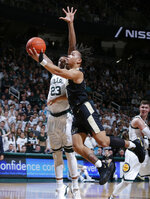 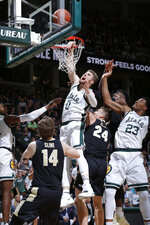 EAST LANSING, Mich. (AP) — Cassius Winston shook off a slow start and took over when No. 6 Michigan State needed him most against Purdue.

Winston began with a 16-plus-minute scoreless stretch but finished with 23 points, helping the Spartans pull away to beat the Boilermakers 77-59 on Tuesday night.

The Boilermakers (9-6, 2-2) had won their previous three games by a combined total of 55 points.

Purdue got off to a strong start, rattling Michigan State with pressure defense and taking an early 9-2 lead.

The Spartans cut down on their turnovers and held together as Winston, their leading scorer, made his first shot with 3:52 left in the first half. The junior point guard closed the half with nine points, putting Michigan State ahead 39-26.

Purdue's Carsen Edwards had a season-low 11 points on 3-of-16 shooting, including 2 of 13 from the 3-point line. Ryan Cline, the Boilermakers' second-leading scorer, had 12 points on 4-of-12 shooting.

Edwards entered the game averaging 25.5 points to rank among the nation's leading scorers.

"He's a very confident and talented player, but at times he doesn't let things come to him," coach Matt Painter said. "He has such high peaks sometimes he'll have a game like this because he wants it so bad that he starts pressing.

"Basketball means something to him, so he'll respond to this."

Edwards had five points in a 27-second span midway through the second half to pull Purdue within four points, matching his scoring from the first 28 minutes of the game.

Winston, though, scored three of the Spartans' next five points to push their lead to nine.

"He's crafty, breaking you down and scoring for himself and creating for his teammates," Painter said.

Purdue's Evan Boudreaux, a key player early in the game, was limited to 10 minutes in the first half and didn't play after halftime because of a groin injury after scoring five points, grabbing two rebounds and making a steal.

Purdue: Edwards had his worst game of the season, struggling to get his shot off against a defense geared to slow him down. When the junior guard did have an open look, he often missed.

"They're a good team, a good defensive team," he said. "They have good guys, but the shots didn't fall. I got the looks I usually get."

Michigan State: The Spartans are winning without one of their top players, junior guard Joshua Langford. He missed a third straight game with an ankle injury. The players filling in for him have made the most of the opportunity, including freshman Aaron Henry, who was a part of the defensive effort against Edwards.

Freshman Trevion Williams had season highs with 13 points and 12 rebounds for the Boilermakers off the bench.

"Our silver lining is him," Painter said. "He was the only guy I felt could get rebounds against Michigan State. In this league, you need guys like that. I'm excited about him."

"My heart goes out to the family and everyone in the Purdue family," Izzo said.

Purdue: At Wisconsin on Friday night.

Michigan State: At Penn State on Sunday, starting a stretch with four or five games on the road.