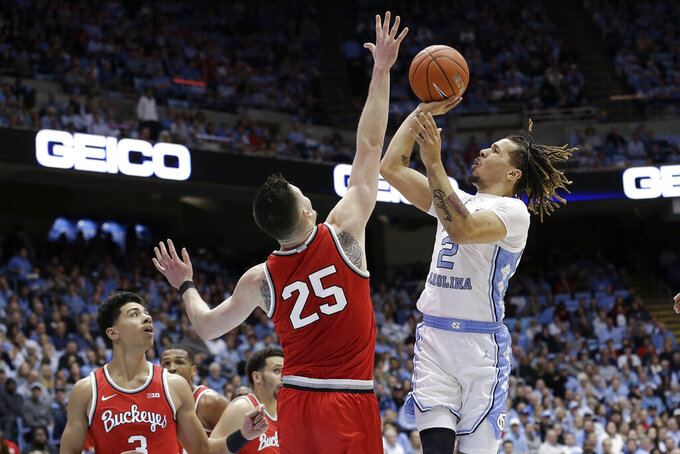 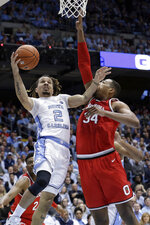 The result was a second attention-grabbing blowout by the Buckeyes against a ranked opponent, this one handing Hall of Fame coach Roy Williams his most lopsided home loss at UNC.

Duane Washington Jr. had 18 points and Ohio State shot 54% after halftime to beat North Carolina 74-49 in the ACC/Big Ten Challenge. It came roughly three weeks after the Buckeyes routed then-No. 10 Villanova by 25 points during an unbeaten start.

“I'll be interested to see how this plays out when we continue to play similar competition over a longer stretch," Buckeyes coach Chris Holtmann said. “I think that's the real test of your group and how committed you are on that end. But certainly we've had a good start with some teams for sure.”

E.J. Liddell added 12 points for the Buckeyes (8-0), who led just 29-27 at halftime. But Ohio State's offense got going while the defense continued making things difficult on the Tar Heels (6-2) just as in the first 20 minutes.

“It's been the same approach all year: attention to details, play really, really hard, be the more tougher team," Washington said. “We came out and had a chip on our shoulder as we always do and we fought, fought hard."

Ohio State outscored UNC 35-13 over the final 15 1/2 minutes to break the game open. The lead steadily grew until the Buckeyes had surpassed last January's 83-62 win by Louisville here that stood as the Tar Heels' worst in the Smith Center under Williams — who told reporters: “I have no answers, as evident from what you watched."

“I looked up in the stands and saw people leaving with 4, 5, 6 minutes to go in the game," Williams said, “and I didn't blame them."

Cole Anthony scored 15 points to lead the Tar Heels, though he had to leave briefly during the first half when he sustained a cut near his hairline while being fouled, leaving blood running down the center of his forehead. North Carolina shot just 27.4% and played much of the way without freshman big man Armando Bacot, who exited in the first half with a left ankle injury.

Ohio State: The Buckeyes have been dominant since a 64-56 win against Cincinnati to open the season. They had won their past six games by 19 or more points., and they arrived ranked second nationally in KenPom's adjusted defensive efficiency by allowing 84.6 points per 100 possessions. Overall, opponents had shot 32.9% on the season for the third-best defensive average in the country — and this performance will only help.

UNC: The Tar Heels are in the midst of a brutally tough stretch of the schedule. They lost to now-No. 4 Michigan in the Battle 4 Atlantis before holding off No. 13 Oregon in their best performance of the season for third place, then returned home for this top-10 matchup. Now they've scored fewer than 80 points in each of their first eight games for the first time since the 1949-50 season.

The Tar Heels were handed their second-worst loss in the Smith Center since moving here in January 1986, trailing only a 29-point defeat against Duke in 2002. It was also the lowest shooting percentage UNC had managed in the arena named for late Hall of Famer Dean Smith.

“It's a great history here," Liddell said. “It's a legendary court right there that we just played on.”

The 6-foot-10 Bacot was coming off a dominant performance against Oregon with 23 points, 12 rebounds and six blocks. But he crumpled to the court after a tip-in at the 12:48 mark, writhing in pain before being helped off by two teammates while putting no weight on his injured ankle.

“It was swollen by the time he got to the locker room," Williams said. “My guess is he'll be out a while.”

UNC: The Tar Heels visit No. 5 Virginia on Sunday. The defending national champions got blown out Wednesday night at Purdue.