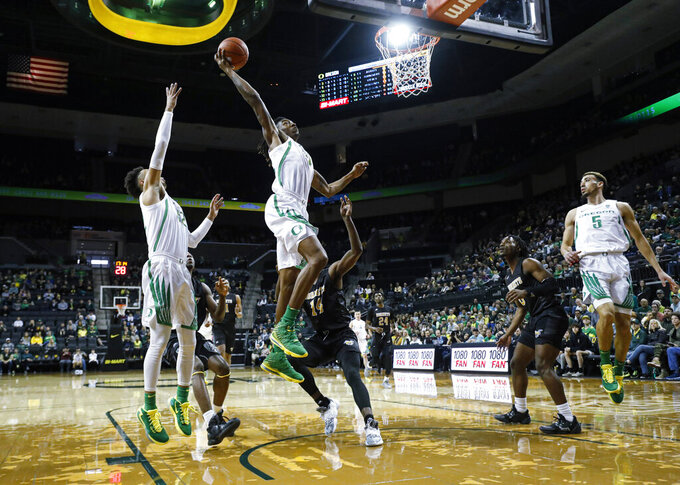 Chris Duarte scored a season-high 31 points and the Ducks pounded Alabama State 98-59 Sunday in their final tuneup before league play.

“We took a big step, a step in the right direction but going on the road for the conference opener ... we’re going to have to play a lot better,” Oregon coach Dana Altman said.

The Ducks (11-2) are the Pac-12 favorites and play Thursday at Colorado riding a five-game winning streak. They shot 59% and forced 20 turnovers leading to 32 points against the road-weary Hornets (1-12).

Duarte led four Oregon players with at least 10 points. Anthony Mathis had 15, Addison Patterson had 12 and Will Richardson added 10.

Brandon Battle had 14 points to lead Alabama State, which has played all 13 of its games away from home.

Duarte was 12 of 15 from the field, including making 6 of his 9 3-point attempts. He also had six assists as the Ducks recorded a season-high total of 28.

“I feel like I was more happy for him than he was,” Mathis said. “He’s been down on himself since he hasn’t been shooting well.”

“Chris got it going, that was good to see for him,” Altman added. “He’s making progress ... he’s got to work a lot harder in practice to get that consistency that all players want (but) he’s continuing to get better and better.”

The Ducks led 17-4 after eight minutes as the Hornets opened the game 1 of 11 from the field. When ASU did make its second field goal, on a steal and dunk by Toby Ewuosho, it resulted in a technical foul because Ewuosho was called for doing a chin-up on the rim. The subsequent free throw started a 9-0 spurt by the Ducks, who led 48-24 at halftime.

“The first half I really liked our energy defensively,” Altman said. “The second half we gave up too many easy ones."

Oregon shot 58% from the field in the opening 20 minutes and blocked five shots and also had seven steals.

The Ducks scored the first 11 points of the second half to go ahead 59-24, with the lead ballooning to 43.

“We had to get a lot better on defense and that’s what we focused on,” Mathis said. “We’ve still got a lot of stuff we’ve got to get better at. We’ve really got to sharpen up our tool box in practice."

Alabama State: The Hornets have played their first 13 games of the season away from home, including four against ranked opponents. After playing in 12 different states, the first home game will be Jan. 11, the 16th game of the season.

Oregon: The Pac-12 favorites should enter conference play ranked in the top 5. The Ducks haven’t been in the AP’s top 5 since March 6, 2017.

Graduate transfer Shakur Juiston, who started the first eight games of the season, missed his fifth consecutive game with a leg injury and there was no update on his return. Juiston is Oregon’s second-leading rebounder at 6.5 per game and is also averaging 8.8 points. Juiston hasn't returned to practice yet and Altman said "it’s hard to imagine him playing” this weekend.

Alabama State is on the road again for its opening game of the Southwestern Athletic Conference schedule Saturday at Jackson State.

Oregon will play only its second true road game when the Ducks open the Pac-12 conference schedule Thursday at Colorado. ___