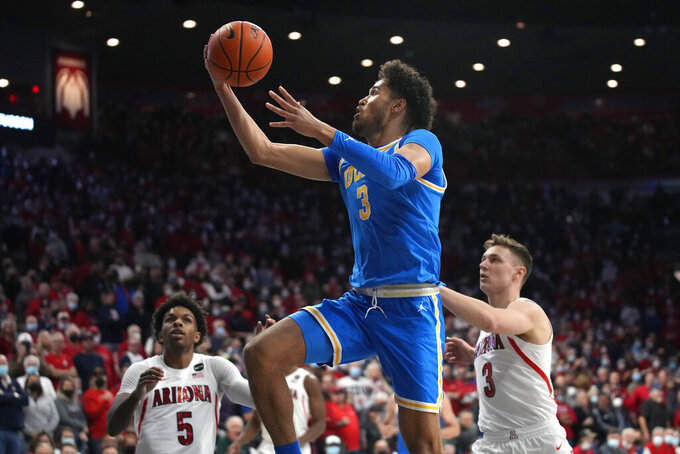 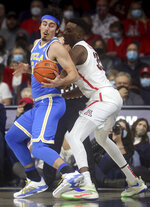 TUCSON, Ariz. (AP) — Arizona's offense, after flowing so well in the first half, hit a Bruins wall in the second. Good looks were hard to come by, every pass contested, the stretch without a field exceeding five minutes.

In stepped Kerr Kriisa. The Estonian guard who missed all 12 of his shots the first go-round against UCLA, calmly sank a 3-pointer with two minutes left, allowing the Wildcats space enough to pull out a hard-fought win.

Kriisa scored 16 points and hit that big 3-pointer, Dalen Terry flirted with a triple-double and No. 7 Arizona grinded out a 76-66 win over No. 3 UCLA on Thursday night.

“Playing at UCLA was good, gave him some battle scars, so to speak,” Arizona coach Tommy Lloyd said of Kriisa. “Now he's a little more grizzled, a little tougher, and that's super important.”

Shut down by UCLA nine days earlier, the Wildcats (18-2, 8-1 Pac-12) had a good offensive flow in the first half, building a 12-point lead that stretched to 17 in the second.

The Bruins (16-3, 8-2) turned up the defensive pressure and slowed the game in the second half to chip the lead down to three. Kriisa soon answered with a 3 — Arizona's only field goal in the final 7:04 — to make it 70-61 and the Wildcats made six straight free throws in the final 1:25 to win the rematch.

Kriisa threw the ball into the student section to celebrate the home win after being blown out in Southern California.

“Obviously, we were thinking about it,” said Terry, who finished with 10 points, nine rebounds and seven assists. "I'm glad we came out on top and we were able to do it at home.”

UCLA gave Arizona nearly everything it wanted offensively in the first half, then took most of it away in the second. The Bruins cut a 17-point deficit to three with just under four minutes left, but missed some key shots down the stretch.

“They had better energy, especially to start the game,” UCLA coach Mick Cronin said. “Defensively, we didn't get the job done and they got comfortable. You can't let them get comfortable offensively.”

UCLA won the first meeting 75-59 at Pauley Pavilion on Jan. 23 by slowing the pace and shutting down one of the nation’s top offenses.

Arizona got back to its free-flowing, fast-cutting ways against the Bruins early in the rematch. The Wildcats worked the hi-low for a couple of early baskets and hit consecutive 3s to cap a 12-0 run to go up 28-14 midway through the first half.

UCLA, after a good offensive start, struggled with Arizona's pressure and aggressive switching. The Bruins labored to get good looks and shot 1 of 9 from behind the 3-point arc.

“We got a lot of good looks,” Cronin said. “They just weren't falling.”

Bennedict Mathurin had the defensive highlight of the first half, rising up to block Bernard's dunk attempt in transition and bringing the crowd to its feet with him.

Scoring was a little more difficult for the Wildcats in the second half, yet they were able to push back the Bruins nearly every time they tried to make a run, keeping the lead near double digits.

UCLA's pressure finally started to wear down Arizona late in the second half. The Bruins held the Wildcats without a field goal for more than five minutes and used a 7-0 run to pull within 64-61.

Arizona wouldn't let them any closer, with Kriisa's 3 keying a strong finish.

UCLA couldn't slow the Wildcats in the first half, but was able to dictate the pace better in the second. It still wasn't enough.

Arizona was at its offensive best in the first half, then labored against UCLA's pressure but found a way to win. Beat No. 19 Southern California on Saturday and the Wildcats could find themselves back in the top 5 in Monday's poll.

UCLA had a hard time stopping Azoulas Tubelis early, particularly on hi-low plays. The Arizona big man had 10 points in the first half and four more in the opening 2 1/2 minutes of the second.

Then he sat. Going with a defensive lineup that included 7-footers Christian Koloko and Oumar Ballo, Lloyd opted to keep Tubelis on the bench over the final 10:01. He finished with 14 points and five rebounds.

“Sometimes you just get a feel for something and ride it out,” Lloyd said. “That defensive lineup is tough.”

Ballo and Koloko combined for five of their seven blocked shots in the second half.

Arizona: Hosts No. 19 USC on Saturday.