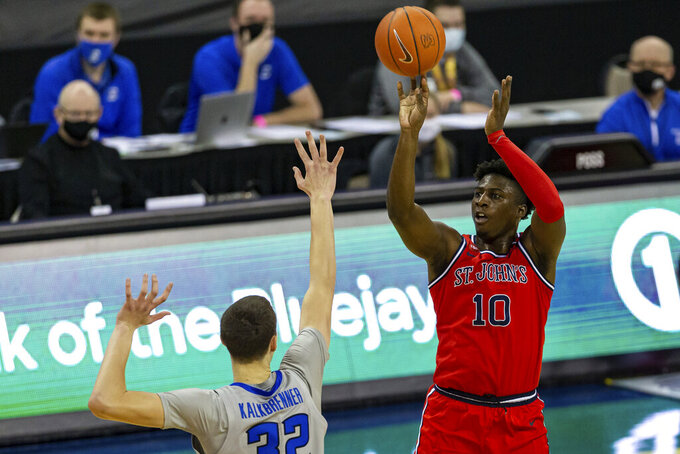 OMAHA, Neb. (AP) — Denzel Mahoney scored a season-high 24 points to lead six players in double figures with star Marcus Zegarowski out of the lineup, and seventh-ranked Creighton pulled away early in a 97-79 victory over St. John's on Saturday.

Zegarowski, the Big East preseason player of the year and the Bluejays' season scoring leader, was held out because of an undisclosed injury. Stadium reported the junior point guard tweaked his hamstring against Seton Hall on Wednesday.

Duke transfer Alex O'Connell came off the bench to score a season-high 16 points for the Bluejays. Mitch Ballock added 14 points, Damien Jefferson had 11 and Christian Bishop and Shereef Mitchell had 10 apiece.

The Bluejays led 56-39 at halftime, their most points in a first half as a Big East member and most against any Division I opponent in three seasons.

The bulge ballooned to 22 points in the middle of the second half before St. John's went on a 16-5 spurt to get within 11 in the last four minutes. Mahoney and Ballock hit back-to-back 3s as the Bluejays outscored the Red Storm 10-3 to end a game in which they had a season-high 16 3-pointers.

In the first half alone five players had at least three field goals, the Bluejays made 10 3-pointers and there were assists on 16 of 22 baskets. Creighton finished with assists on 24 of 37, with Jefferson, Ballock and Antwann Jones passing for four apiece.

St. John's: Outside of Champagnie, the Red Storm don't have the firepower to hang with Creighton. Their most lopsided losses of the season have come against the Bluejays.

Creighton: Coach Greg McDermott has built a team that can survive and even thrive without its best player. O'Connell, who hit three straight 3s in the first half as the Bluejays built their big lead, introduced himself to the Big East in a big way in his sixth game since becoming eligible.