No. 7 Houston takes AAC tourney with 91-54 win over Cincy 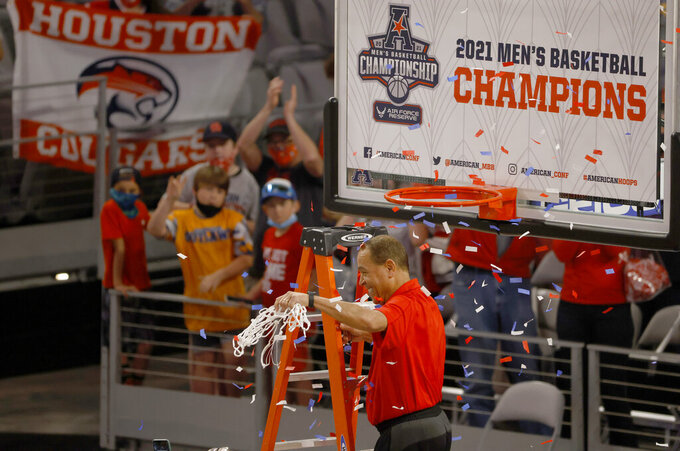 FORT WORTH, Texas (AP) — Kelvin Sampson and No. 7 Houston are going to their third consecutive NCAA Tournament, this time with an American Athletic Conference tournament title after finally getting past Cincinnati in the championship game.

The Cougars were already a lock for the 68-team NCAA field before AAC tourney MVP Quentin Grimes scored 21 points with five 3-pointers and Marcus Sasser had 16 points as they led the entire way in a 91-54 victory Sunday, after losing in each of the last two finals to the Bearcats.

“Our guys were excited about competing for a championship,” Sampson said. “Being the automatic qualifier was never something that we (wanted). We wanted to be the American Conference champions.”

Just more than an hour after the AAC title game ended, the Cougars (24-3) were named the No. 2 seed in the NCAA Midwest Regional. They will play their first-round game against Horizon League champion Cleveland State (19-7).

Houston went into the AAC tournament as the No. 2 seed because Wichita State, which played four fewer games, had a higher conference winning percentage during the regular season.

“At 14-3 this year, we felt like you could have called us regular-season champions,” Sampson said. “But (AAC officials) decided before the season started how they were going to do that.”

DeJon Jarreau, two days after a triple-double in the quarterfinal round, hit a 3-pointer for the first basket of the game to put Houston ahead to stay. He finished with 10 points.

Jeremiah Davenport had 11 points, all in the first half, and Mamoudou Diarra 10 for Cincinnati (12-11), whose NCAA Tournament steak is over after nine appearances in a row since they couldn't get the AAC automatic berth.

“Bottom line is, we’ll be back. We’ve got a really young nucleus. We won a championship (in 2019), played for a championship this year,” said John Brannen, 32-21 in his two seasons as Cincinnati's coach. “We’ve got a chance to be elite. That freshman and sophomore class is really, really good. ... Outside of today’s performance, over the course of most of the season, you saw that.”

Sasser had 14 of his points by halftime, when Houston led 41-27. Grimes then scored 10 points in a 12-0 run soon after the break, with the 6-foot-5 junior guard bookending the 2 1/2-minute spurt with a pair of 3-pointers, and in between making a jumper and a dunk.

The Bearcats won the previous two AAC title game matchups before last year’s tournaments were canceled because of COVID-19 after Houston had won its second consecutive AAC regular-season title.

This title game got lopsided, like their only regular-season matchup three weeks earlier, when Houston won 90-52 at home. SMU's 15-point win over Cincinnati in 2017 had been the largest margin in an AAC tournament final.

“We just ran into a buzzsaw,” Brannen said. “When they make shots like they did against us the last two games, they’re going to make a deep run in the NCAA Tournament when they play like that.”

Cincinnati was 9-4 in games played after returning from a 25-day pause because of COVID-19 following a road loss to Wichita State on Jan. 10. The Bearcats got to their fourth consecutive AAC tournament title game with a 60-59 win over the top-seeded Shockers in their semifinal game Saturday.

Cincinnati: The Bearcats shot a season-low 27.7% from the field (18 of 65) — their lowest previous was 30% (15 of 50), also against Houston. ... Senior guard Keith Williams, their leading scorer at 14.6 points per game, was back on the floor but had only eight points on 3-of-13 shooting in 24 minutes of action. He scored nine of Cincinnati’s opening 16 points in the semifinal win over Wichita State, but didn't play in the second half of that game because of an undisclosed injury.

Houston: The Cougars are going to their third consecutive NCAA Tournament. Before that, they had been to only three NCAAs the previous 20 years (2010, 1992, 1990).