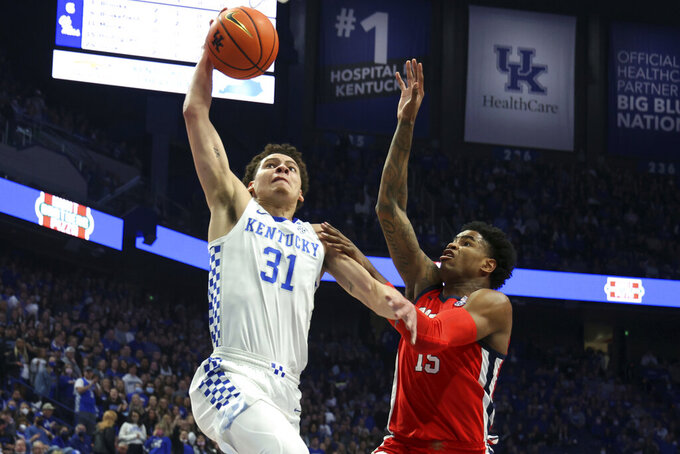 LEXINGTON, Ky. (AP) — Back at full strength offensively, No. 7 Kentucky showed how strong it could be.

Oscar Tshiebwe had 18 points and 15 rebounds, Sahvir Wheeler added 16 points and the Wildcats shot 60% before holding off Mississippi 83-72 in its home finale Tuesday night.

Kentucky (24-6, 13-4 Southeastern Conference) took control after four minutes behind hot shooting, hitting 9 of its first 12 attempts including 4 of 6 from long range and finishing 59% at halftime. The Wildcats spread the ball around, with five players scoring at least seven points in the first 20 minutes.

Tshiebwe jump-started Kentucky's 62% second-half shooting by scoring six points with a couple of dunks. The Wildcats eventually led 70-56 with 6:03 remaining before the Rebels rallied to within 76-70 on James White's jumper with 2:15 left.

But like much of the game, Kentucky got the points when it needed them.

TyTy Washington Jr. (14 points off the bench) followed with three free throws in 20 seconds before Tshiebwe's steal resulted in two more from the line by Keion Brooks Jr.' to make it 81-70. Tshiebwe's defensive rebound led to Brooks' jumper with 17 seconds left for a 13-point cushion as the Wildcats finished unbeaten at home.

And came away intact.

“I was just happy to see the ball go through the hole,” said Washington, who bounced back from 3-of-12 shooting in his return from injury at Arkansas to make 5 of 10 from the field. The freshman guard scored seven consecutive points during one first-half stretch.

“Just seeing the ball go in so many times in that time span helped confidence and felt like myself.”

“We got that thing back to about six but we couldn't keep Wheeler out of the paint," Ole Miss coach Kermit Davis said. “But I thought we ran good offense. Obviously, Matt was really good, I thought (Brooks) really fought it. ... Credit our guys. No moral victories, but hats off to Kentucky.”:

Tshiebwe, the national leader in rebounds per game coming in (15.3), helped Kentucky win the boards 30-24 and made 9 of 12 from the field for his 24th double-double this season. Wheeler was 6 of 9 shooting and had seven of Kentucky's 18 assists. Brooks finished with 10 points and five rebounds.

“I told the team it was nice to have everyone back,” said Wildcats coach John Calipari, who took issue with his team's defense.

“I thought Oscar got bullied and I got on him and held him accountable. He had 18 and 15, and I thought he got bullied. The guy was really leveraging him. (Nysier) Brooks is a good player. When Oscar caught the ball tight, he scored.”

Kentucky guards Davion Mintz and Kellan Grady, graduate transfers playing their sixth and fifth seasons respectively, both started and finished with eight and nine points separately while combining to make 3 of eight from long range.

Both were honored before tipoff to loud cheers at Rupp Arena. Mintz was the Wildcats’ scoring leader last season before becoming one of the SEC’s top sixth men this season. Grady entered the contest shooting an SEC-best 44% from behind the arc.

Murrell, a sophomore guard, posted his second-highest scoring output this season and second consecutive 20-point game. He has scored at least 14 points in five of the past six games.

Kentucky freshman forward Daimion Collins recorded the game's lone block in the second half, rejecting Jaemyn Brakefield after he made a steal. ... The Rebels outscored the Wildcats 16-9 in second-chance points but were edged 22-18 by Kentucky's reserves.

Ole Miss shot 50% from the field and mounted several small runs to get within single digits. The Rebels just couldn't stop Kentucky from stringing together enough baskets to maintain a safe cushion.

Kentucky finished unbeaten at Rupp Arena for the 14th time and sixth under John Calipari. More importantly, the Wildcats bounced back from a close loss at No. 14 Arkansas and stayed within sight of first-place Auburn.