No. 7 Michigan back on track after 87-63 rout of Maryland 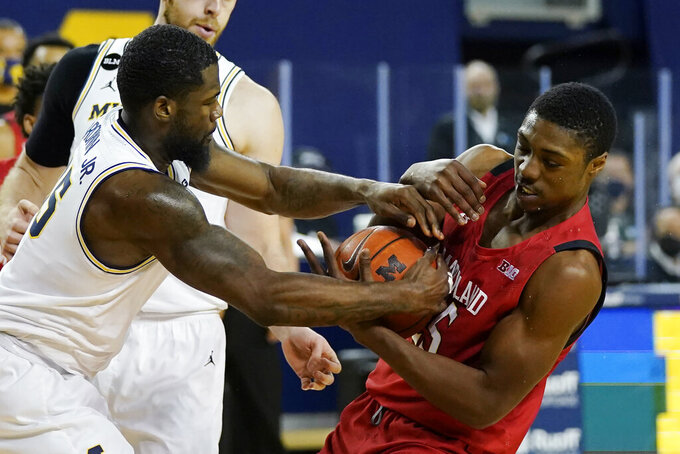 ANN ARBOR, Mich. (AP) — This was the first time No. 7 Michigan had to respond to a loss this season.

“When you have that type of positive mindset, looking for solutions, it didn’t surprise me how this team was ready to play today," Howard said.

Mike Smith made three early 3-pointers as Michigan raced to a 17-3 lead, and the Wolverines had little difficulty beating Maryland 87-63 on Tuesday night.

Michigan made its first five 3s — Isaiah Livers had the other two — in an opening flurry that put the Wolverines (12-1, 7-1 Big Ten) in immediate control. Michigan led 42-25 at halftime and stretched its advantage to as many as 25 points in the second.

“Playing our game and not letting anybody take us out of it,” Smith said. “Coach preached that, and we watched film, and we learned from our mistakes.”

The Wolverines were coming off a loss Saturday at Minnesota. Eli Brooks missed that game with a foot injury. He returned Tuesday and scored seven points.

Maryland (8-7, 2-6) was led by Donta Scott's 13 points, but the Terrapins couldn't keep up with Michigan's terrific outside shooting. The Wolverines went 12 of 24 from 3-point range and Maryland was 4 of 19.

Michigan swept the regular-season series. The Wolverines won at Maryland 84-73 on Dec. 31.

Maryland: The Terrapins have won only two Big Ten games, but they were both against ranked teams on the road. They've never beaten three Top 25 teams on the road in one season, and they didn't come particularly close against Michigan.

“Give them credit. They were dialed in and pressured us out of everything,” Turgeon said. “We weren’t tough enough to fight through that and take what the defense gives you.”

Michigan: The Wolverines made their loss to Minnesota look like just a bump in the road, putting Maryland in a big hole early and not letting up. This looked a lot like a number of other games Michigan has played lately. The Wolverines beat Minnesota by 25 and Wisconsin by 23 before losing the rematch with the Golden Gophers.

Maryland either led or was tied during the second half of six of its first seven conference games. But against Michigan, the Terrapins were never closer than the halftime deficit of 17.

Maryland's Darryl Morsell said the start of the second half might have been more disappointing than his team's shaky beginning to the first.

“The opening of the second half was probably more frustrating," said Morsell, who scored eight points. "I feel like we could have fought more and just gave a little more effort, regardless of the score.”

Freshman big man Hunter Dickinson had 26 points and 11 rebounds in last month's game against Maryland. He scored only three points Tuesday, but the Wolverines can win in many different ways.

“Hunter didn’t force it," Howard said. "Understood that when he saw the double team, made plays out of the double team. ... The unselfish play of this entire group is great to see.”

Michigan didn't drop at all after splitting last week's games against Wisconsin and Minnesota. The Wolverines justified that confidence from the voters Tuesday.

Maryland: The Terrapins play at No. 17 Minnesota on Saturday in another chance to beat a ranked team on the road.

Michigan: The Wolverines play at Purdue on Friday night.