No. 8 Alabama looks to move a step closer to SEC title 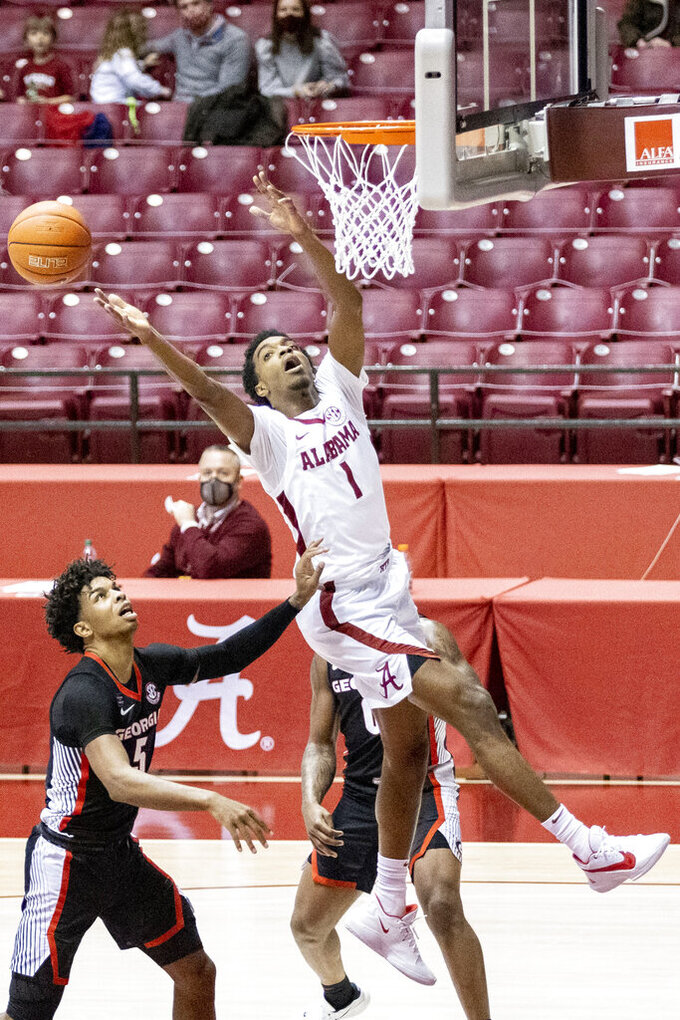 Alabama forward/guard Herbert Jones (1) chases a rebound over Georgia guard Justin Kier (5) during the second half of an NCAA college basketball game on Saturday, Feb. 13, 2021, in Tuscaloosa, Ala. (AP Photo/Vasha Hunt) 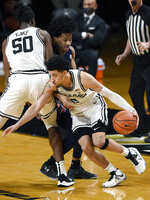 COLUMBIA, S.C. (AP) — A look at the weekend action around the Southeastern Conference:

No. 8 Alabama (17-5, 12-1) hosts struggling Vanderbilt (6-10, 2-8) as the Crimson Tide hope to get a step closer to their first SEC regular-season title in nearly two decades. Alabama had its game Thursday at Texas A&M postponed due to the coronavirus. It's got a three-game lead in the SEC standings over No. 24 Arkansas and the opportunities for any of the chasers (No. 19 Tennessee, like the Razorbacks, has four losses) to make up ground is running out before the SEC Tournament's scheduled start in Nashville, Tennessee, on March 10. The league built in a cushion to make up postponed games on the weekend of March 6-7. Alabama has shaken off most distractions this season to rise to the top of the SEC, something it hasn't done in the regular season since 2002. John Petty Jr. led the way with 13.4 points a game. He's also second in SEC 3-point shooting at 39.6 percent. The Commodores have lost nine of their last 11 games, a stretch that's also included three postponements. Vanderbilt features Scotty Pippen Jr., who is second in the SEC at 20.3 points a game.

Javonte Smart, G, F, LSU: He flourished this past week, scoring 22 points against Missouri and 20 points against No. 19 Tennessee as the Tigers won both games to bounce back from losing two in a row. Smart was named the SEC player of the week for his performance. The junior has averaged 15.1 points a game this season and ranks fourth in the SEC at 4.5 assists a game. The victory over the Vols was the third straight for LSU, with Smart scoring 20 or more each time.

No. 24 Arkansas is the hottest team in the SEC with seven straight league wins. Justin Smith is a big reason why: The Razorbacks are 16-1 when he's in the lineup and 1-3 when he's not. ... Georgia's upset of No. 20 Missouri was due to a hot-shooting performance in which the Bulldogs shot 49% from the field and 47% (7 of 15) on 3-pointers. ... With Wednesday's win over South Carolina, Tennessee coach Rick Barnes moved into a tie with DePaul's Ray Meyer for 18th overall in Division I coaching victories at 724. ... The Vols were on fire shooting against South Carolina, hitting on 54.2% of their attempts. They made 9 of 19 3-pointers.

No. 17 Kentucky plays at No. 2 South Carolina, with the Gamecocks looking to bounce back from their first SEC loss of the past two seasons. No. 21 Tennessee stopped South Carolina's 31-game win streak over league opponents on Thursday night. That run included three straight over the Wildcats (15-5, 8-4). Kentucky has maintained its spot in the Top 25 despite some up and down play the past month. The Wildcats lost by double digits to Tennessee and Ole Miss, yet topped the Lady Vols 71-56 in the rematch earlier this month. The game features some of the league's best players in Kentucky forward Rhyne Howard, who's averaging 19.7 points, and South Carolina's high-powered duo of Zia Cooke and Aliyah Boston. Cooke leads the team at 15.7 points a game, while the 6-foot-5 Boston is averaging a double-double with 13.6 points and 11.6 rebounds.