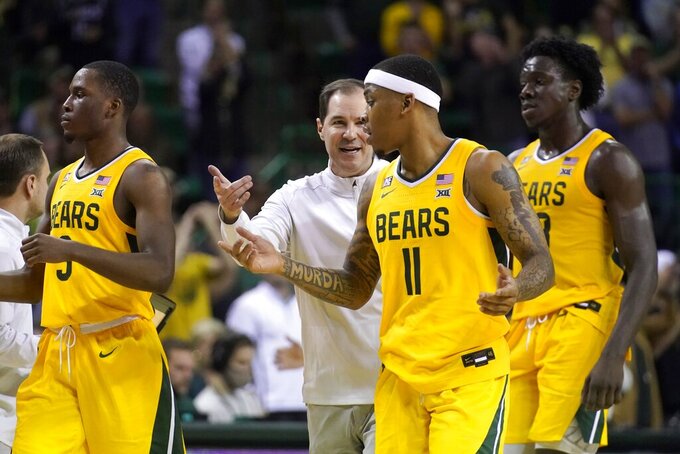 Baylor head coach Scott Drew, center left, talks with guard James Akinjo (11) as they walk off the court during a timeout in the second half of an NCAA college basketball game against West Virginia in Waco, Texas, Monday, Jan. 31, 2022. (AP Photo/Tony Gutierrez)

Yet the last few weeks have not been smooth sailing for the eighth-ranked Bears and No. 10 Jayhawks. Baylor dumped back-to-back games to Texas Tech and bottom-dwelling Oklahoma State as the nation's No. 1 team, then it lost to Alabama in the Big-12 SEC Challenge. Kansas lost an early game to the Red Raiders and then got pummeled by Kentucky.

It doesn't help that the Jayhawks, who bounced back to beat Iowa State this week, have been missing Big 12 scoring leader Ochai Agbaji to COVID-19 protocols and talented Arizona State transfer Remy Martin to a lingering back injury.

“We’ve talked to ‘Och’ quite a bit,” Self said. “He is actually feeling well. He did have some symptoms right off the bat. He's following the same COVID protocol every athlete in the Big 12 is following. He’s not getting anything special."

The Bears also head into Saturday's trip to Lawrence off a confidence-building win over West Virginia.

“This league is one of those leagues you don’t want to be on a losing streak, because nobody feels sorry for you,” Baylor coach Scott Drew said. “You can pick any sport. You lose, you make errors, you lose a little confidence. And you want to get back to winning as quick as you can."

The other matchup of ranked Big 12 teams Saturday pits the No. 20 Cyclones against No. 23 Texas in Austin, while the No. 14 Red Raiders head to West Virginia having won four of their past five games.

TCU is knocking on the door of the Top 25 after consecutive wins over then-No. 19 LSU and Oklahoma and faces Kansas State on Saturday. And the first edition of this year's Bedlam matchups sends Oklahoma, loser of six of its past seven, to Oklahoma State, which has dropped four consecutive games.

Well-traveled Texas guard Marcus Carr scored 18 points in a 77-64 loss to No. 14 Texas Tech, a nice bounce-back game after he was held to three points in 35 minutes in a 52-51 win over No. 18 Tennessee. The former Pittsburgh guard, via two years at Minnesota, is averaging 11 points so far this season.

After the Big 12-SEC Challenge, the league is the only one in the nation in which every team has a win over a ranked opponent. ... The average scoring margin in the Big 12 is 9.1 points, the smallest among league peers. ... The Big 12 leads the nation in scoring defense at 62.8 points a game. ... Iowa State's Izaiah Brockington was the Big 12 player of the week after scoring 24 points against Kansas, while Texas Tech's Bryson Williams was the newcomer of the week. ... Kansas is 53-6 in its last 59 games following a loss, dating to the 2012-13 season. ... Six of Kansas State's nine Big 12 games have been decided by one possession. ... Oklahoma State's Isaac Likekele has had a rebound in 114 straight games, dating to his freshman year, and he has at least one assist in 55 straight. ... TCU's 72-63 win over the Sooners was its first in Norman and allowed the Horned Frogs to sweep Oklahoma this season.

The game of the week occurs Friday night when No. 13 Texas heads to ninth-ranked Baylor. On Saturday, West Virginia visits No. 18 Oklahoma, Oklahoma State heads to No. 11 Iowa State and Texas Tech visits No. 25 Kansas State. ... Baylor's Jordan Lewis was the Big 12 player of the week after a triple-double against West Virginia. Oklahoma's Kelbie Washington was the freshman of the week. ... The Cyclones are 19-3 for its best start through 22 games in two decades. ... The Jayhawks beat Oklahoma State on the road for the first time since Jan. 29, 2012. ... Oklahoma's Liz Scott had the winner in the final six seconds of consecutive games against top-10 teams Texas and Baylor. ... TCU's Lauren Heard is now the Division I active leader in career free throws with 575. ... West Virginia's Kari Niblack surpassed 1,000 points for her career last week.