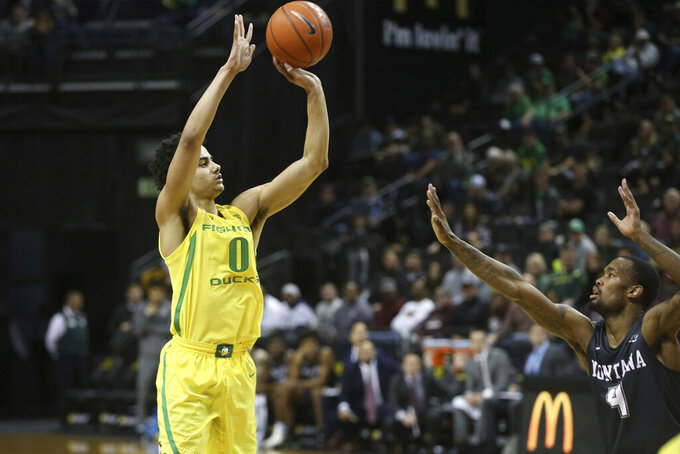 Oregon's Will Richardson shoots over Montana's Sayeed Pridgett during the second half of an NCAA college basketball game in Eugene, Ore., Wednesday, Dec. 18, 2019. (AP Photo/Chris Pietsch) 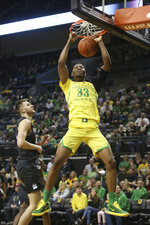 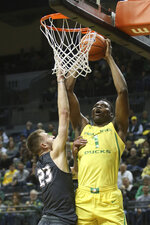 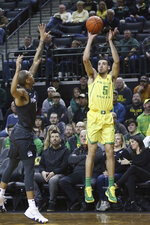 The eighth-ranked Ducks made a significant addition to their lineup Wednesday night as 6-foot-11 N’Faly Dante played his first college game and scored 11 points during an 81-48 win over Montana.

“He’s just a dominant big,” said Oregon sophomore Will Richardson, who played against Dante in high school. “Any time he steps on the court, even if he’s not scoring a lot, he’s going to make his presence felt.”

The much-anticipated debut of Oregon’s top freshman recruit probably wasn’t needed against the Grizzlies (4-6), but the Ducks want Dante comfortable with his role before Pac-12 play begins in two weeks. Oregon (9-2) has two more nonconference games.

“I didn’t know what to think,” Ducks coach Dana Altman said. “He’s practiced OK other than his conditioning. ... I thought he could come out and give us a few minutes.

“You can see his natural talent and I think as he gets in shape and (learns) more of our sets,” his contributions will increase.

Francis Okoro, a 6-9 sophomore who had been Oregon’s tallest player, posted the second double-double of his career with 12 points and 17 rebounds, the latter a career high while he matched his career best for scoring. Richardson and Payton Pritchard led the Ducks with 14 points each, and Pritchard added seven assists.

Okoro and Dante were never on the court together Wednesday, but Altman envisions that possibility.

“It’s going to help Francis a lot,” Richardson said. “They work well together.

Dante would have been a high school senior this year but the native of Mali reclassified over the summer to go to college. He wasn’t cleared for eligibility in time to enroll for the fall term but when that ended last Friday, he officially became a student for winter term, though classes don’t begin until Jan. 6.

Dante didn’t play Saturday in Oregon’s road win at No. 5 Michigan because he hadn’t practiced with the Ducks, but after a couple of days of workouts he was in uniform Wednesday.

He immediately made an impact.

The Ducks scored 11 consecutive points to break away from the last tie at 12-all. That spurt included the first two Oregon points for Dante, who entered the game with 7:50 left in the first half and promptly scored seven points in three minutes.

Dante converted a pair of lob passes for dunks, the second one when he was fouled and hit the free throw for a three-point play. He finished the first half with nine points, equaling Okoro’s total as the Ducks dominated inside. The two big men combined to go 8 of 9 from the field as the Ducks shot 52% to lead 37-24 at halftime.

Oregon gradually expanded the lead in the second half and ended up shooting 54% from the floor.

“I like what we’re doing,” Altman said. “We’ve just got to keep taking steps in the right direction.”

Montana could never find its groove on offense, shooting 37% while committing 20 turnovers. Kendal Manuel led the Grizzlies with 15 points.

Oregon: The Ducks have won their five home games, each by at least 12 points.

The senior point guard became the 14th Oregon player to reach 1,500 career points. Pritchard made two 3-pointers to raise his total to 224, passing Terik Brown for fourth on that school list.

Okoro’s 17 rebounds were the most by a Ducks player since Chris Bouchard had 19 three years ago, also against Montana. That led to Oregon’s 40-24 advantage in rebounds. The Ducks had a 12-0 advantage over Montana in second-chance points.

Montana plays at Omaha on Saturday, the final game for the Grizzlies before opening their Big Sky schedule Dec. 28 at home against Northern Arizona.