No. 8 Providence rallies from 19 down, beats Butler in OT 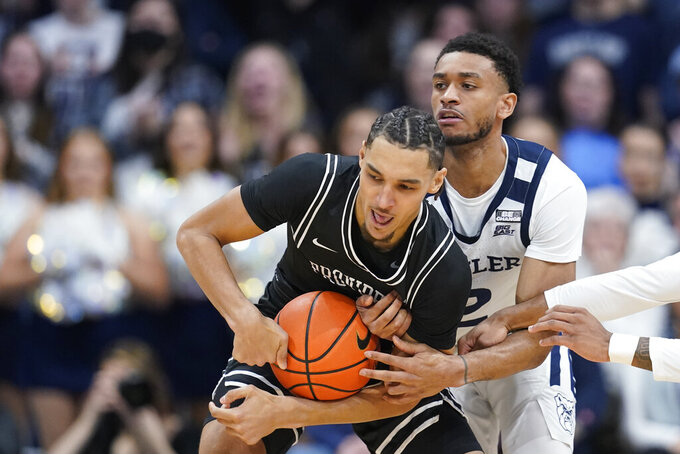 Providence's Brycen Goodine (12) is defended by Butler's Aaron Thompson (2) during the first half of an NCAA college basketball game, Sunday, Feb. 20, 2022, in Indianapolis. (AP Photo/Darron Cummings)

INDIANAPOLIS (AP) — Ed Cooley found himself settling in and settling down as No. 8 Providence steadily cut into Butler’s lead Sunday.

The Providence coach believed his tested, talented roster would eventually respond to the challenge of erasing a 19-point, second-half deficit. He wasn't disappointed.

Jared Bynum made two free throws with 38 seconds left in overtime and No. 8 Providence got the defensive stop it needed to rally for a crucial 71-70 victory.

“We like playing in close games,” Cooley said. “It's not luck. When it's close, that's when I’m the most comfortable."

Apparently, so is his team.

Over the final 22 minutes, the Friars (22-3, 12-2 Big East) led for exactly 102 seconds. Before that, they hadn't led since it was 4-2. Yet, somehow after after opening the game 4 of 24 from the field, the Friars still managed to come up with a winning combination.

Nate Watson scored 22 points, including the putback that finally gave Providence a 69-68 lead with 2:08 left in overtime. Noah Horchler had 15 points, 11 rebounds and delivered the long two-pointer that finally tied the score at 64 with 23.5 seconds left in regulation as well as the rebound to seal it.

The Friars trailed by a point before Bynum made his two foul shots to finish with 18 points. He delivered the defensive plays, too.

“I was never worried," Watson said. “We've been in a lot of games like this and I have trust in our coach and faith in my teammates to execute at the end."

The Bulldogs never trailed over the final 36 minutes of regulation, still led by seven with 2 1/2 minutes to play and had a chance to win at the end of regulation and overtime. But Thompson's layup was blocked at the rim to force the extra session and Jayden Taylor missed an open 3-pointer at the end of overtime.

“That’s tough one to swallow, obviously," Butler coach LaVall Jordan said. “We couldn’t get the stop when we needed. It came down to the last possession, we got a good look at it but it didn't drop."

Providence trailed cut 43-24 less than three minutes into the second before steadily climbing back. It cut the deficit to 52-43 with 8:53 left and closed to 56-54 on Watson's dunk with 4:20 remaining. When the Bulldogs answered with five straight points, the Friars had one more flurry.

They tied it at 64 on Horchler's basket and did just enough to hang on late.

Providence: A week ago, the Friars looked like they might coast to their first Big East regular-season crown. Sunday's victory should keep them in the hunt, even with a trip to No. 10 Villanova still looming following Tuesday's home loss to the Wildcats. But a loss at Butler would have seriously hurt their chances.

Butler: The Bulldogs nearly got back to .500 for the first time since mid-January with what would have been a second straight win over a ranked foe. Instead, with three regular season games and the Big East Tournament still remaining, Butler needs to do some major work — just to make a postseason tournament.

On Monday, the Friars earned their highest ranking in more than six years. It still could be a short stint in the top 10. But surviving this one should take some of the sting out of Tuesday's loss.

Providence played without injured starting guard Al Durham, a sixth-year senior who is their second-leading scorer and one of the nation's top free-throw shooters. The announcers on the television broadcast said e was out with a sports hernia and Cooley said it's unclear when Durham could return.

“He's been in pain for the last month and we thought right now it would be the right thing to do to keep him out," Cooley said. “We were disheveled without him."