No. 9 Duke aims to send Coach K out with 1 final title run 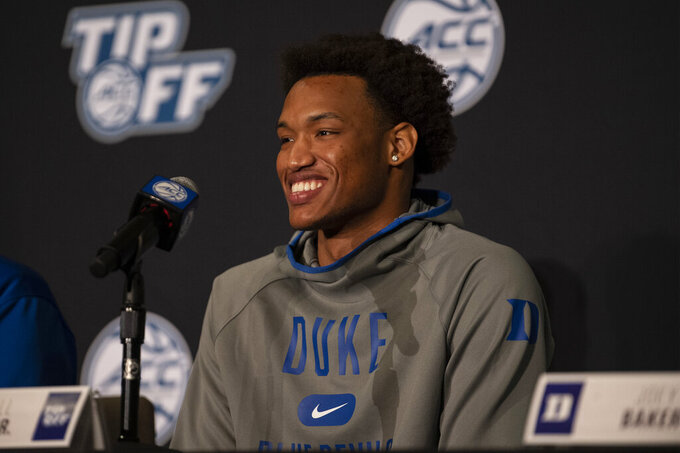 DURHAM, N.C. (AP) — Mike Krzyzewski knows all the attention and hype that will follow what amounts to his farewell tour with ninth-ranked Duke.

He’s also determined to focus on how to get his Blue Devils to win another Atlantic Coast Conference championship or return to the Final Four than his upcoming retirement, which will end a Hall of Fame career unlike any other.

“I’ve told my staff and everyone around me not to use the word ‘last,’” said Krzyzewski, who has a Division I-record 1,170 career wins with five NCAA titles. “This is my 47th year, my 42nd year at Duke. I’m going after it the way I’ve gone after it every year.”

The 74-year-old Krzyzewski announced in June he would retire after this season, with former Blue Devils player and associate head coach Jon Scheyer taking over as his successor.

The Blue Devils (13-11, 9-9) are coming off an uncharacteristically struggle-filled season amid the COVID-19 pandemic. They return just four players who saw significant minutes for a young team that missed the NCAA Tournament for the first time since 1995.

But the Blue Devils have restocked with another touted recruiting class and are again the ACC favorite, led by preseason league player and freshman of the year Paolo Banchero.

“He doesn’t want it to be about him. … But there’s no question every one of us as coaches, every one of us in that locker room, wants to send him off on an incredibly special season.”

Some other things to know about the Blue Devils for the 2021-22 season:

The 6-foot-10, 250-pound Banchero is the headliner as a potential No. 1 overall NBA draft pick with perimeter and ballhandling skills. The Blue Devils have also added two other five-star prospects in guard Trevor Keels and small forward A.J. Griffin, and a four-star point guard in Jaylen Blakes.

Griffin is recovering from a knee sprain and he missed all last season with an ankle injury, so there's an longer-term rust factor for him to overcome.

Seven-foot sophomore Mark Williams was terrific down the stretch last season. If he continues that to start this season, the Blue Devils will have an imposing presence in the paint.

Williams averaged 16.7 points and 7.8 rebounds over the final six games, including a dominating performance (23 points, 19 rebounds) i n the ACC Tournament second-round win against Louisville.

Moore had some difficult stretches last season, namely when he went 1 for 21 from the field over four early games. But he was a fixture in the starting lineup over the final six weeks, and has the ability to create off the dribble. Baker is a career 36.3% 3-point shooter who can help stretch defenses, while Roach averaged 8.7 points as a freshman.

“Most people may call it pressure,” Moore said of being a captain alongside Baker on Krzyzewski’s final team. “But I don’t think there’s pressure at all. Obviously (we’re) having the opportunity to do what we love to do.”

The Blue Devils open against No. 10 Kentucky in the Champions Classic in New York on Nov. 9, then host Army three days later to mark the return of the famously rowdy “Cameron Crazies” to Cameron Indoor Stadium after Duke played in an empty home arena last year.

Duke opens ACC play at home against Virginia Tech on Dec. 22 and closes, fittingly, with a home game against 19th-ranked rival North Carolina on March 5 for Krzyzewski's home finale.