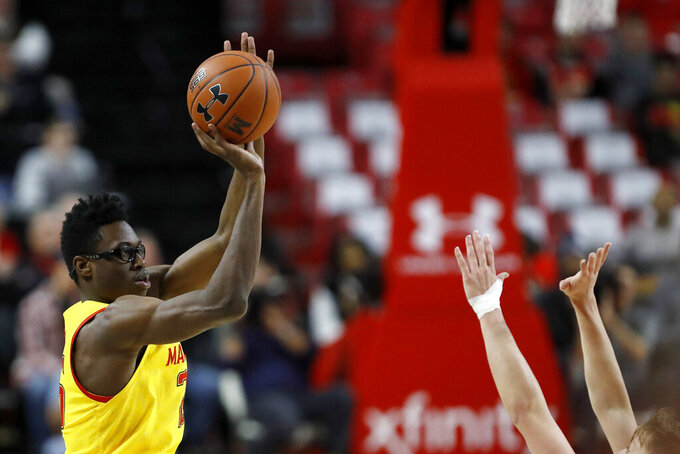 In a lackluster performance hardly befitting the first-place team in the Big Ten, the ninth-ranked Terrapins blew most of a 14-point lead against lowly Nebraska before escaping with a 72-70 victory Tuesday night.

“We didn't respect our opponent enough. I'll take the blame for that," Turgeon said. “We'll learn from it."

A blocked shot in the closing seconds by Jalen Smith proved to be the difference-maker for Maryland (20-4, 10-3) against a team that has now dropped nine in a row and stands 2-11 in the conference.

“If you're going to have a flat game, have it at home against a team that's won two and figure out how to win it," Turgeon said. “We got lucky. This one almost slipped away."

Turgeon became the fifth coach in school history to reach the 200-victory plateau. He''s 200-96 since taking over for Hall of Fame coach Gary Williams before the 2011-12 season.

The way Maryland played, he's fortunate he didn't get saddled with loss No. 97.

“We just were out of it," he said. “We got beat off the dribble. Close-outs weren't great, transition wasn't great, rebounding wasn't great. It was just one of those deals."

Though the enthusiasm was lacking, there was no shortage of stars for the Terrapins in their seventh straight victory. Smith had 16 points and 13 rebounds, Eric Ayala scored 16, Donta Scott had 10 points and 10 rebounds, and Anthony Cowan Jr. totaled 13 points and 10 assists.

It was the first time since 2001 that three Terps registered double-doubles in the same game. It was the seventh straight for Smith, and Maryland needed him on both ends to improve to 14-0 at home.

“I'm really proud of our team for how we responded to adversity. There was a lot of positivity at halftime even through we were down 13 points," coach Fred Hoiberg said.

Maryland led 56-54 before Ayala sandwiched a pair of 3-pointers around a layup by Smith for a 10-point cushion with 4:47 to go.

Nebraska wasn't done. Two free throws by Cam Mack cut it to 71-70 with 12 seconds left before Cowan missed the front end of a 1-and-1.

Mack then drove the lane but had his shot swatted away by the 6-foot-10 Smith, who was subsequently fouled in the chase for the loose ball with less than a second remaining. Smith made the first shot and intentionally clanged the second off the rim.

“I just saw him driving to the lane. I was in the corner," Smith said. “Once he went up, I tried to go up with him and time it right. And I got it."

Smith had 10 rebounds and nine points in the first half, and Maryland led 38-25 at the break after limiting the Cornhuskers to 27% shooting.

Cowan capped the surge with three foul shots. He went 9 for 11 at the line before halftime.

Nebraska: The Cornhuskers have two seniors and just one win in 2020. No one said rebuilding in the competitive Big Ten was going to be easy, but sometimes a moral victory can feel pretty good.

“Like I told them in the locker room, we just went toe-to-toe with the No. 9 team in the country," Hoiberg said. “So a lot of positive tonight for our team."

Maryland: The Terrapins did what was necessary to keep their winning streak intact. Yeah, they started slowly against the struggling Cornhuskers, but that's to be expected following an emotional comeback win at Illinois.

Mack was 1 for 10 from the floor, but the junior college transfer had eight assists to move past Tyronn Lue into fifth place on the school single-season list. Mack increased his assist total to 156. Lue had 152 as a senior in 1997-98 prior to an 11-year NBA career.

Nebraska hosts Wisconsin on Saturday, the rematch of a Jan. 21 game won the Badgers, 82-68.

Maryland faces Michigan State on the road Saturday, the first of two games between the teams over a two-week span.