No. 9 Maryland tops No. 25 Michigan for Big Ten title share 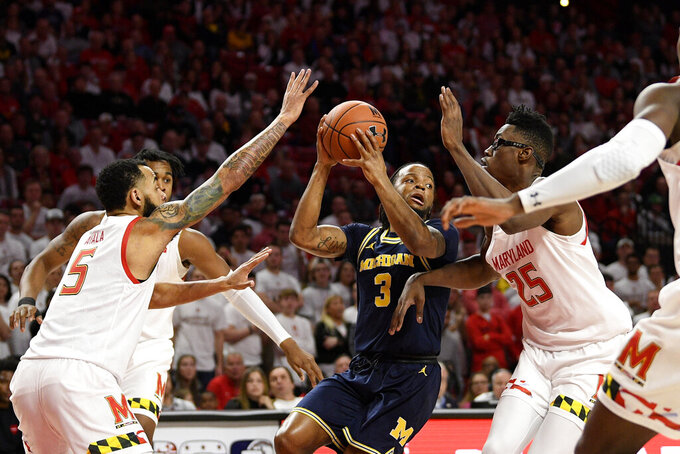 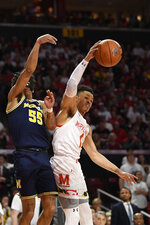 COLLEGE PARK, Md. (AP) — Each member of the Maryland basketball team took turns gripping the trophy awarded to the Big Ten Conference champions. They wore bright red hats boasting their accomplishment, and they proudly cut down the nets on each side of the court.

It really didn't matter to coach Mark Turgeon or the No. 9 Terrapins that their 83-70 victory over 25th-ranked Michigan on Sunday was good for only a share of the regular-season title. After more than four months' worth of exhilarating wins and bitterly disappointing defeats, the robust celebration — which served as a welcome release of emotion — came without apology.

“Would we have liked to have won it outright? Absolutely, but we're still champs," Turgeon declared.

Maryland moved into a first-place tie with Wisconsin, and Michigan State joined the fray at the top by defeating Ohio State later Sunday. If two or more teams tie atop the standings at the end of the season, it is a shared championship.

And that was good enough for Maryland, which received its first Big Ten championship trophy since joining the league in 2014. Wisconsin, however, is assured the top seed in the conference tournament this week by virtue of owning the best record in games involving the first-place teams.

The Terrapins held a two-game lead with five to go but lost three of four before defeating the Wolverines to finish 16-1 at home.

“We had it hanging over us for two weeks. We were in first place for almost four weeks,” Turgeon said. “There was a lot on our guys, and obviously this is a big weight off us.”

Anthony Cowan Jr. had 20 points and eight assists in his final home game at Maryland. The senior guard went 7 for 11 from the floor and made six free throws in the final minute.

Cowan came back for his senior season to help the team hang a banner on the rafters at the arena, and that's precisely what will happen.

“It's huge. These are the memories you're going to go through your whole life," Cowan said. “It can't get much better than that."

“I'm as positive as you can get," Howard said. “There's no reason to try to beat anyone's spirit down. All it's about is finding solutions and how we can improve to get better."

Michigan went 9 for 13 from the floor to start the second half, outscoring Maryland 25-15 to cut a 13-point deficit to 56-53 with 10 minutes left. Zavier Simpson led the surge with nine points on 4-for-4 shooting.

The Terps eased the pressure with a 9-2 run that included a pair of 3-pointers by Ayala. The margin never dipped below seven points the rest of the way.

After that, it was a countdown to a celebration that was long in the making — even if the Terps had to share the title.

“We won the Big Ten championship," Cowan said. “That's all that matters."

After a sellout crowd saluted Cowan and two other seniors, the Terrapins trailed early before Ayala scored six points in a 14-2 run that made it 18-9. Minutes later, Wiggins had a 3-pointer and a dunk in a 7-0 spurt that upped the margin to 12.

Smith ended the half with a 35-foot heave at the buzzer that hit the bottom of the net and put Maryland up 41-28.

Cowan made his school-record 130th consecutive start. He ranks first on the Maryland career list for free throws made (579), seventh in scoring, fifth in assists and third in 3-pointers made.

“Toward the end of his sophomore year, he didn't me and I didn't like him," Turgeon said. “He just wasn't being the point guard I thought he could be. ... Then he just changed his approach to the game and made the game easier."

Turgeon and Cowan embraced in a warm hug after the coach ceremoniously pulled the guard from the game in the final seconds.

Michigan: The hot-and-cold Wolverines enter the postseason in the midst of a cool spell. Michigan opened 7-0, then lost eight of 12. A 7-1 stretch followed before the current 1-3 slide.

Maryland: This was a must-win game entering the postseason. After blowing an opportunity to win their first outright title since 2001-02, the Terps got some momentum back and salvaged a piece of the crown.

Michigan opens play in the Big Ten Tournament on Thursday.

Maryland begins play in the Big Ten Tournament on Friday.