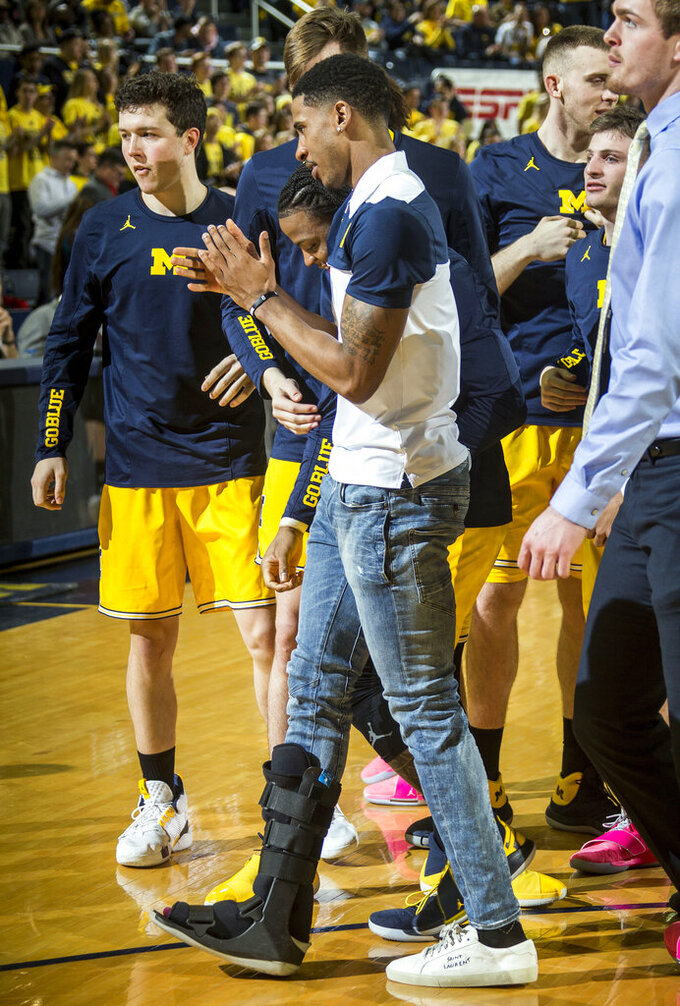 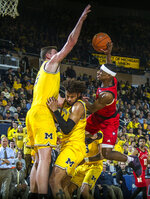 The Wolverines didn't miss a beat.

Jon Teske scored a career-high 22 points, and No. 9 Michigan easily rebounded from its loss to Michigan State with an 82-53 victory over Nebraska on Thursday night. The Wolverines were without Charles Matthews, out with a right ankle injury, but Isaiah Livers replaced him in the starting lineup and had 12 points and 10 rebounds.

"Charles, he does a lot of great things. I tried to replace him as best I could," Livers said. "Trying to grab 50-50 balls, just knock the open shots and go dunk on people's heads — that's Charles Matthews' game."

Livers started 22 games last season as a freshman, but this season, Michigan's starting five for its first 28 games was Matthews, Teske, Iggy Brazdeikis, Jordan Poole and Zavier Simpson. That finally changed because of the injury to the 6-foot-6 Matthews, who had a boot on the injured ankle. Coach John Beilein didn't give any details on Matthews' prognosis.

The Wolverines (25-4, 14-4 Big Ten) raced out to a 22-point halftime lead behind Teske and Brazdeikis. It was the last home game for Michigan, which finishes the regular season with trips to Maryland and Michigan State.

The Wolverines lost only once at home in 2018-19 — 77-70 to Michigan State on Sunday. That dropped Michigan a game behind the Spartans in the Big Ten title race, but the Wolverines still look formidable — and they weren't about to slip up against a struggling Nebraska team.

"If they're going to play for a conference championship, you can't lose at home — certainly can't lose at home to a 10th-place team," Cornhuskers coach Tim Miles said. "I think that just making shots early deflated our guys, but this is not a league to feel sorry for yourself."

Brazdeikis went down holding his left knee near the end of the first half, but he walked off without assistance and was back at the beginning of the second. He finished with 20 points.

Nebraska: The Cornhuskers nearly shook up the conference title race when they played Purdue tough over the weekend but lost by three. They put up little resistance against Michigan. James Palmer, Nebraska's leading scorer, was held to a season-low seven points.

"Obviously the wins aren't there and we've been racking up a lot of losses, but give credit to the teams we've played," forward Tanner Borchardt said.

Michigan: When Brazdeikis is shooting well, the Wolverines are tough to beat because they don't need as much scoring from Teske or Simpson. And when Teske is also contributing — the 7-foot-1 center made all three of his 3-point attempts Thursday — that's an additional bonus.

Michigan honored Matthews on senior night. He has a year of eligibility left but is a candidate to leave early for the NBA.

"He's one of the best kids I've ever coached," Beilein said. "He's a Kentucky transfer, and he just came in here and he just bought in a hundred percent."

Matthews, who has played two seasons at Michigan, briefly addressed the crowd after the game, expressing his appreciation.

Michigan took care of business while short-handed, but its next matchup this week is the more intriguing game.

Nebraska: The Cornhuskers will try one more time to be a spoiler in the race for first place, playing at No. 6 Michigan State on Tuesday night.

Michigan: The Wolverines play at No. 17 Maryland on Sunday.