No. 9 Tennessee pulls out 79-74 thriller over Arkansas 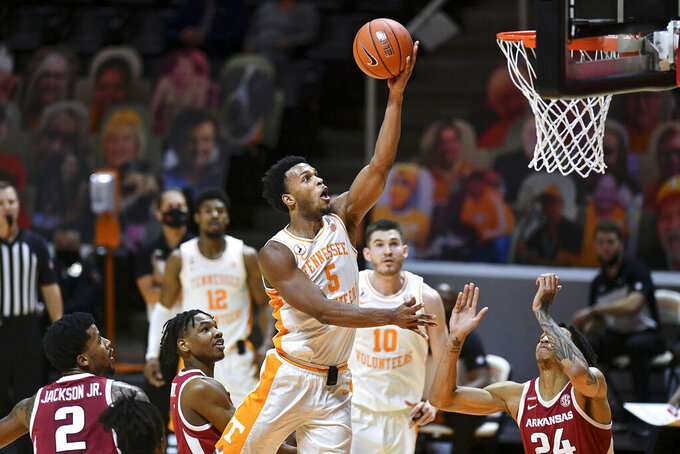 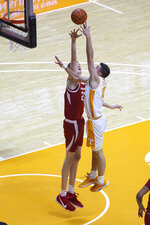 KNOXVILLE, Tenn. (AP) — Josiah-Jordan James and Victor Bailey scored 17 points apiece and Tennessee hit eight free throws in the final minute as the No. 9 Volunteers pulled out a 79-74 victory over Arkansas on Wednesday night.

John Fulkerson scored 12 of his 16 points in the second half and freshman Keon Johnson added 14 for the Vols (8-1, 2-1 Southeastern Conference).

Fulkerson scored seven of Tennessee's first nine points of the second half. About four minutes into the final period the Vols had erased their seven-point halftime deficit and tied the game at 42.

Rather than try to shoot over Arkansas' 7-foot-3 Connor Vanover, the Vols adjusted their strategy to go at him. Not only did Fulkerson come alive, but Vanover picked up three fouls in the first 10 minutes.

Jamie Notae had just five points in the first half for Arkansas (9-2, 1-2), but finished with 19, including a four-point play that momentarily stole the moment from Tennessee midway through the second half.

With just over a minute to play, Tennessee led 69-61. However, a couple of quick baskets by Notae and a 3-pointer narrowed the gap.

Arkansas: The Razorbacks are just starting to learn how to play without 6-foot-7 graduate student Justin Smith. While averaging 11.6 points and 7.1 rebounds, he went down with a high ankle sprain a couple of games ago. He will be out anywhere between two to five weeks. Against Tennessee, they went big, with Vanover starting in his place.

Tennessee: Alabama's victory over the Vols gave coach Rick Barnes plenty to think about. The physical, aggressive style of play by the Crimson Tide has challenged Tennessee to be better. After eight games with the same starting lineup, freshman Keon Johnson replaced Victor Bailey as a starter.

Arkansas: After just its second road trip of the season to play Tennessee, the Razorbacks will return home Saturday to play Georgia.

Tennessee: The Vols' first game away from Thompson-Boling Arena was last week when they knocked off unbeaten Missouri. They have two straight road trips ahead of them, starting with Texas A&M Saturday.