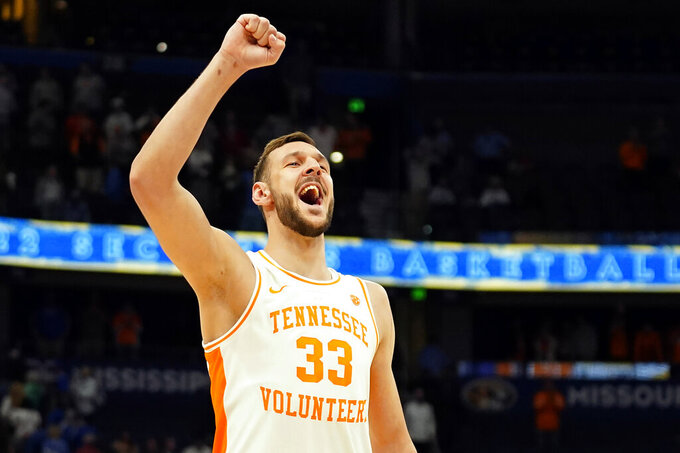 Tennessee forward Uros Plavsic (33) celebrates after they defeated Kentucky in an NCAA college basketball game in the semifinal round at the Southeastern Conference tournament, Saturday, March 12, 2022, in Tampa, Fla. (AP Photo/Chris O'Meara) 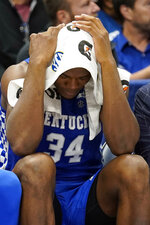 TAMPA, Fla. (AP) — No. 9 Tennessee just might be the Southeastern Conference's top team. The Volunteers certainly can make a strong case after their latest victory.

Kennedy Chandler scored 19 points, Zakai Zeigler added 11 and Tennessee held off fifth-ranked Kentucky 69-62 in the final minutes Saturday to reach the SEC Tournament final for the third time in the last five years.

The Vols (25-7) have won 11 of 12 and six in a row, including victories against fourth-ranked Auburn, 15th-ranked Arkansas and now the Wildcats in the last two weeks. They're one win away from a championship and potentially a No. 1 seed in the upcoming NCAA Tournament.

“People say, ‘Well, you might be better off to leave, go home and regroup,'" Vols coach Rick Barnes said. "I don’t know of any coaches that I’ve ever been around that thought like that.

“This time of year, every game is a playoff game. ... And you want to be playing your best basketball because we also know that it can go the other way real quick. You want to keep building that momentum," he said.

The Vols look ready for anything following their performance against Kentucky. They held the Wildcats (26-7) to 34.4% shooting, which included missing 18 of 20 shots from 3-point range. SEC player of the year Oscar Tshiebwe also was a non-factor for much of the afternoon.

“We were 2-for-20, folks,” Kentucky coach John Calipari quipped. “We could have won this game. I think we had a couple were air balls from good shooters, like the best shooter in the conference.”

Kellen Grady missed all five shots from behind the arc. TyTy Washington was 1 for 7 from distance.

Still, the Cats kept coming and forced two turnovers in the waning seconds to close within 65-62. But they missed four 3s in the final minute, with Keion Brooks, Grady, Washington and Sahvir Wheeler all misfiring. It was a fitting end to a frustrating day for the Wildcats.

Brooks led the way for Kentucky, ending up with 19 points. Washington had 17, and Wheeler 10.

The Wildcats had been penciled into a top seed in the NCAA field, but losing to Tennessee twice in three meetings could flip the script. Chandler, Ziegler and Josiah-Jordan James helped author the changes.

Chandler made 8 of 16 shots and seemingly had an answer every time third-seeded Kentucky looked like it would make a run in front of a pro-Big Blue crowd inside packed Amalie Arena.

“Coach Barnes has great trust in me and knows I’m going to deliver the ball to my teammates or find a great shot to get the ball,” Chandler said.

James finished with 10 points, including eight early as Tennessee built a double-digit lead. Zeigler came up big down the stretch, making three free throws that closed it out.

Tshiebwe had 13 points and 11 rebounds to notch his 15th consecutive double-double and 27th of the season, breaking the single-season mark set by Kentucky great Dan Issel in 1969-70. Tshiebwe played just 8 minutes in the first half because of foul trouble and fouled out with 3:37 to play.

“This was kind of an off-day for us,” Tshiebwe said. “We didn’t really make a shot. We still have our confidence, and we’re going to be ready next week."

Calipari will have to wait a year to potentially break the school record for most wins in the SEC Tournament. Calipari tied Tubby Smith with No. 24 in the quarterfinals Friday. He trails Florida’s Billy Donovan (27) and Alabama’s Wimp Sanderson (25).

Tennessee: The Vols won their regular-season meeting against Texas A&M 90-80 in Knoxville on Feb. 1.