No drama: No. 1 Zags roll past Fairleigh Dickinson in NCAAs 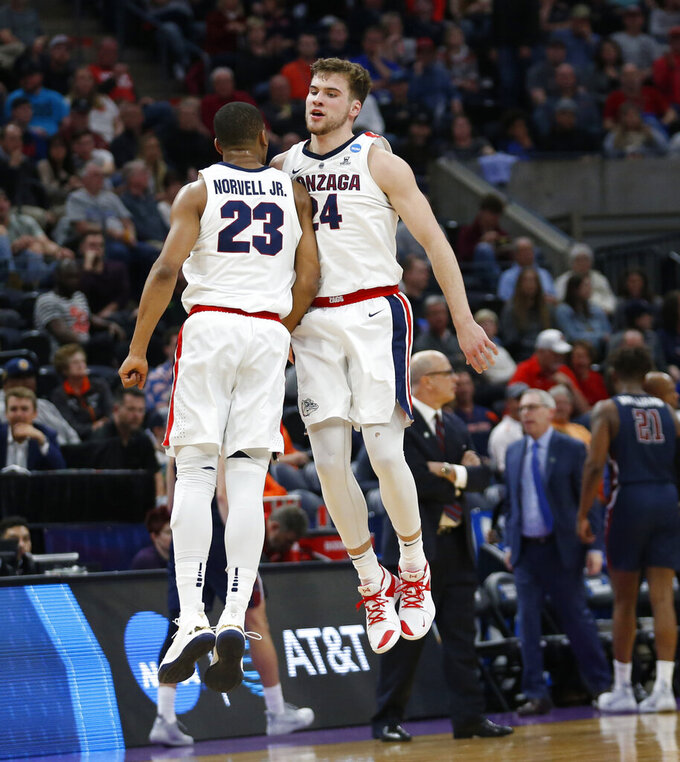 SALT LAKE CITY (AP) — When it comes to a 16 seed beating a 1, it's still true — anything really can happen in the NCAA Tournament.

Just not on Thursday night. And not against Gonzaga.

One year after dreamers and underdog lovers rejoiced at top-seeded Virginia's first-of-its-kind, first-round loss, the Gonzaga Bulldogs crushed any thought of a repeat with a wire-to-wire 87-49 thumping of Fairleigh Dickinson in the West Region.

Rui Hachimura led the Zags (31-3) with 21 points and eight rebounds, and this game looked every bit as lopsided as most of the 1-vs.-16 contests since 1985, when the bracket was expanded to 64 teams.

By the time Gonzaga turned it over when Josh Perkins tried flipping a no-look pass backward to Killian Tillie, coach Mark Few looked barely awake — sitting in his chair, cheek cupped in his hand. The Bulldogs led 70-34.

— Could the Knights (21-14) muster a repeat of their amazing shooting two nights earlier in a come-from-behind win over Prairie View A&M in the First Four? No. Fairleigh Dickinson shot 30 percent and went 6 for 21 from 3-point range. Its star from the win, Darnell Edge, had trouble getting any looks, let alone good ones. He went 2 for 11 for seven points.

— Would the Bulldogs feel any lingering aftershocks from their unexpectedly ugly loss to Saint Mary's last week in the West Coast Conference final? No. The nation's highest-scoring offense this season could've picked its number in this one. Few started emptying the bench at the 8:30 mark.

"I loved our intensity from the jump," he said.

Gonzaga is the only team to beat Duke and Zion Williamson at full strength this season, helping explain why the Bulldogs are the second favorite, at 5-1 behind the Blue Devils, to win it all. They put to rest any questions about whether they belonged on the 1 line over, say, Michigan State — a debate that picked up a bit of steam after the Saint Mary's loss.

"It's a different level and the Zags tonight showed that level," Herenda said. "It was plain and clear for anyone who was at the game."

While this loss was ugly, this season was one worth remembering for Fairleigh Dickinson. The Knights earned a piece of the Northeast Conference regular-season title for the first time since 2006, and returned to the tournament after a two-year absence during which they suffered through losing seasons.

They got the program's first NCAA Tournament victory, and all less than 12 months after Herenda wound up in intensive care while attending the Final Four in San Antonio last year with life-threatening blood clots and a high fever.

"Now the goal is to get back and win a first-round game, not a First Four game," Herenda said. "And that's hard."

A BASKET TO REMEMBER

For Fairleigh Dickinson's Nadi Beciri, it was not garbage time.

Sidelined for the last 33 games with a back injury, the fifth-year senior got into the game with the clock running down. He got the ball, made a basket and got fouled with 28 seconds left, then walked straight into a long embrace with his coach.

"It was truly a dream come true," Beciri said. "Being a fifth-year senior, and my career is over now. I've played basketball my whole life. It's an amazing honor to go out like that."

As a top seed for the third time, Gonzaga has now won its three games vs. 16 seeds by six, 20 and 38. All three of those victories have come in Salt Lake City. Gonzaga topped 80 points for the 27th time in 34 games.