No kneeling, cups tossed as Ole Miss falls to No. 7 Tenn 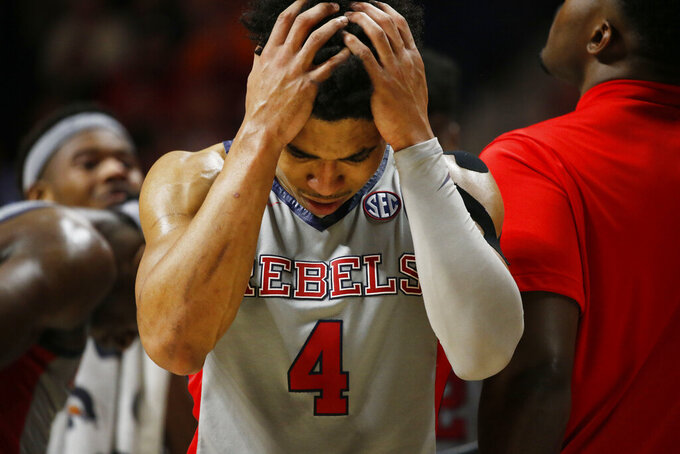 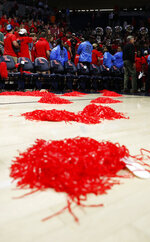 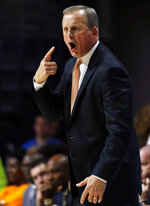 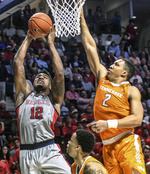 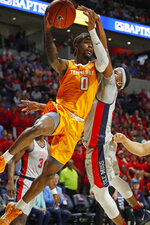 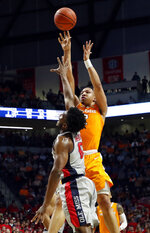 OXFORD, Miss. (AP) — Grant Williams barreled through the lane through two Mississippi defenders, somehow willing himself into a position where he could get a short jumper to fall for the go-ahead bucket with four seconds remaining.

Nothing's coming easy for No. 7 Tennessee these days. But the Volunteers will take wins however they can.

Williams scored 21 points, including his clutch basket in the final seconds, to lift Tennessee over Ole Miss 73-71 on Wednesday night. The win keeps the Volunteers in a three-way tie with LSU and Kentucky atop the Southeastern Conference standings.

"I thought both teams just played their hearts out. You expect that this time of year," Tennessee coach Rick Barnes said. "I just thought our guys found a way to stay in it and get it done at the end."

Tennessee (25-3, 13-2 SEC) bounced back from a tough loss to LSU on Saturday with a hard-fought victory over the Rebels. Lamonte' Turner added 17 points and Admiral Schofield had 11.

The Volunteers trailed 39-34 at halftime, but used a 14-0 run early in the second half to move back ahead. Ole Miss wouldn't go away, pushing in front 58-57 on Terence Davis' 3-pointer with 10 minutes left.

From that point forward, it was a back-and-forth struggle. Ole Miss guard Breein Tyree missed the front end of a one-and-one with 18 seconds remaining, Tennessee grabbed the rebound and Williams hit a driving, short jumper in the lane to make it 72-71.

"Those guys made the right plays down the stretch," Davis said. "You've got to tip your hat to them."

Ole Miss (19-9, 9-6) had one more opportunity in the final seconds, but Devontae Shuler was called for a charge after running into Schofield while shooting a deep 3-pointer with a second left. Ole Miss coach Kermit Davis was given a technical for arguing the call and throwing his jacket, but by that point the game was already decided.

Immediately after the game, angry fans threw cups and other objects on the floor, including several things in the direction of the Tennessee bench. Kermit Davis expressed regret for throwing his jacket in the final seconds and said "that probably enticed the crowd so I apologize for that. I was just being competitive in the moment."

"Everybody's heartbroken in that locker room," Davis said. "But we've got to come back tomorrow, put that away, and get ready for Arkansas on Saturday."

Tyree and Terence Davis led the Rebels with 16 points each. Blake Hinson added 14.

Tennessee scored the first eight points and led for most of the first half. Ole Miss rallied in the final minutes to take its five-point lead at halftime.

No Ole Miss players knelt for the national anthem before the game.

The minutes before the game were highly anticipated after eight Mississippi players kneeled during the anthem in response to a Confederacy rally near the arena before the Rebels' 72-71 victory over Georgia on Saturday.

But there were no obvious demonstrations before the Tennessee game, with players standing in their usual spot along the free-throw line in front of the Ole Miss bench.

Tennessee: It was a huge bounce-back win for Tennessee, which got the big shot it needed from Williams at the end. Turner's 17 points came on 8-of-12 shooting from the field. Tennessee shot nearly 52 percent, including 58 percent in the second half.

Ole Miss: A tough loss for the Rebels, who might have assured themselves a spot in the NCAA Tournament with a win. Bruce Stevens was a bright spot with 10 points and 10 rebounds. Ole Miss likely needs one more win to feel secure about its spot in the NCAAs. The Rebels have three games left, against Arkansas, Kentucky and Missouri.

Tennessee: Returns home to face No. 4 Kentucky on Saturday.