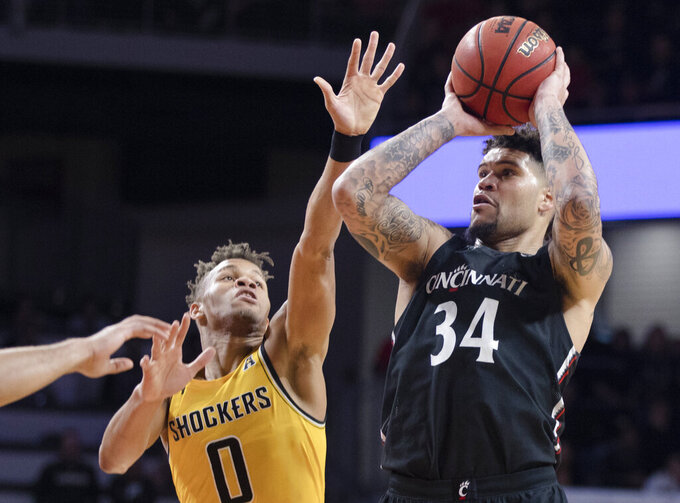 CINCINNATI (AP) — The ball left Jamarius Burton's hands at mid-court, and everyone in a Cincinnati uniform had a familiar, bad feeling.

If the ball found the net, the Bearcats would be going overtime yet again.

Not this time. The shot had too much on it, and Cincinnati ended its NCAA record-tying streak of overtime games Sunday, holding on for a 67-64 victory over Wichita State.

As it has for the last few weeks, it came down to the final shot.

“Your heart drops a little bit, once that ball leaves (Burton's hands),” said Jarron Cumberland, who had 24 points. “But we've got it.”

The Bearcats (18-9, 11-4 American Athletic) had gone overtime each of their last four games, matching the NCAA record. With only seconds left, it seemed that a fifth one could be at hand.

“I mean, it crosses your mind,” Cumberland said.

The Shockers (20-7, 8-6) couldn't extend the game, done in by their cold shooting in the closing minutes.

Cumberland led the way despite a poor shooting game. He went only 3 of 11 from the field, but made 16 of his 22 free throws, including one with 2.1 seconds left that provided the final margin.

Wichita State had its three-game winning streak snapped. Cincinnati has won six in a row over the Shockers, including an 80-79 victory on Feb. 6.

Jaime Echenique had 10 points and 12 rebounds for Wichita State.

Neither team led by more than five in a ragged first half that featured four ties and nine lead changes. Wichita State missed its last six shots in the half, helping Cincinnati put together an eight-point run for a 31-28 halftime lead.

“We made it about defense this week,” coach John Brannen said. "We felt we needed to play better. We just haven't been playing well, and it started with our investment, our physical and emotional investment.

The Shockers' cold shooting extended into the second half. They missed six of their first seven shots while Cincinnati pulled ahead 38-30.

Erik Stevenson scored six straight points for the Shockers, including a steal and layup, and Echenique had a three-point play that tied it 58-58 with 4:32 to go, but the Shockers went cold again at the end and never regained the lead.

After pulling even, Wichita State missed eight of its last nine shots from the field, allowing Cincinnati to hold on.

Wichita State: The Shockers lost three straight — a season high — in early February, including a home loss to Cincinnati and road losses at Tulsa and Houston. They've since refurbished their NCAA Tournament credentials but have a tough closing stretch.

Cincinnati: The Bearcats were coming off an 89-87 double-overtime loss at home to UCF on Wednesday that dented their NCAA Tournament chances and left them with little margin for error.

“That's a huge win for us, especially with the things we want to accomplish,” Cumberland said.

CLOSER, BUT STILL NOT QUITE

Wichita State hosts Temple on Thursday. The Shockers lost at Temple 65-53 on Jan. 15.

Cincinnati plays at Houston on Sunday. The Bearcats rallied at home to beat then-No. 21 Houston 64-62 on Feb. 1.