No.2 Duke and No. 3 Virginia get high-profile rematch 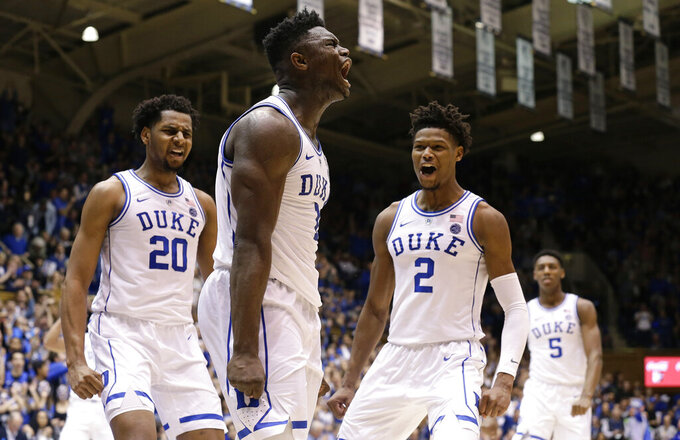 Duke and Virginia played one of the college basketball season's most entertaining, high-level games just two weeks ago.

The rematch comes Saturday. No. 2 vs. No. 3, Final Four favorites playing with the ACC lead potentially on the line.

Find a TV. This one's going to be good.

The Blue Devils won the first match-up 72-70 to hand the Cavaliers their first loss of the season after opening with 16 straight wins.

Duke's dynamic freshman duo of R.J. Barrett and Zion Williamson were at their best that day at Cameron Indoor Stadium, combining for 57 points in a back-and-forth game filled with highlight-reel plays.

The Blue Devils, then ranked No. 1, turned tables on the defensive-minded Cavaliers, holding them to one field goal during a nine-minute stretch of the second half despite playing without point guard Tre Jones due to a shoulder injury. Duke shot 63 percent in the second half against one of the nation's best defensive teams to bounce back from a loss to Syracuse earlier in the week.

The Blue Devils (19-2, 7-1 ACC) haven't slowed down since the Jan. 19 game and enter this week a half-game behind the Cavaliers in the ACC, tied with North Carolina. Duke stomped Notre Dame and St. John's last week with Jones back. The Blue Devils play Boston College on Tuesday.

Virginia bounced back from the Duke loss with four straight wins behind its still-stifling defense. The Cavaliers held Wake Forest to 45 points, Miami to 46 and have the nation's best scoring defense by more than four points per game at 52.9.

Virginia (20-1, 8-1) beat Miami without point guard Ty Jerome due to a sore back and his status for Saturday's game is still in the air.

The good news for the Cavaliers: Saturday's game is at John Paul Jones Arena, where they're 27-1 the past two seasons.

Virginia isn't the only team to get a rematch against the team that ended its undefeated season.

On Saturday, No. 7 Michigan will host No. 19 Wisconsin. The first meeting, on the same day Virginia lost to Duke, the Badgers ended the Wolverines' unblemished run at 17 straight games with a 64-54 victory .

Ethan Happ had 26 points and 10 rebounds, helping Wisconsin pull away in the final minute, setting off a court rushing by its fans. The Badgers have not lost since, stretching their winning streak to five games with an eight-point win over then-No. 21 Maryland.

Michigan is coming off its second loss of the season, 74-59 to Iowa last Friday.

Saturday will also feature a game that could go a long way to determining the Big East regular-season title.

No. 10 Marquette has the higher ranking, but No. 14 Villanova has the Big East lead by a game after opening conference play 9-0. The Golden Eagles have won eight straight since opening the Big East with a loss to St. John's.

Marquette's high-scoring guard Markus Howard against the defending national champions' defense is going to be fun to watch.

This week will feature two big rivalry games: No. 13 Kansas at Kansas State on Tuesday and No. 4 Gonzaga hosting Saint Mary's on Saturday.

The Jayhawks have been up and down since big man Udoka Azubuike was lost for the season in early January to a hand injury, with three losses their last five games. The Wildcats have won six of seven and will be playing at home.

Gonzaga has yet to lose in West Coast Conference play and has two losses all season. The Zags' road the WCC title almost always goes through the Gaels, who are 5-3 in the WCC.

This week's slate includes two other games between ranked opponents.

On Saturday, No. 16 Louisville plays at No. 22 Florida State. The Cardinals, at 8-2, still have a shot at catching Virginia, North Carolina and Duke to win the ACC regular-season title. The Seminoles need to get a roll going after opening conference 4-4.

Sunday will feature a key American Athletic Conference game when No. 25 Cincinnati hosts No. 12 Houston. Both are atop the AAC at 8-1 and the Bearcats are ranked for the first time this season after winning seven straight games. The Cougars have won six straight since their only loss of the season, Jan. 9 against Temple.