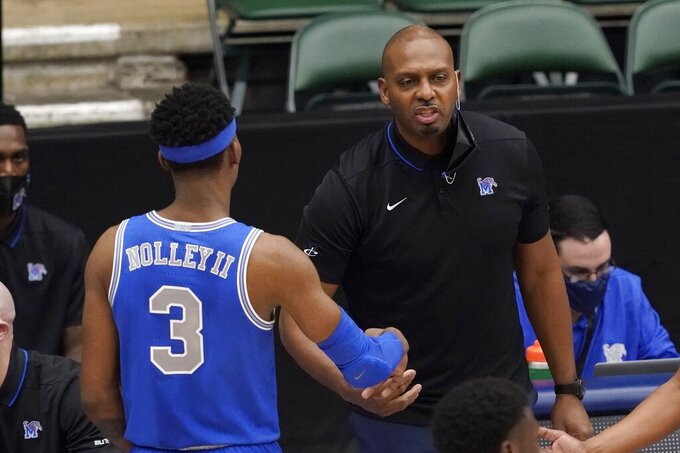 Memphis guard Landers Nolley II (3) walks off the court and is greeted by head coach Penny Hardaway, right, in the second half of an NCAA college basketball game against Colorado State in the semifinals of the NIT, Saturday, March 27, 2021, in Frisco, Texas. (AP Photo/Tony Gutierrez)

Landers Nolley II scored a career-high 27 points with seven of the Tigers' season-high 14 made 3-pointers, and they advanced to their first NIT championship game since winning the title in 2002 with a 90-67 semifinal win over Colorado State on Saturday.

“I’m proud of the team. Our most complete game all year was today, even though we started off kind of slow, still scored 90 points," Hardaway said. “For multiple guys to get hot on the same night, I’ve been asking for that all year and today’s game was one of those games.”

Memphis will hope for one more of those on Sunday, when it faces Mississippi State in the title game.

Nolley scored 24 of his points after halftime, after Lester Quinones made three 3s in a 22-2 run in the first half that put the Tigers (19-8) ahead to stay. DeAndre Williams finished with 21 points for Memphis, and Quinones had 18 with four 3s.

Memphis' last NCAA Tournament was 2013-14, and the Tigers just missed this year. They are 10-2 since the start of February with a pair one-possession losses six days apart against NCAA Sweet 16 team Houston. Their last four losses have been by a combined eight points.

Sixth-ranked Houston won 76-74 in the American Athletic Conference tournament semifinals, five days after hitting a last-second 3 at home to beat the Tigers 67-64 in the regular-season finale.

The Tigers were instead a No. 1 seed in the NIT, which was reduced from its usual 32 to 16 teams and is being played in North Texas because of the coronavirus pandemic that led to the event's cancellation last year. It is the first time the final NIT games are being played outside of New York City.

Hardaway says it takes a lot keep his team from getting distracted during a game, but that he doesn't expect any lack of motivation Sunday.

“I don’t think so because it’s for the championship," Hardaway said. “We’re playing good basketball. We know who we are.”

After Roddy started the second half with a 3 to get Colorado State within three points, Memphis responded with a 16-3 run that included seven points from Nolley.

“We let their shooters have too many rhythm 3s,” Colorado State coach Niko Medved said.

The Rams led 21-15 on a jumper by Stevens midway through the first half, and his 3 in the final minute cut the halftime deficit to 44-38. But they had several shooting droughts, and were 39% overall (20 of 52) against the Memphis pressure defense.

“They are so unique in what they do,” Medved said. “It's not anything we were not ready for, or surprised by. We just didn't execute the way we needed to.”

The Tigers wore jerseys that read “Memphis State" that they got just before the AAC tourney. That was the name of the school when Hardaway was a standout player in the early 1990s — the school formally changed to University of Memphis in 1994.

“I’m very superstitious. So we’re winning with them, why are we going to get out of them? It’s no disrespect to the University of Memphis or anything. Still the same thing to me,” Hardaway said. “And we’re wearing those because we’re winning in them.”

The NIT championship game, more than 1,500 miles from Madison Square Garden, with the Tigers facing the fourth-seeded Bulldogs on Sunday. Colorado State plays in the consolation game against Louisiana Tech, which lost 84-62 in the other semifinal game.