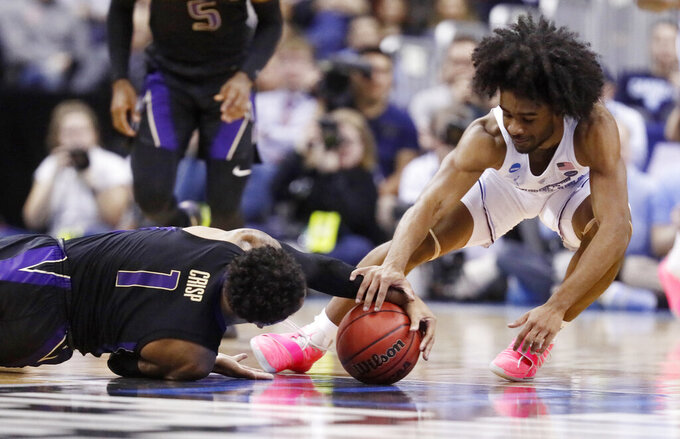 Washington's David Crisp (1) and North Carolina's Coby White (2) battle for a loose ball in the first half during a second round men's college basketball game in the NCAA Tournament in Columbus, Ohio, Sunday, March 24, 2019. (AP Photo/John Minchillo) 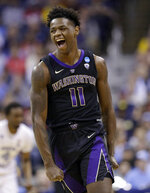 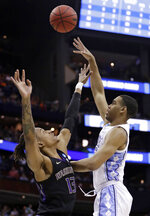 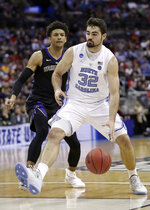 COLUMBUS, Ohio (AP) — After making an early exit from the NCAA Tournament last season, North Carolina breezed to the Sweet 16.

Luke Maye and Nassir Little each scored 20 points and the top-seeded Tar Heels beat Washington 81-59 Sunday. They never trailed and moved on to face fifth-seeded Auburn on Friday in a Midwest Regional semifinal.

Last year, one season removed from its national championship, North Carolina was routed by Texas A&M in the second round. The Tar Heels (29-6) were determined it wasn't going to happen again.

"We talked about it all summer," said Maye, who had 14 rebounds and his 15th double-double of the season. "I feel like it's just a testament to how hard we worked and get back to the spot. And I think it's been great to see how many guys have grown this season and really stepped up."

The Tar Heels, a No. 1 seed for a record 17th time, committed 10 turnovers in the first half and led by eight points at the break. They bolted out in the second half, put together a 13-0 run over 5 minutes, played great defense and pulled away.

"The key today was getting the ball to the middle," said Tar Heels guard Cameron Johnson, who finished with 13 points. "The middle was a soft spot. They were covering the wings and the perimeter pretty well. And once we got it inside, it was basically a 2-and-1 for an easy jump shot or a dump down. And I think we exploited that a lot more in the second half than we did the first half."

Pac-12 player of the year Jaylen Nowell paced Washington (28-8) with 12 points. Noah Dickerson and Nahziah Carter each had 10.

"I thought they got us everywhere ," Huskies coach Mike Hopkins said. "They got us in the high post. They got us on the 3. They got to the foul line. And, unfortunately, I thought we got some good looks. We just had one of those shooting nights. When you play against a team like this, almost everything has to go right. You don't have a large margin for error. And we just didn't have enough."

Little turned a second straight impressive performance in the tournament. The 6-foot-6 freshman was 8 of 11 shooting with seven rebounds after chipping in 19 points in 17 minutes in the win over Iona on Friday night. He averaged nearly 10 points per game throughout the season.

North Carolina forward Garrison Brooks took an elbow to the mouth in the first half that knocked out one tooth, chipped another and required stitches to close his cut lip. He returned to start the second half. Guard Kenny Williams left the game early in the second half holding his left hamstring, but he returned later in the half and seemed OK.

Washington: The Huskies have come a long way after going 9-22 two years ago before longtime Syracuse assistant Hopkins took over. They beat No. 9 seed Utah State in the first round but were never seriously in the game against North Carolina.

North Carolina: The Tar Heels rolled to a 41-33 lead at halftime behind the 3-point shooting of freshman Coby White — he 4 for 5 from beyond the arc in the half — and kept the pressure on.

"They were trying to have somebody in front of him the whole game," North Carolina coach Roy Williams said. "And he picked his spots. And I thought he really did a nice job for us. He didn't have many opportunities the second half because they tried to cover him more, but he was good."

White and Little combined for the most points (37) by any freshmen pair in the tournament since 2006. ... Washington's 59 points were the fewest allowed by UNC in the tournament since they held Vermont to 58 in the first round in 2012. ... Washington was making its first NCAA appearance since 2011 ... Maye has 21 career games with 20 points or more. He has 15 this season.

North Carolina moves into the Sweet 16 in Kansas City, Missouri.