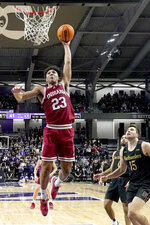 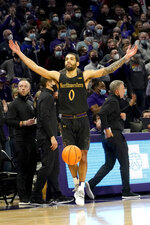 EVANSTON, Ill. (AP) — Boo Buie had 16 points and Chase Audige scored eight of his 12 points in the second half and Northwestern beat short-handed Indiana 59-51 on Tuesday night for the Wildcats' third straight win.

Five different players scored for Northwestern (12-10, 5-8 Big Ten) in a 13-0 run to take a six-point lead about five minutes into the second half. Indiana assistant coach Kenya Hunter was assessed a technical foul and Ryan Greer made the first of two free throws to make it 36-35 with 15:49 left on the Wildcats led the rest of the way. He missed the second but it went out of bounds off the Hoosiers and Pete Nance missed a 3-point shot before Greer scored on a put back 39 seconds later. Nance missed a driving layup but Audige grabbed the rebound and kicked it out to Robbie Beran for a 3 to make it 41-31 with 14:27 to play.

Race Thompson scored 14 points for Indiana and Trey Galloway added 13 before he fouled out with 2:36 remaining. Trayce Jackson-Davis had his ninth double-double of the season and finished with 13 points, 11 rebounds, three blocks and two steals.

Nance, who went into the game leading the Wildcats at 15.3 points per game, scored six points on 2-of-10 shooting and grabbed 10 rebounds.

The Wildcats shot just 32% from the field — Indiana made 20 of 54 (37%) — but committed just six turnovers and finished with 15 more field-goal attempts than the Hoosiers. Northwestern scored 14 second-chance points off 16 offensive rebounds.

Indiana trailed for just 49 seconds in the first half and Anthony Leal made a 3-pointer before Thompson made a layup to give the Hoosiers their largest lead at 35-28 about two minutes into the second half.

Indiana plays at No. 17 Michigan State on Saturday. Northwestern plays Sunday at No. 13 Illinois.