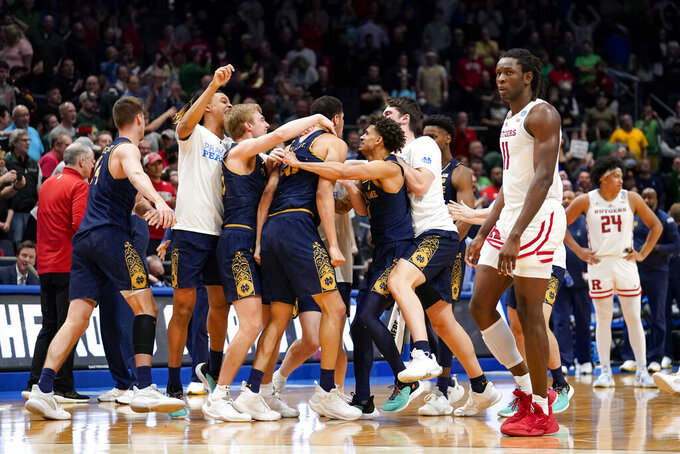 DAYTON, Ohio (AP) — Paul Atkinson Jr. was in the right place at the right time for Notre Dame as the clock wound down in the second overtime period against relentless Rutgers.

Atkinson rebounded a missed shot by Blake Wesley and put back a layup with 1.4 seconds left to give the Irish an 89-87 win in a wild First Four game and put them into a first-round West Region contest on Friday in San Diego.

“Well, let me start by saying Happy St. Patrick's Day to everyone here,” Notre Dame coach Mike Brey said. “And you notice that Paul's shot went in at 12:02 (EDT) on St. Patrick's Day, so maybe there was a little bit of karma there.”

Atkinson, a graduate transfer from Yale and former Ivy League Player of the Year, capped his finest game of the season, leading the Irish with 26 points and six rebounds.

“Blake, I saw him driving to the rim,” Atkinson said. “I knew he was going to go hard, either get a foul or make a bucket. I just wanted to follow up if it was a miss and no call. I just wanted to chase after the ball. Got it up and got a good bucket.”

Ron Harper Jr. had tied it with a long 3-pointer for Rutgers with 22 seconds left in the second OT before Atkinson won the scrum under the basket and put up the winner.

“They were one possession better," Rutgers coach Steve Pikiell said.

“I haven’t felt like this in a long time,” Atkinson said. “It’s amazing. Bunch of cameras on you. Big spotlight, last game of the night. Definitely got my teammates to cheer with. It’s just awesome. Got family up in the stands. Couldn’t ask for anything better.”

Caleb McConnell, the Big Ten Defensive Player of the Year, had a career-high 23 points and Harper had 22 for the Scarlet Knights (18-11), who had knocked off five ranked teams on their conference schedule.

Both teams shot a respectable 51% for the game.

McConnell scored 18 points on 8-of-9 shooting from the floor as Rutgers built a 41-36 lead at the half. He put the finishing touches on the scoring before intermission, going the length of the court and putting up a fast-break layup at the buzzer.

Rutgers went up by eight to open the second half on Harper's 3-pointer, but Notre Dame chipped away. The Irish got up by as many as five late before the game got tight again.

Geo Baker's 3-pointer tied it at 69 for Rutgers with 1:24 left. Rutgers got the ball back, but Harper and Baker both missed shots that would have given the Scarlet Knights the win in regulation.

“We have an unbelievably gritty group,” Ryan said. “We don't quit. I mean, so proud of how we played and battled. And our fight, man, you really can't teach that.”

“If there's a better game in the NCAA Tournament, I gotta see it,” Brey said. “That was an unbelievable college basketball game. And they're really good. And tough. And fearless. And I'm really proud of our group because we just kept hanging in. We've grown a lot in the mental toughness area.”

Notre Dame: Fought back from a halftime deficit, wouldn't go away and finally found a way to win it.

Rutgers: The Scarlet Knights played well enough to win, but didn't take advantage of chances to put away the Irish.

Notre Dame advances to a first-round game Friday against No. 6 Alabama in San Diego.