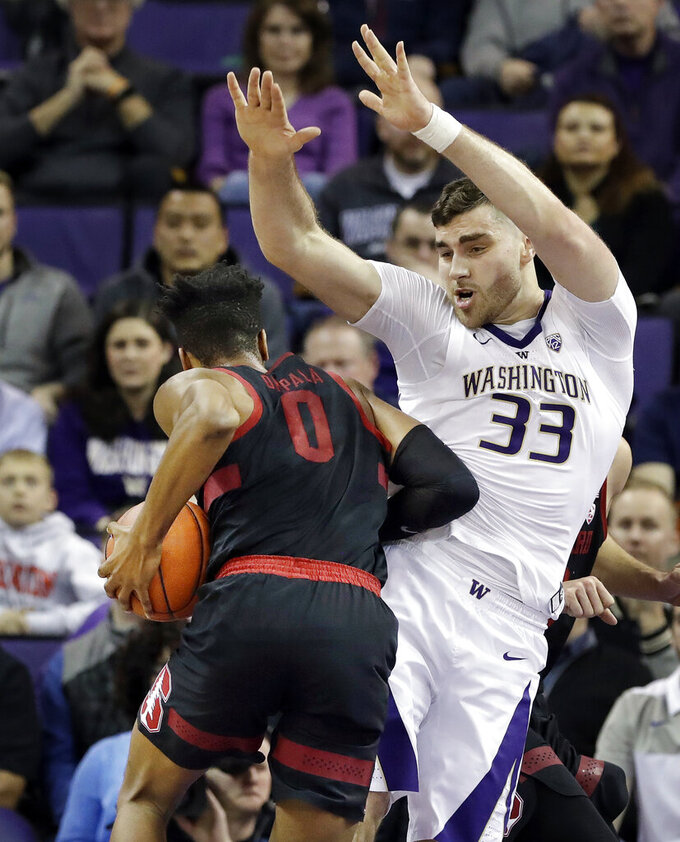 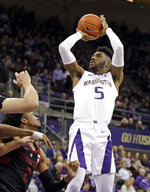 SEATTLE (AP) — While it's still very early in conference play, Washington is learning it won't need to lean on just one or two players to help carry the Huskies through the Pac-12 season.

The Huskies are getting contributions throughout their rotation, and why Washington is 4-0 in conference play for the first time since the 2012-13 season.

"It could be a different guy every night. I think that's why we're 4-0 right now because some guys might have off nights but we've got eight or nine real contributors that can go in there and play well, impact the game well with energy, with shots, with whatever it may be," Washington coach Mike Hopkins said. "That's what we're trying to build. It's the hardest thing to do and the easiest thing to say."

Jaylen Nowell scored 22 points, Nahziah Carter made 6 of 7 shots and added 13 points off the bench and Washington won its sixth straight game with an 80-64 victory over Stanford on Thursday night.

The Huskies (13-4, 4-0 Pac-12) remained perfect early in conference play thanks to a big first half by Nowell and a lift off the bench from Carter, Washington's improving sophomore wing. Nowell had 14 points in the first half, while Carter had 11 points in the final 20 minutes.

"That's what Coach likes to tell us and I guess he likes to tell you guys that, it can be a different guy every game," Carter said. "We really believe that."

Coming off its first road sweep in conference play in six years, Washington continued to strengthen its case that it may be the best team in a season where the Pac-12 as a whole is down. The play of Nowell remained a big reason. The sophomore made 9 of 19 shots, finding midrange openings in Stanford's defense and knocking down a couple of important 3s in the first half as Washington took control with an early 18-4 run.

KZ Okpala led Stanford (8-9, 1-4) with 22 points and Josh Sharma added 17. Okpala, the second-leading scorer in the Pac-12 had a troublesome first half trying to figure out Washington's zone defense, but rallied to score 18 in the second half.

Okpala, the sophomore drawing NBA interest, had a forgettable first half, hitting 1 of 6 shots and picking up a technical foul, scoring just four points. His second half showed why NBA teams have interest in the 6-foot-9 forward with a mix of midrange jumpers and driving baskets.

"He should have been frustrated in the first half. I don't think he touched the ball very often and when he did it wasn't in a position to really do anything," Stanford coach Jarod Haase said. "Our pace was horrendous in the first half and not very good in the second half."

Washington led by as many as 16 early in the second half but a scoring drought allowed the Cardinal to cut the deficit to single digits on Okpala's driving basket with 10:16 left. Green finally snapped Washington's skid without a field goal, hitting his third 3-pointer to push the Huskies lead back to 12. Carter added a baseline dunk and Washington had a 58-44 lead with 8 minutes remaining.

Stanford: The Cardinal continued to struggle with turnovers and had trouble with the franticness caused by Washington's zone defense. Stanford committed 18 turnovers, the vast majority of those coming in the first 25 minutes. Stanford has averaged 15.5 turnovers per game and has yet to have a game this season with single-digit turnovers.

Washington: The Huskies scored 24 points off Stanford turnovers and outscored the Cardinal 32-10 in bench points. While Carter and Green provided the biggest lifts, Washington also got a boost from Sam Timmins, who played a season-high 22 minutes.

Hopkins was pleased with Washington's perimeter defense, especially in the first half. The Cardinal were 3 of 15 on 3-pointers after shooting 33 percent and making more than seven 3s per game on average this season. He was unhappy with Washington's transition defense in the second half. After giving up zero fastbreak points to Stanford in the first 20 minutes, the Cardinal had 19 transition points in the second half.

Washington picked up its 999th win all-time at Hec Edmundson Pavilion. It's already the most for any arena in the country. The Huskies will go for win No. 1,000 on Saturday.

Stanford: The Cardinal will take on Washington State on Saturday.