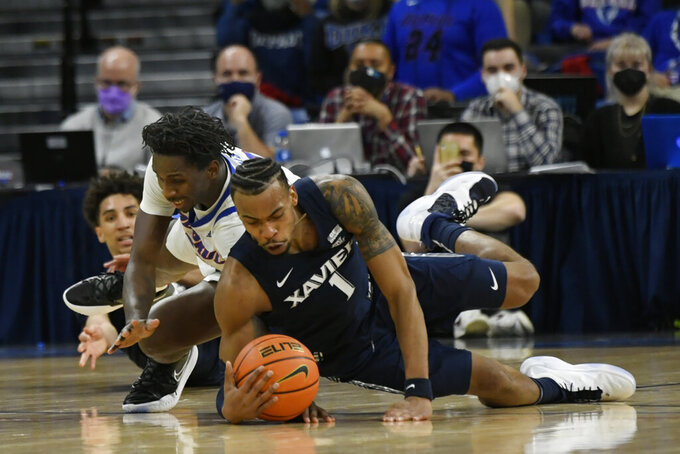 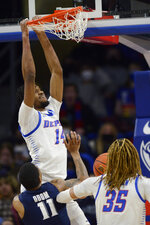 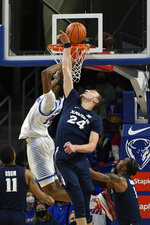 CHICAGO (AP) — Xavier coach Travis Steele liked the result. That was about it.

Jack Nunge scored 15 of his 23 points in the second half, and the 20th-ranked Musketeers edged DePaul 68-67 on Wednesday night.

Colby Jones had 13 points for Xavier (14-3, 4-2 Big East), which trailed by 10 early in the second half. Paul Scruggs had eight points and seven assists, but he also committed six of the Musketeers' 14 turnovers.

Xavier also surrendered 16 offensive rebounds, leading to 12 second-chance points for DePaul. The Blue Demons finished with a 37-35 edge on the glass.

“We got to be better, and I hold ourselves to a higher standard,” Steele said. “I felt like we just had some weird turnovers, some bad turnovers. We got punked on the glass. That just can't happen.”

The Blue Demons played without Javon Freeman-Liberty, who was held out after he aggravated a groin injury during Thursday’s 96-92 victory over Seton Hall. The senior guard is averaging a team-high 21.1 points per game.

Coach Tony Stubblefield said he isn't sure if Freeman-Liberty will be available for Saturday's game at Creighton.

“His health is the most important thing, so we want him to be healthy when he does come back,” Stubblefield said. “We don't want him rushing back and then he re-aggravates the injury. So we would rather he comes back 100 percent.”

Playing without Freeman-Liberty, the Blue Demons still had the lead for most of the night. David Jones got a fortunate bounce on a 3-pointer and Nick Ongenda drove the baseline for a dunk to make it 62-56 with 5:50 to go.

But Xavier came right back. Nunge made a 3-pointer and a slick layup to put the Musketeers in front at 67-65 with 2:02 remaining. He also made a tiebreaking foul shot with 1:15 to go.

“We have warriors in our locker room, from top to bottom,” Nunge said. “We have guys who don't get fazed by the little things. They stick with it and they keep going.”

A Xavier turnover provided one more chance for DePaul in the final seconds, but Jalen Terry missed a 3 as time expired.

“I told those guys ‘I don’t want David Jones to win the game. Make somebody else shoot the ball,'” Steele said.

The Musketeers got off to another slow start, and David Jones took advantage. The sophomore forward had 20 points in the first half on 8-for-12 shooting, helping the Blue Demons to a 36-34 lead at the break.

“We had some critical breakdowns the last 13 to 14 minutes of that game that really cost us," Stubblefield said. “But I thought our guys really scrapped. ... We still got to be more connected defensively."

Led by Nunge, Xavier's reserves outscored their counterparts 33-15. Adam Kunkel had eight points for the Musketeers while playing through an illness.

Xavier: It was ugly for the Musketeers for much of the night, but they turned up their defense to escape with the road win. The Blue Demons shot 38.7% from the field in the second half.

DePaul: Hoping to build on the win over Seton Hall, the Blue Demons came up just short. They wasted an 11-for-29 performance from 3-point range.

Xavier: At Marquette on Sunday afternoon.

DePaul: At Creighton on Saturday.