Oats trying to bring fun, wins back to Alabama basketball 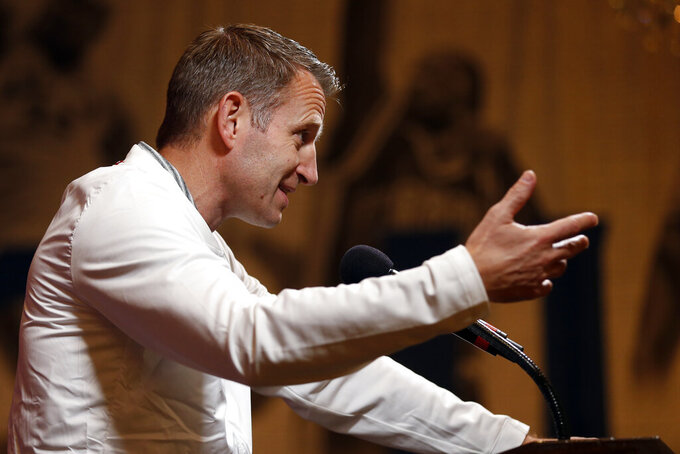 The Alabama point guard figures some of that attitude will translate to the team under the Crimson Tide's first-year coach.

"He demands your all every possession, no matter the circumstance," Lewis said. "He doesn't back down and I feel like he has a swagger about himself.

"I just feel like when he walks in, he feels like he's the best and that's the kind of coach you want to be with."

Oats may be the kind of coach Alabama needs. He left Buffalo to replace Avery Johnson at a program that has made only two NCAA Tournaments since 2006.

He took over a team led by guards Lewis, John Petty and Herbert Jones that seemed to underachieve last season. The Tide finished 18-16, lost in the first round of the NIT and finished with a losing record in the Southeastern Conference after opening league play with an upset of Kentucky.

Oats is looking to eliminate some of that inconsistent play.

"How does a team that was able to beat Kentucky in Game 1 last year not finish better than what we did in the SEC last year?" Oats asked somewhat rhetorically.

It's his job to figure that out and fix it. The former high school coach and math teacher led Buffalo to three NCAA Tournaments in four seasons as head coach.

He takes over a team led by Lewis, who averaged 13.5 points as a 17-year-old freshman and the second-youngest player on a Division I roster. Petty was the team's top 3-point shooter and Jones a top defender who's been working on his jump shot.

But a frontcourt that already must replace top rebounder Donta Hall had two post players go down to knee injuries.

The first order of business has been to start changing the culture of the program.

"We wanted to get the culture back where they actually enjoyed playing basketball again," Oats said. "I think that goes along with playing at the pace we play and getting in the gym, developing their games."

And winning, which seems to always change the culture of a program.

Some other things to know heading to Alabama's 2019-20 season:

Lewis was Oats' first big "recruit" after entering the transfer portal following the coaching change. The 6-foot-3 Lewis, who turned 18 in April, has gained some 10 pounds up to a still-slender 170 pounds.

He had weekly reports on his weight with Oats, who thinks Lewis is good enough to turn pro after this season.

Alabama lost forwards Juwan Gary and James Rojas likely for the season with preseason knee injuries. That gives an opportunity for Alex Reese to play a much bigger role. Oats said Jones and Petty both could play the position in smaller lineups.

Like the team overall, Oats would love to see more consistency out of Petty, a dangerous outside shooter who scored 30 against Tennessee but had some games where he was mostly a nonfactor offensively. Lewis thinks Petty has improved his all-around game.

"People try to label him as a shooter, but I don't see it as much," Lewis said. "In practice he's getting to the rim. He's gotten stronger, he's more focused on defense. I just feel like his mentality has changed."

Alabama is hoping the NCAA will grant a waiver for Villanova transfer Jahvon Quinerly, a former five-star recruit. The point guard played in 25 games for the Wildcats as a freshman last season.

Alabama plays nonconference games against teams like North Carolina and Penn State but the SEC schedule opens in brutal fashion. The Tide's first four league games include visits to preseason No. 2 Kentucky and No. 6 Florida along with home games against Mississippi State and No. 24 Auburn.