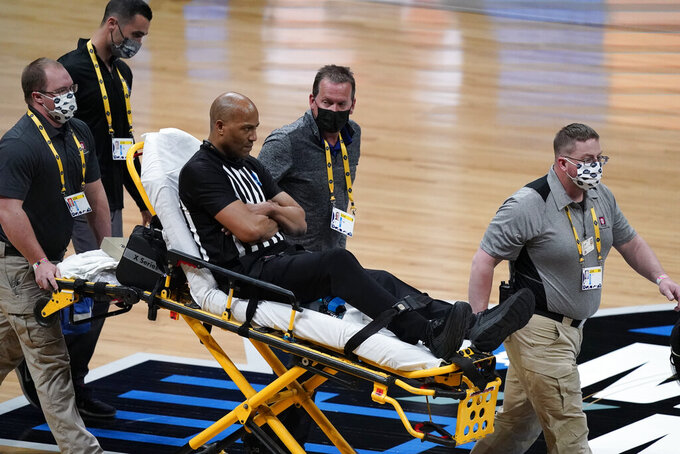 INDIANAPOLIS (AP) — Official Bert Smith collapsed on the floor early in the Elite Eight game between Gonzaga and Southern California and had to be taken off the court on a stretcher.

Smith had just set up on the baseline as the Trojans were moving onto offense when he collapsed and hit his head on the floor.

He stayed down for about five minutes, and then was able to stand up and move to a nearby stretcher. He was alert and sitting up with his arms crossed as he was taken off the court.

In a statement, NCAA spokesman David Worlock said Smith is “alert and stable,” and won't be transported to a hospital. Worlock also said Smith has been in contact with his family.

Worlock's statement didn't specifically state the nature of Smith's “medical issue,” though CBS Sports rules analyst Gene Steratore said on the TBS broadcast that Smith was feeling “lightheaded," leading to the fall. He said Smith was being treated by trainers in the locker room.

The matchup was the 70th game Smith has worked this season, according to kenpom.com. He has officiated in multiple conferences.

This story has been corrected to show the replacement official is Tony Henderson, not Williams.