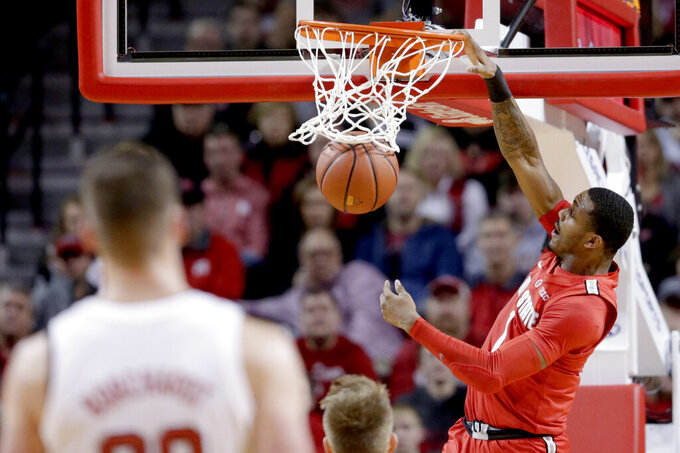 LINCOLN, Neb. (AP) — The shot clock was about to hit zero when Ohio State's Luther Muhammad launched a shot from behind the key. The ball hit the front of the rim, bounced off the backboard and dropped straight through.

"To be honest, every time I let it go I feel like it's good," Muhammad said. "That one, that was a straight heat check. I just felt like, 'Today's my day. God is on my side today.' "

That funky 3-pointer — Muhammad's third in a five-minute span of the second half — stemmed the momentum Nebraska was starting to generate and helped carry the Buckeyes to a 70-60 win that ended their longest losing streak in 21 years.

Muhammad scored 18 of his career-high 24 points in the second half, including two other 3s during a 20-5 run that propelled the Buckeyes (13-6, 3-5 Big Ten) to their first win in six games.

"This group has been pretty tied together even through as hard a stretch as any of us could have dreamed of," OSU coach Chris Holtmann said. "They've stayed together, and finally some things went our way."

James Palmer and Glynn Watson Jr. combined for 37 points to lead the Cornhuskers (13-7, 3-6), who have lost three straight games and five of seven. Nebraska played without Isaac Copeland for all but a minute of the second half after he landed awkwardly when colliding with an Ohio State player under the basket. The athletic department announced Saturday night that Copeland tore the anterior cruciate ligament in his left knee and is out for the season.

Ohio State started breaking open the game after Nebraska took its last lead, 38-36. The Buckeyes badly beat the Huskers on the boards, 45-31 overall and 14-7 on the offensive end.

Disgruntled fans gave a sarcastic cheer when Nebraska got a long rebound of a missed Ohio State 3-pointer with about 6½ minutes left. A good number of them walked out at the next timeout.

Nebraska went 6:19 without a field goal in the second half against Ohio State's 2-3 zone and without Copeland on the floor.

C.J. Jackson and Andre Wesson scored 10 points apiece for the Buckeyes, and Kaleb Wesson had 11 rebounds to go with his seven points.

Palmer had 19 points and Watson had 18 for the Huskers, who shot 36.2 percent from the field.

"We're blowing opportunities," Nebraska forward Isaiah Roby said. "We know every game is going to be tough. We're getting less and less opportunities to make a name for ourselves and make some momentum."

Ohio State: The Buckeyes played like a desperate team, bringing the game to the Huskers to end their longest losing streak since 1997-98. Muhammad played his best all-around game with six rebounds, two assists and three steals to go with his 24 points.

Nebraska: The Huskers are nothing like the team that won 11 of its first 14 and cracked the top 10 in the NET rankings. They put a lot of emotion into their home game against Michigan State last week, and that 70-64 loss seems to have resulted in a long hangover. A road loss to Rutgers on Monday and Saturday's loss to the Buckeyes made for a horrible week for Miles.

Copeland tore the ACL in his left knee a minute into the second half. The senior forward, who scored eight points, was the Huskers' second-leading scorer for the season, averaging 14.3 points per game.

"I am broken hearted for Isaac," Miles said. "He is a young man who had every option available to him last spring, but wanted to come back and help lead the Huskers back to the NCAA Tournament and beyond. He has meant so much to our program and has been a valued leader in the Husker basketball family since arriving on campus two years ago."

"I didn't necessarily look at as whether you lose one game or five games. It's miserable. Obviously, the misery was compounded five times. I don't look at this as fun times are here again. We've got to continue to be tough-minded." — Holtmann, on the end of the losing streak.