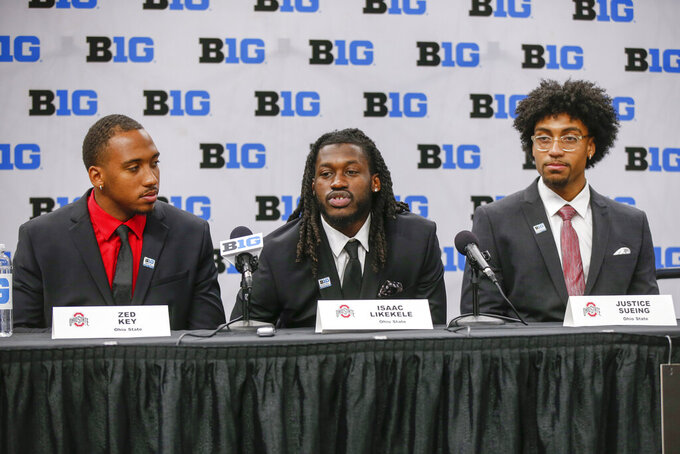 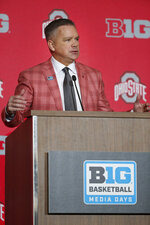 COLUMBUS, Ohio (AP) — Most of Ohio State's roster has turned over since the Buckeyes finished their season in the second round of the last NCAA Tournament.

Coach Chris Holtmann will have a lot to learn about the identity of what essentially is a new team, with a nationally regarded recruiting class and a trio of highly regarded transfers. Ohio State will have 10 newcomers among the 14 on the roster. Six are first-year players.

“Maybe with the exception of our first year when we were implementing a different coaching style, a different system, but it’s been more than I’ve ever had to do with this number of young guys,” Holtmann said.

Forwards Zed Key and Justice Sueing and guard Eugene Brown III are three of the four returning Buckeyes. Kalen Etzler, a 6-foot-8 forward who redshirted a year ago, is expected to make his college debut.

The Buckeyes went 20-12 (12-8 Big Ten) last season. They claimed a No. 7 seed in the NCAA Tournament and were bounced in the second round by second-seeded Villanova.

Malaki Branham, the Big Ten Freshman of the Year, and veteran star E.J. Liddell were selected in the NBA draft, leaving Ohio State with some big holes to fill.

“We’re still defining what our group is going to be like,” Holtmann said. “How this group evolves can be really exciting. But I think we’re determining that on a day-to-day. We’ll see how this group works over an extended period of time.”

The Buckeyes averaged more than 72.1 points per game in each of the last three seasons but ranked near the middle of the pack in the Big Ten in scoring defense.

The Buckeyes dropped five of their last seven games in which they allowed at least 71 points, including a 71-68 loss to Penn State in the second round of the conference tournament.

“A little more athleticism, more versatility, a little more length at the rim, I think, were all things that we needed to address," Holtmann said.

Ohio State’s 2022 recruiting class ranked in the top 10 in the country, highlighted by a quartet of four-star players.

Forward Brice Sensabaugh hails from Orlando and was named Florida Mr. Basketball last year. The Buckeyes will also have high hopes for Felix Okpara, a 6-11 center from Lagos, Nigeria, while three-star guard Bowen Hardman from Cincinnati rounds out the recruiting class.

After two seasons in which he collected 24 starts and hit 58.2% of his shots, it’s Key’s turn to provide a veteran voice on a Buckeyes team with many new faces.

“It’s been tough here and there being a leader because I’ve always had older guys to look up to, but now I’m one of the older guys,” Key said.

Holtmann turned to the transfer portal to bring in Tanner Holden from Wright State, Isaac Likekele from Oklahoma State and Sean McNeil from West Virginia.

Holden scored 37 points to help the Raiders win their first NCAA Tournament game in the First Four last spring, Likekele started more than 100 games in four seasons with the Cowboys, and McNeil knocked down 57 3-pointers last season for the Mountaineers.

“I think everybody out here can do a little bit of everything,” Holden said.

Sueing started all 31 games for the Buckeyes in 2020-21 before abdominal and groin injuries limited him to just two outings last season. The 6-foot-6 forward said he's almost fully healthy again and ready to go.

Ohio State opens Nov. 7 against Robert Morris and has two more home games before playing in the Maui Invitational beginning Nov. 21. The first Big Ten game is against Rutgers on Dec. 8.