Oklahoma frustrate No. 12 Arkansas in 1st loss of season 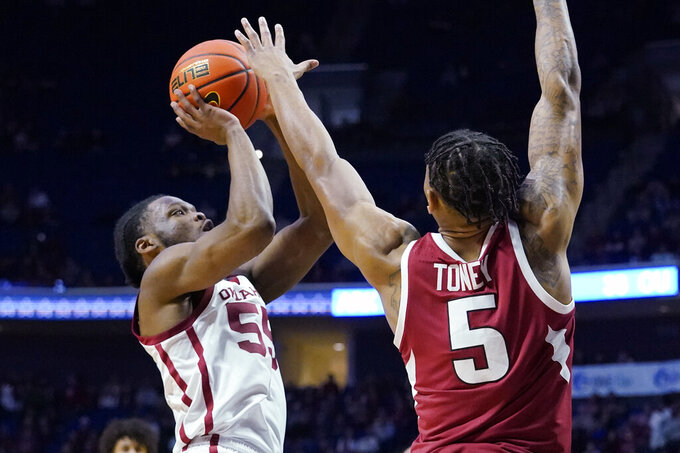 TULSA, Okla. (AP) — In a neutral site matchup of future SEC opponents, Arkansas had the shorter drive over but the longer drive home.

Elijah Harkless had 21 points and 11 rebounds as Oklahoma handed the 12th-ranked Razorbacks their first loss of the season, frustrating their coach and top shooters in an 88-66 romp Saturday.

Arkansas (9-1) never caught up and coach Eric Musselman was assessed two technical fouls and ejected with 3:30 to play. He was restrained by his assistant coaches while arguing with an official, and Jordan Goldwire hit four free throws that made it 76-57.

Musselman had no comment on the officiating after, but plenty to say about his team’s poor shooting and lack of tenacity while praising OU for the same.

“Harkless, I thought he was phenomenal,” Musselman said. “Through toughness and sheer desire, he had an incredible game.”

JD Notae, who had been leading the Razorbacks with nearly 19 points a game, was held to 13 on 3-for-14 shooting. Davonte Davis scored a career-high 26 for Arkansas.

Tanner Groves had 16 points, including a 3-pointer that pushed OU’s lead to 69-57 with 6:02 left and seemed to deflate the Razorbacks. Goldwire scored 14, Umoja Gibson 12 and Jalen Hill 11.

Down by 15 early in the second half, Arkansas closed to with 57-54 on three free throws by Notae with 9:55 left, but the Sooners pulled away steadily from there.

“There was no panic when Arkansas made it a one-possesson game,” Oklahoma coach Porter Moser said. “Over and over we responded, time and time again.

“Jordan Goldwire had his best floor game for us so far this year. I think he really controlled a lot of tempo. He got guys shots. From Harkless, I saw toughness. I think he really took the Butler game to heart (when OU lost a 13-point second-half lead.) I just saw an edge to him.”

Arkansas: Will have to search for ways to generate more consistent offense on nights when Notae is struggling. Davis picked up a lot of the slack but second-leading scorer Au’Diese Toney finished with just six points on four shots.

Oklahoma: Looked much more cohesive on both ends after dropping a home game to Butler. The Sooners have two non-conference tuneups under new coach Moser remaining before Big 12 play begins Jan. 1.

Arkansas had won 17 consecutive regular-season games dating to last season. Its last loss was also in Oklahoma, by four points at Oklahoma State on Jan. 30, 2021.

The Sooners had Arkansas scratching its way back in the game in both halves. The opening 13-0 salvo set the tone for the the first half, then OU quickly rebuilt its lead to 15 in the second half with an 11-2 run