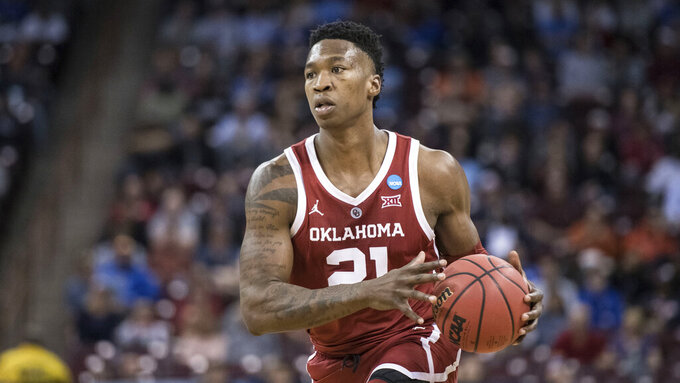 FILE - In this March 22, 2019 file photo, Oklahoma forward Kristian Doolittle (21) looks to pass the ball against Mississippi during the first half of a first-round game in the NCAA men's college basketball tournament in Columbia, S.C. The Sooners believe they have building blocks in forwards Kristian Doolittle and Brady Manek and guard Jamal Bieniemy.(AP Photo/Sean Rayford, File)

NORMAN, Okla. (AP) — Outside expectations are lower than usual for Oklahoma.

Scoring leader Christian James, guard Rashard Odomes and center Jamuni McNeace and graduate transfers Miles Reynolds and Aaron Calixte are gone from last year's NCAA Tournament team. Their departures are among the reasons the Sooners have been picked to finish eighth in the 10-team Big 12 this season.

The Sooners believe they have building blocks in forwards Kristian Doolittle and Brady Manek and guard Jamal Bieniemy. With transfer guard Austin Reaves, a solid recruiting class and a strong team work ethic, coach Lon Kruger sees the potential for a good team.

"Found out early on that the versatility is going to be a strength," he said. "I think the depth will be a strength. A lot of guys are interchangeable parts, chance to play bigger or smaller depending on maybe opponent or the play of our guys."

Manek averaged 12.2 points and 5.9 rebounds last season and was second on the team with 57 made 3-pointers.

Kruger said Doolittle, Manek and Bieniemy have helped bring the newer players up to speed.

"The three guys returning have done a terrific job of helping them understand what needs to be done, understand what lies ahead," he said. "Any time it comes from player to player, it's much more effective than it's coming from coach to player. They've done a good job."

Freshman guard De'Vion Harmon is one of the newcomers expected to have an immediate impact. He was one of 12 top-ranked high school seniors to represent Team USA in the 2019 NIKE Hoops Summit. He won gold at the 2017 FIBA Americas U16 Championship and 2018 FIBA U17 World Cup. He was named a four-star recruit by ESPN, Rivals and 247Sports.

He sat out last year and put on 20 pounds of muscle. He has left an impression on his teammates.

"He shoots that thing," Harmon said. "He's gotten me a few times in practice. And I've got him a few times. His range is unbelievable. I'd give him the rock every time."

Bieniemy averaged 4.9 points per game last season as a freshman and led the team with 3.5 assists and 1.4 steals per contest. He stepped in as a starter at midseason and helped the Sooners reach the second round of the NCAA Tournament. Reaves watched Bieniemy grow up last season and now believes he's ready for leadership responsibilities.

"He was very, very consistent from when he got here," Reaves said. "He did the things he had to do. Stayed on the court and really built a lot of trust through the coaching staff."

Four Oklahoma players have ties to Africa. Forward Victor Iwuakor was born in Abuja, Nigeria. Forward Anyang Garang was born in Kampala, Uganda, and moved to Australia as a refugee. Center Rick Issanza is from Kinshasa, Congo, and forward Kur Kuath is from Biemnon, South Sudan.

The Sooners open Nov. 5 at home against UTSA. They will play two games at Chesapeake Energy Arena in Oklahoma City this season: Jan. 25 against Mississippi State in the Big 12/SEC Challenge and Feb. 25 against Texas Tech. The conference schedule is tough, with Kansas, Texas Tech and Baylor all in the preseason Top 25.